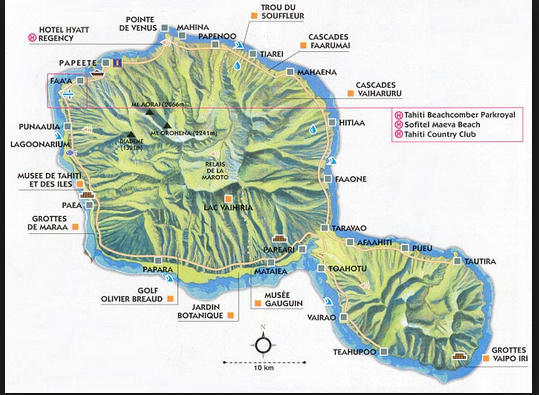 Chris did sail from Mazatlan to Papeete, Tahiti with two other fellows.  (He will write his own blog about that.) After he arrived in Papeete he decided it would be a good idea to fly to Spokane, get me, and bring me back to cruise around the South Pacific.  When I went to the Spokane airport to pick up Chris, he arrived sporting the beard he had grown during the crossing, and wearing his big hat. I didn’t recognize him.  I wondered why this strange guy kept smiling at me as he exited the plane.

He arrived just in time to fix a couple of things. I had managed to break the washing machine in Jes’s rental house in Spokane and Jes’s roommate had bashed a hole in the wall in the stairway when he was moving a desk.  So we spent the next few days buying a used washing machine, spackling the hole, and painting. (Jes and another roommate got their rental deposit back when they moved out because everything was in perfect order.)

Our crew, Rex, was boat sitting but Chris wanted to rush back to Tahiti in time for the Bastille Day celebrations. Since Tahiti was a possession of France we assumed there would be at least a parade. Chris had been in France one summer to see the celebration in Paris. 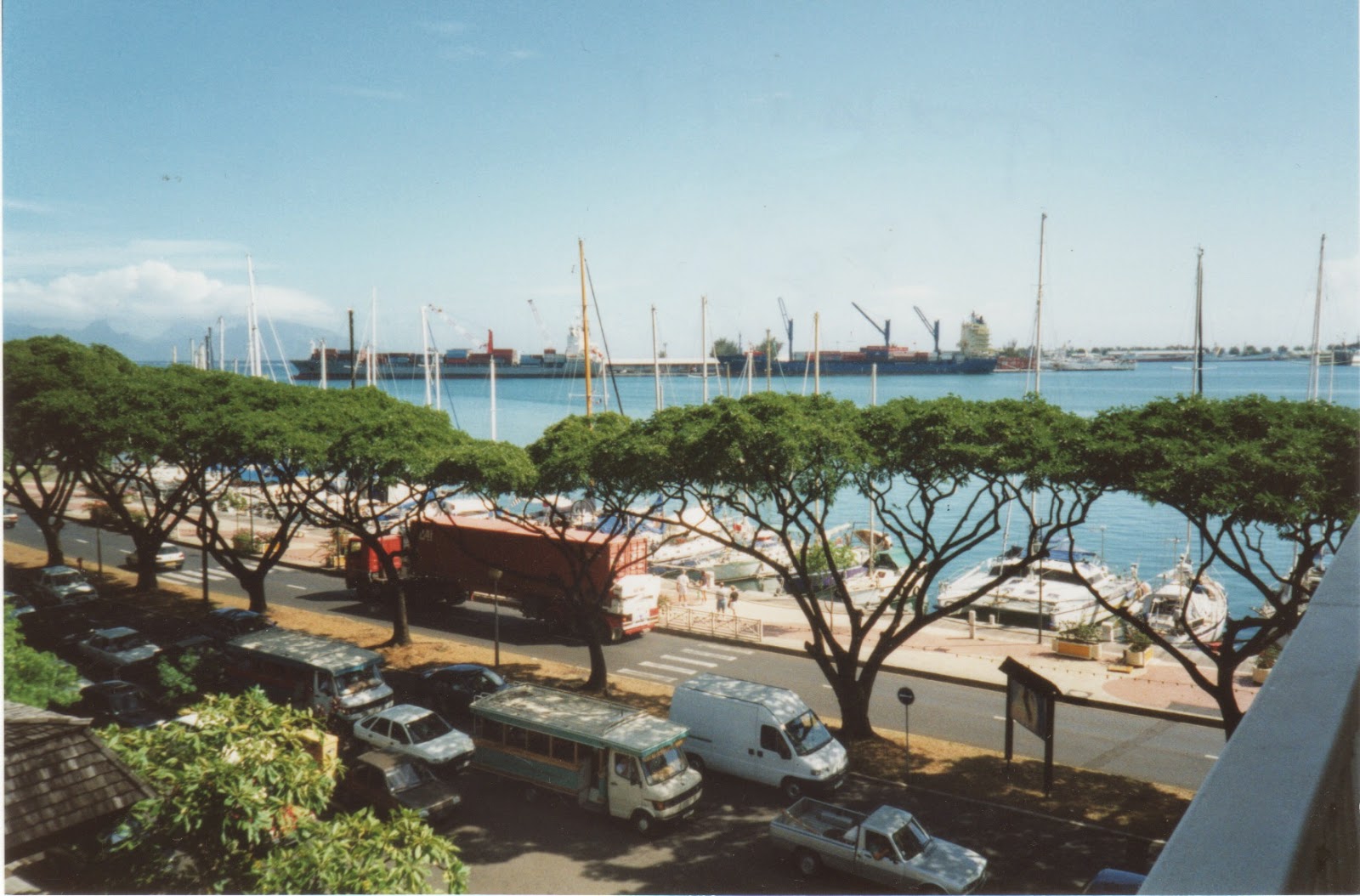 We checked into a hotel right across the street from where Flyaway was moored.  The morning of July 14 nothing happened.  Above is the view from the hotel window.  I assume they don’t celebrate July 14 in Tahiti.

Our first lunch cost about $50.00.  We ordered two sandwiches and two sodas. That was the last lunch out.  Everything is outrageously expensive. 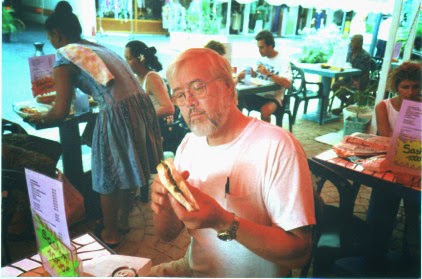 We decided to sail to Bora Bora.  I was seasick the whole way.  I had never been that sea sick in my life.  I assumed it could have been that flying so much had ruined my ears, or that the jet lag got to me.  Open water did not agree with my stomach so we stayed around Bora Bora and ate once at Bloody Mary’s. Chris and Rex would take the dingy to town for supplies. 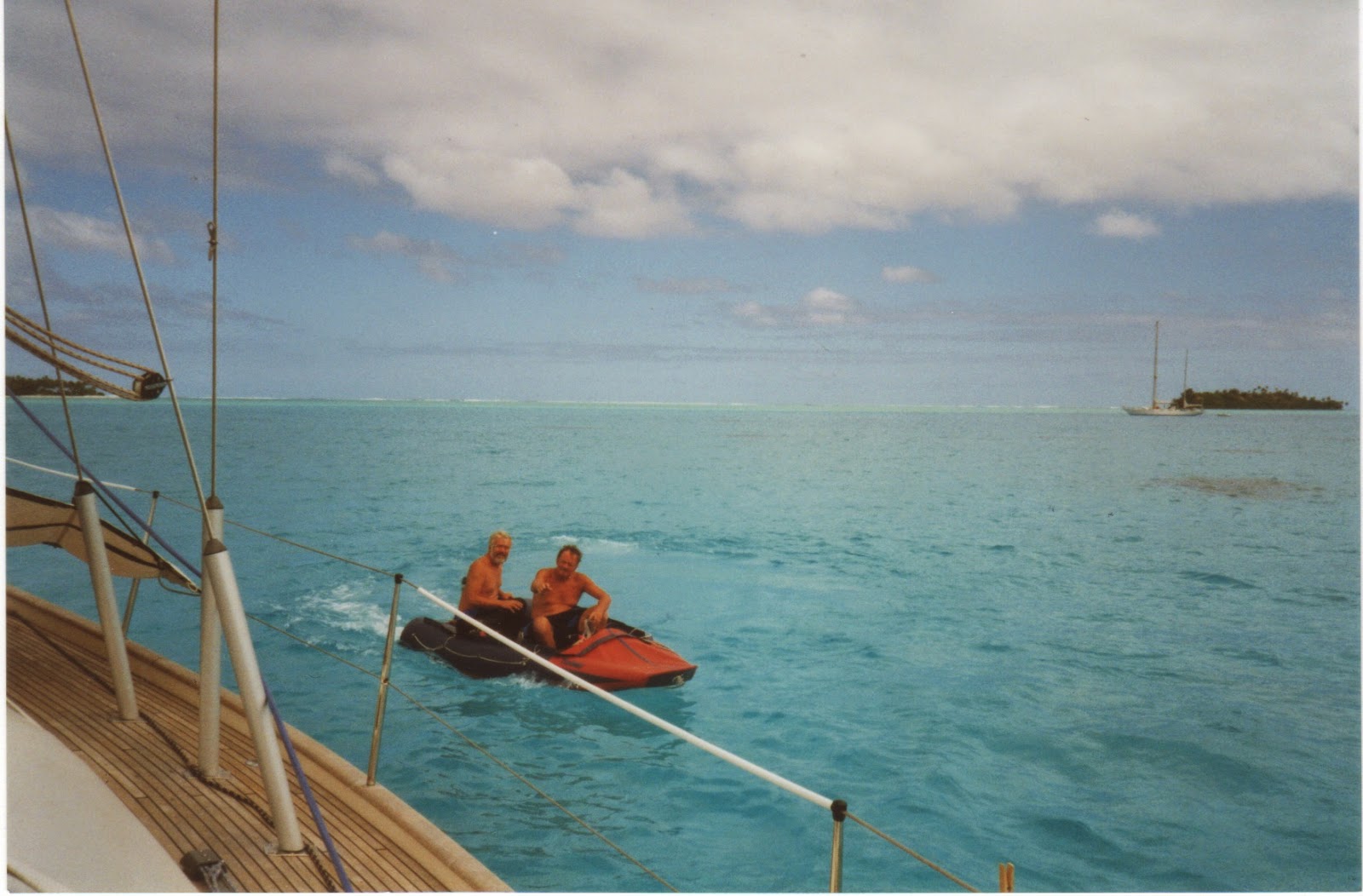 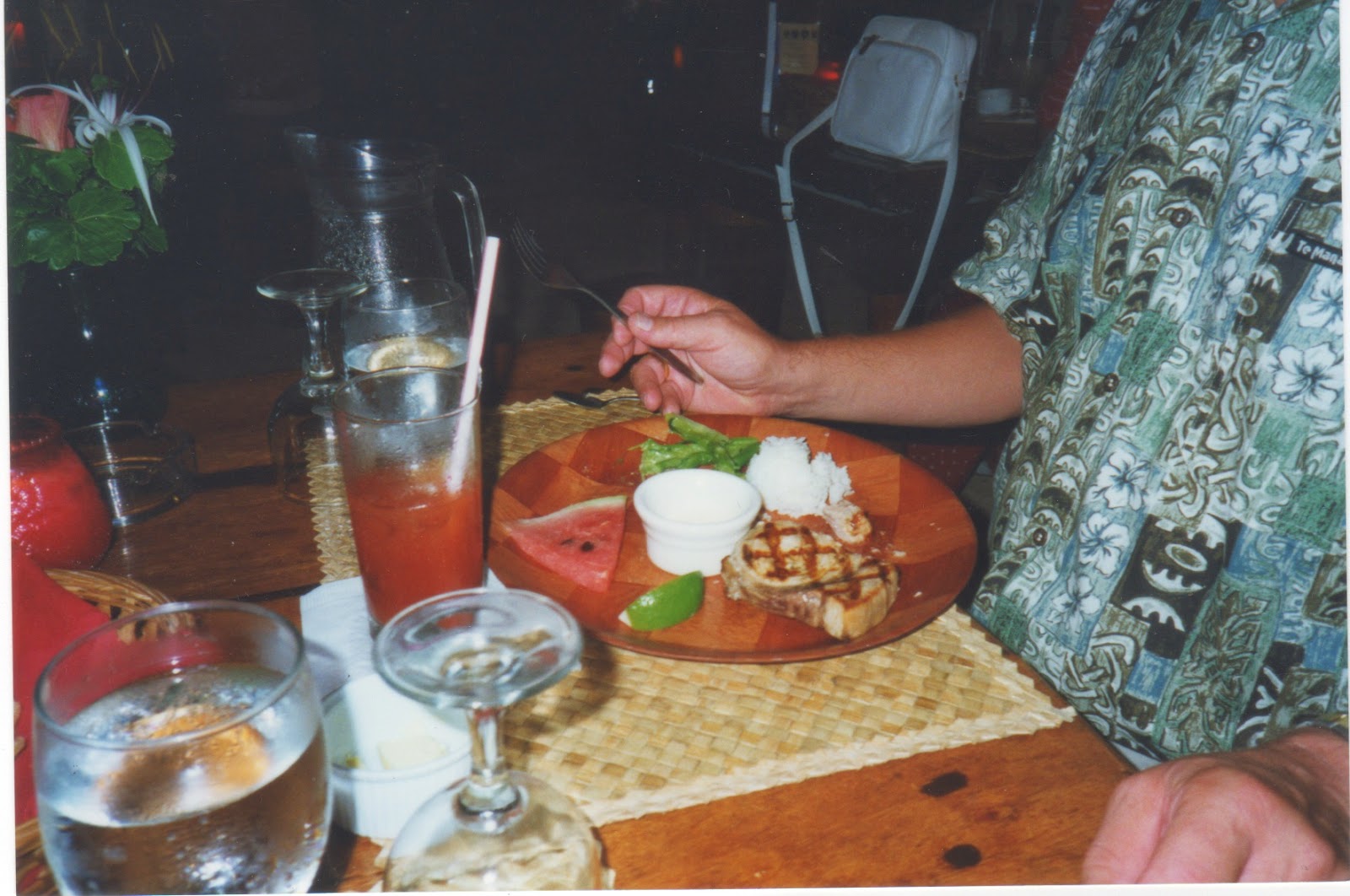 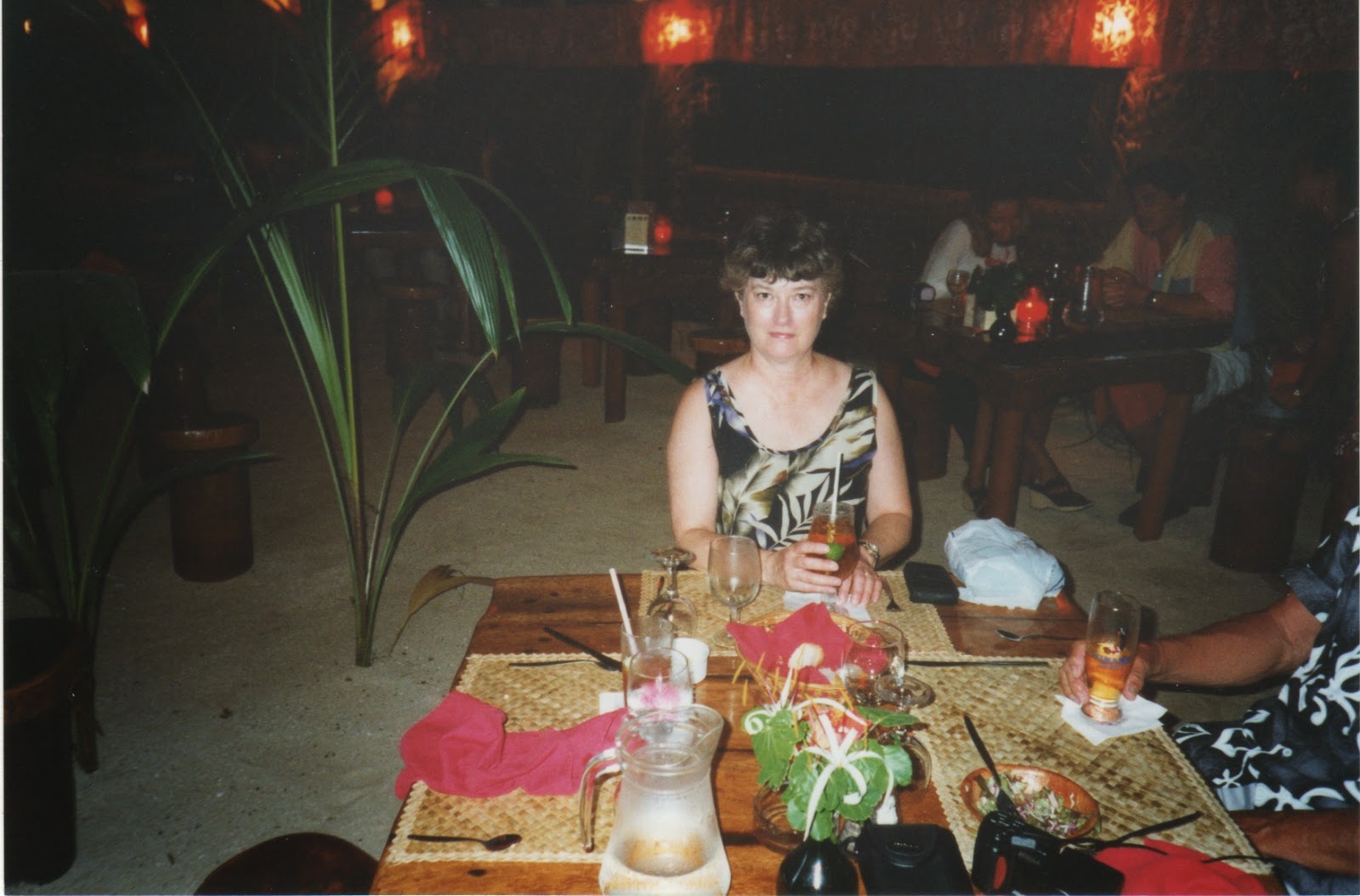 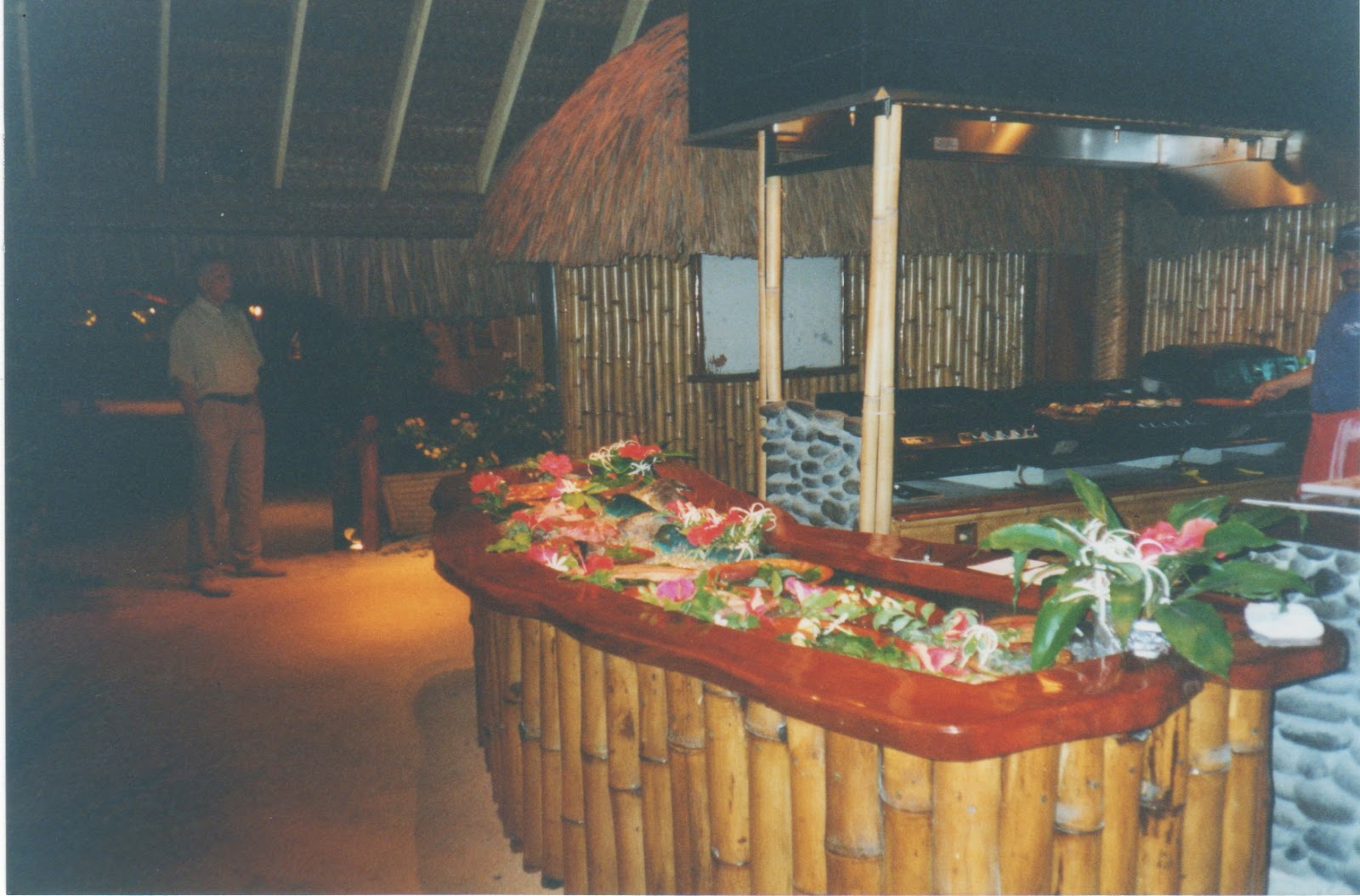 We chose our entree from the display 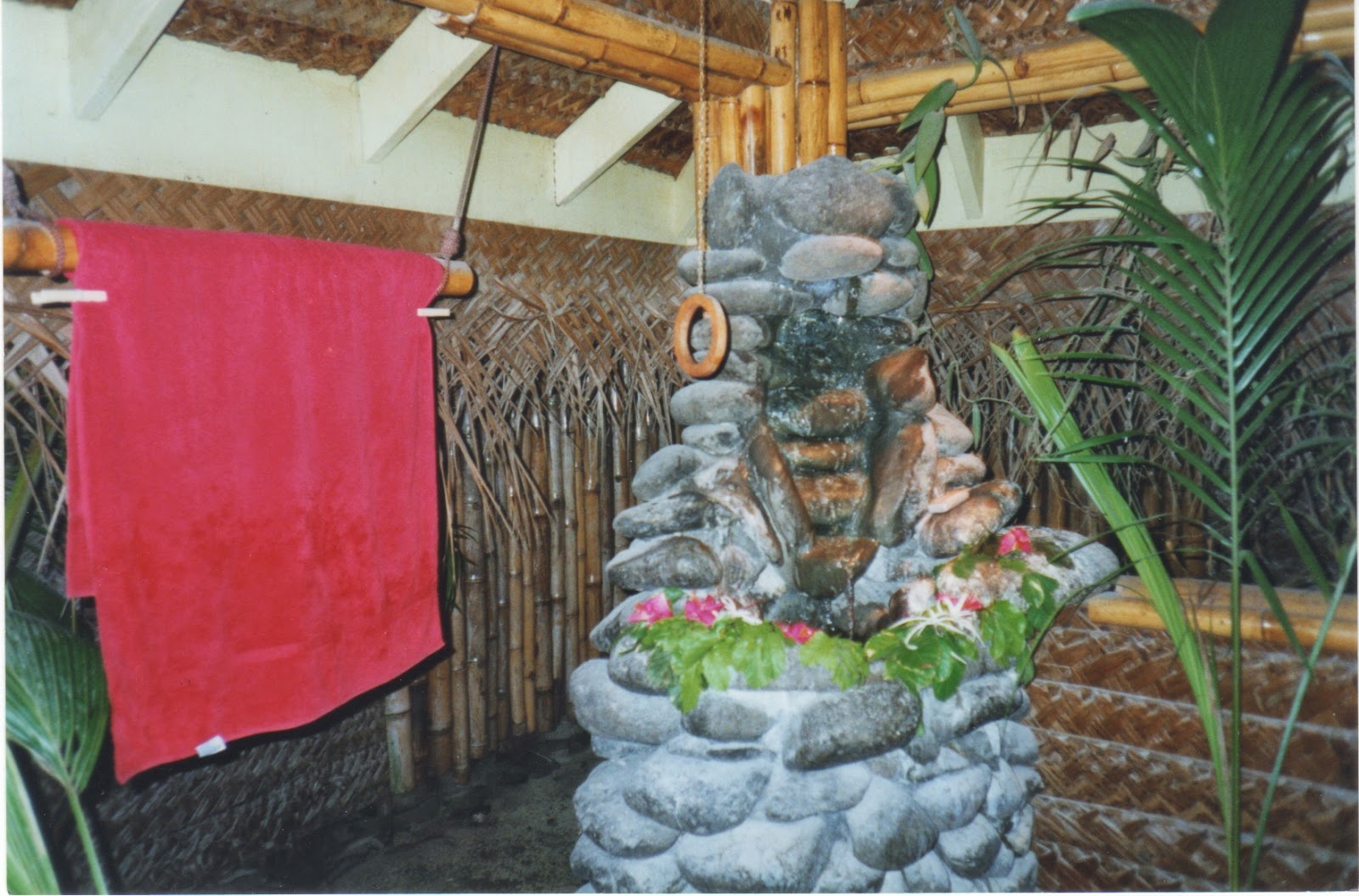 We also attended church there.  All the women wore hats and the men wore flip-flops and leisure suits.  Each village sat together and each sang a few songs for the worship time.  The cruisers had a separate section on one side of the sanctuary.  The pastor preached in 3 languages.  After about an hour we decided to slip out and get something to eat.  When we walked past the church 3 hours later, we again heard singing -- they were still going strong. 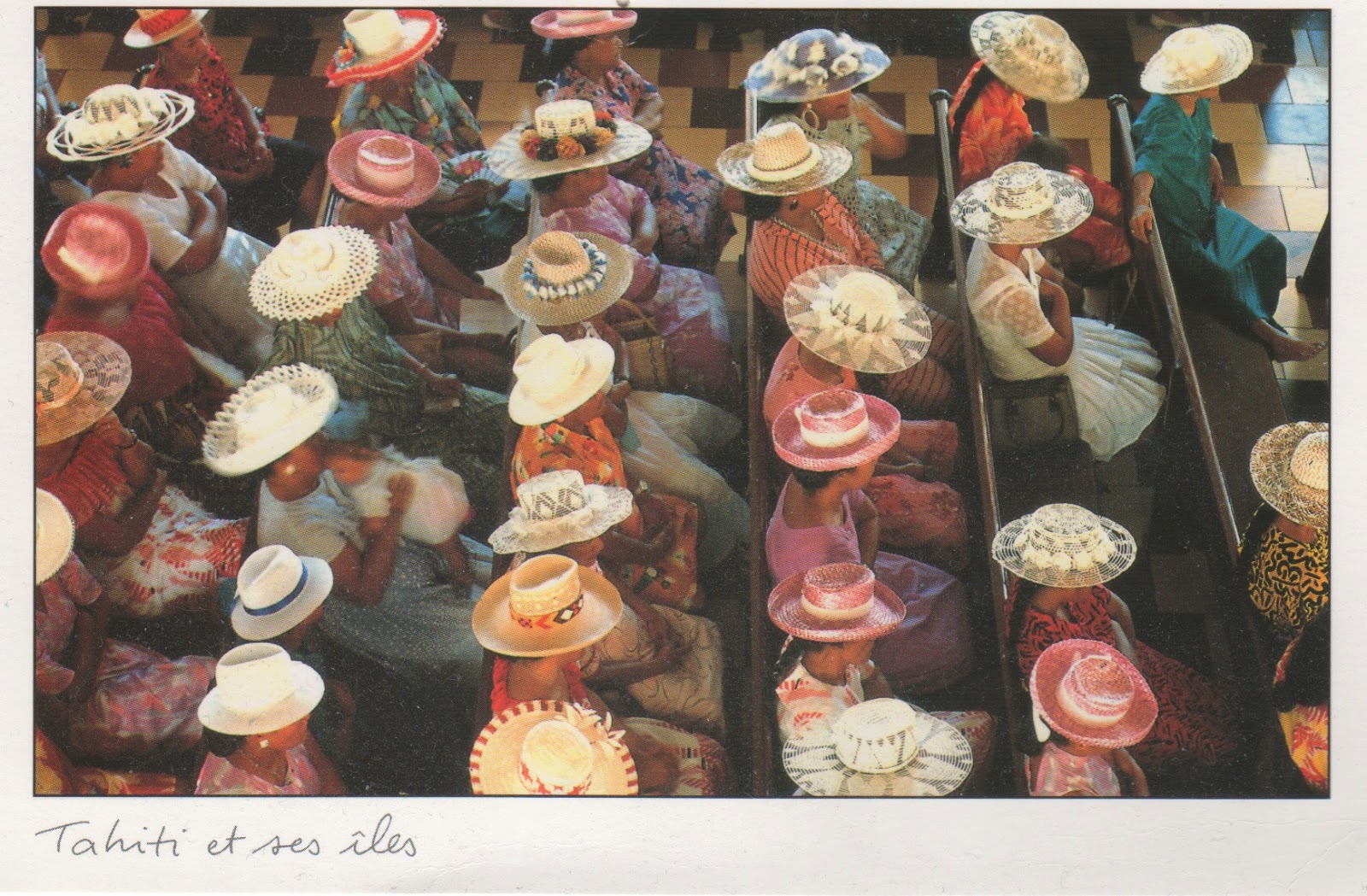 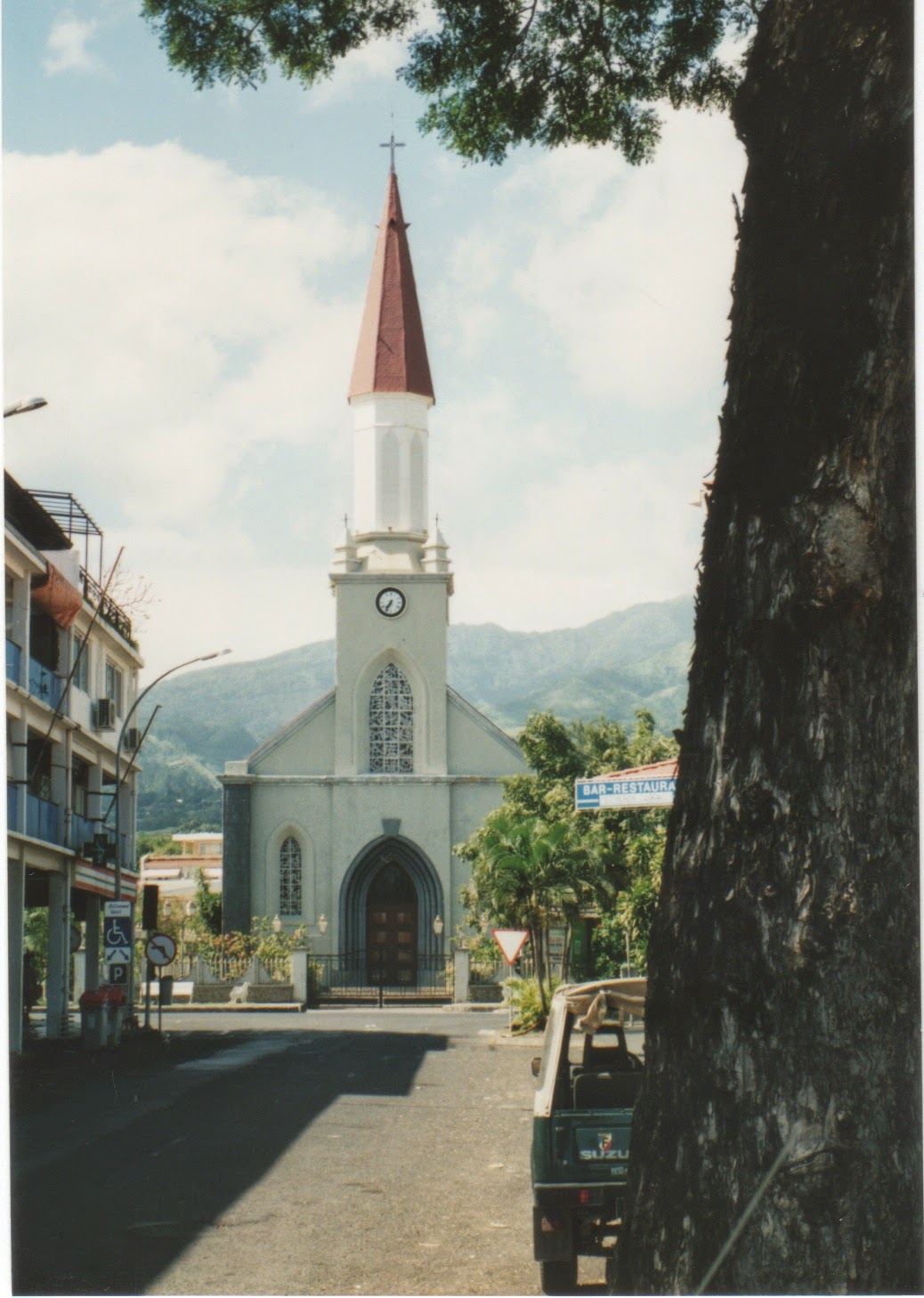 I think this is in Papeete 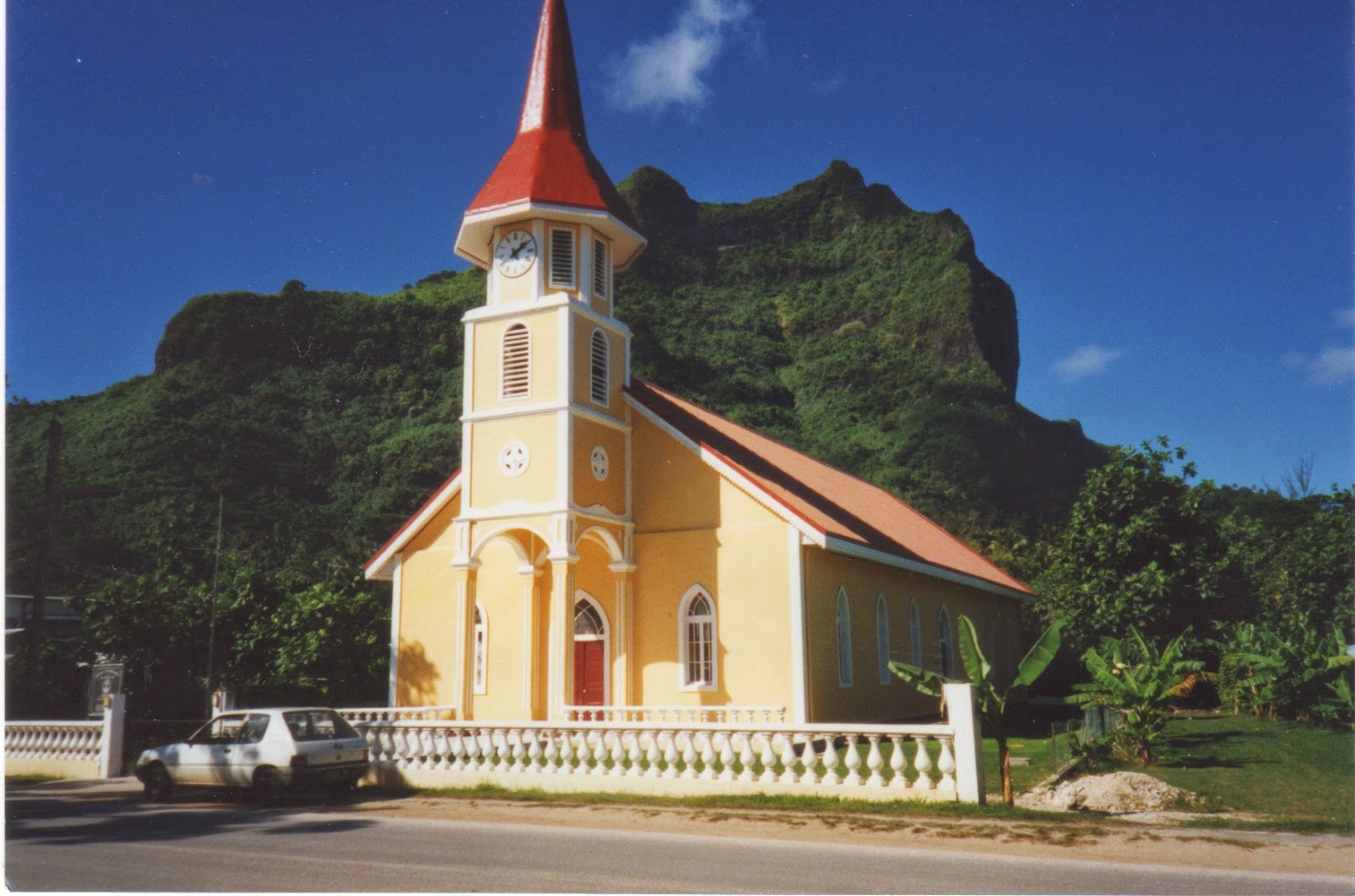 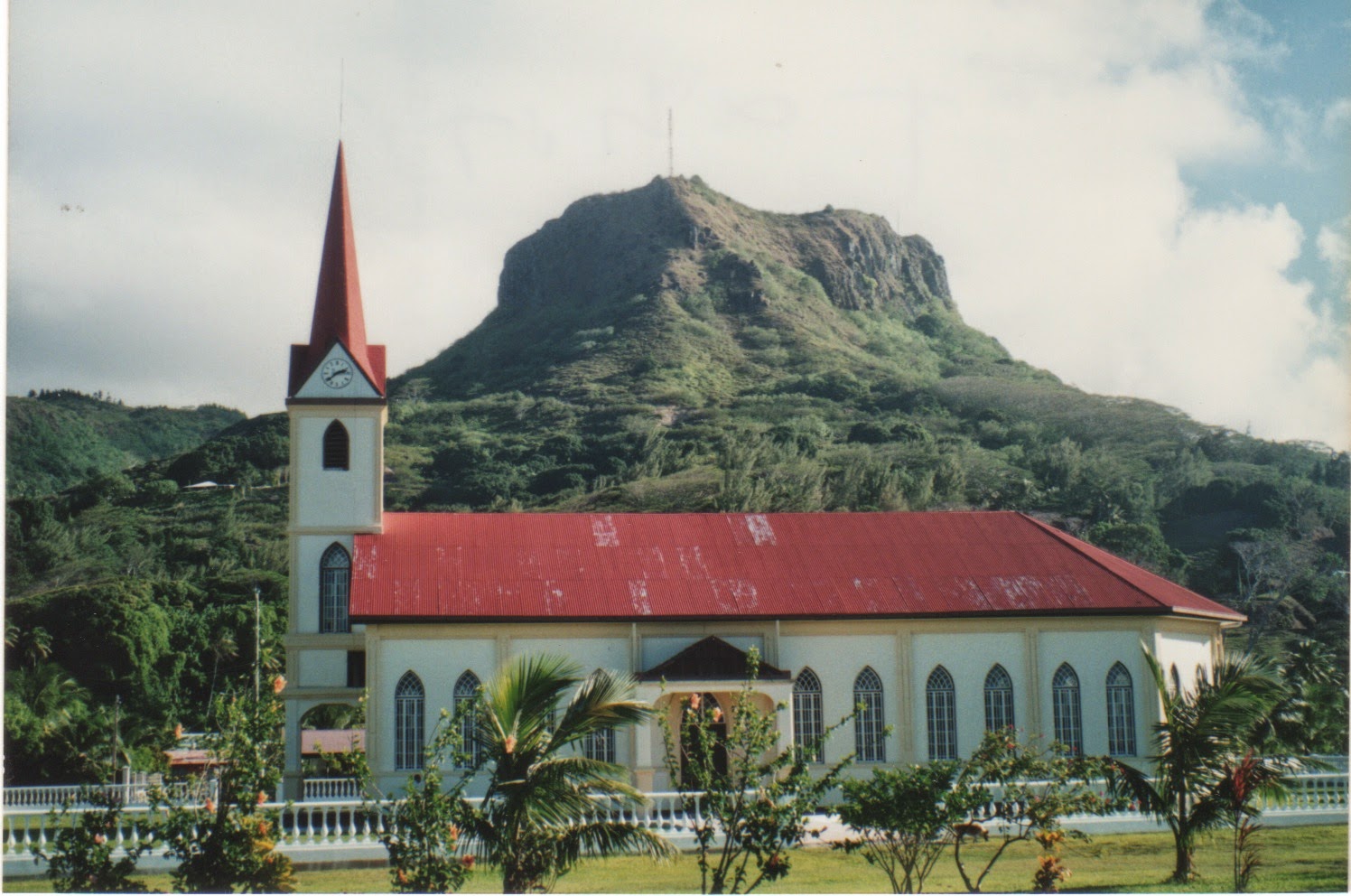 I think this is the church we attended

When it was time to sail back to Papeette Chris arranged for me to stay in the Bora Bora Hotel and then fly back while he and Rex sailed the boat back. 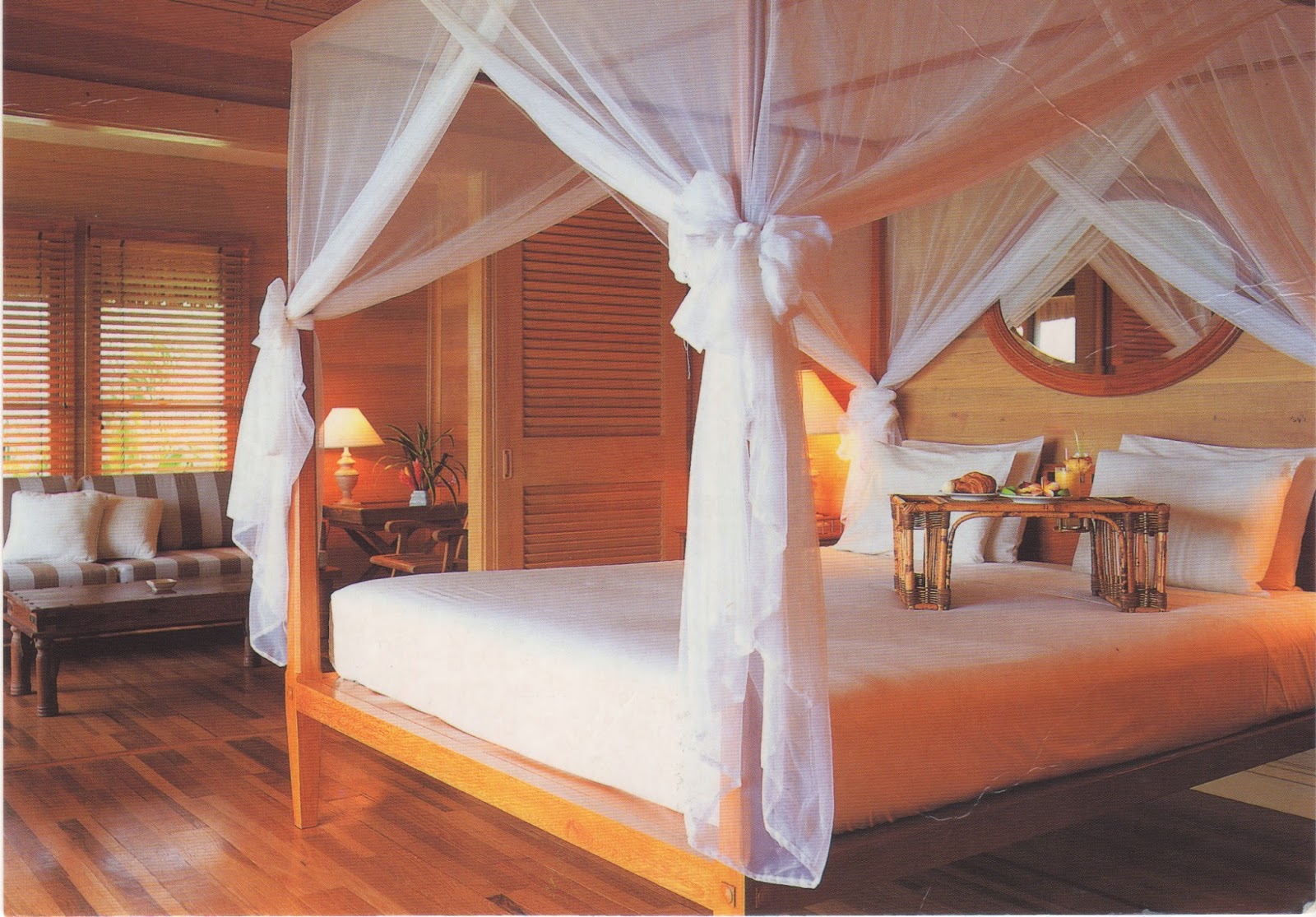 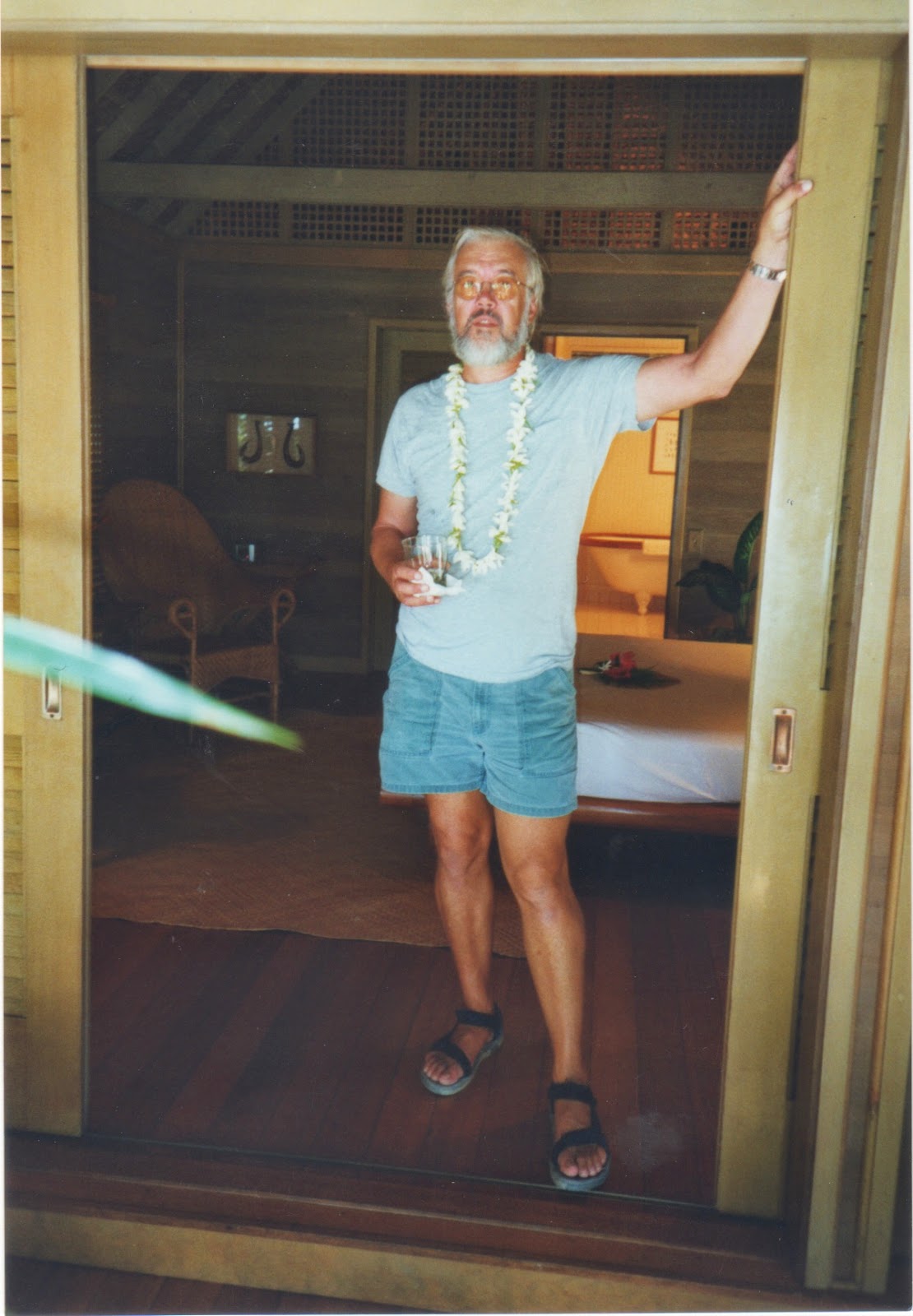 Chris spent the first night with me in the hotel but the second night I spent alone as the plane only flew occasionally.  That night I heard a terrible scream!  It had to be a gecko, I figured.  I had never heard one scream.  I must have scared him, but he scared me worse!  I figured he wouldn’t come anywhere near me so finally I was able to get some sleep. 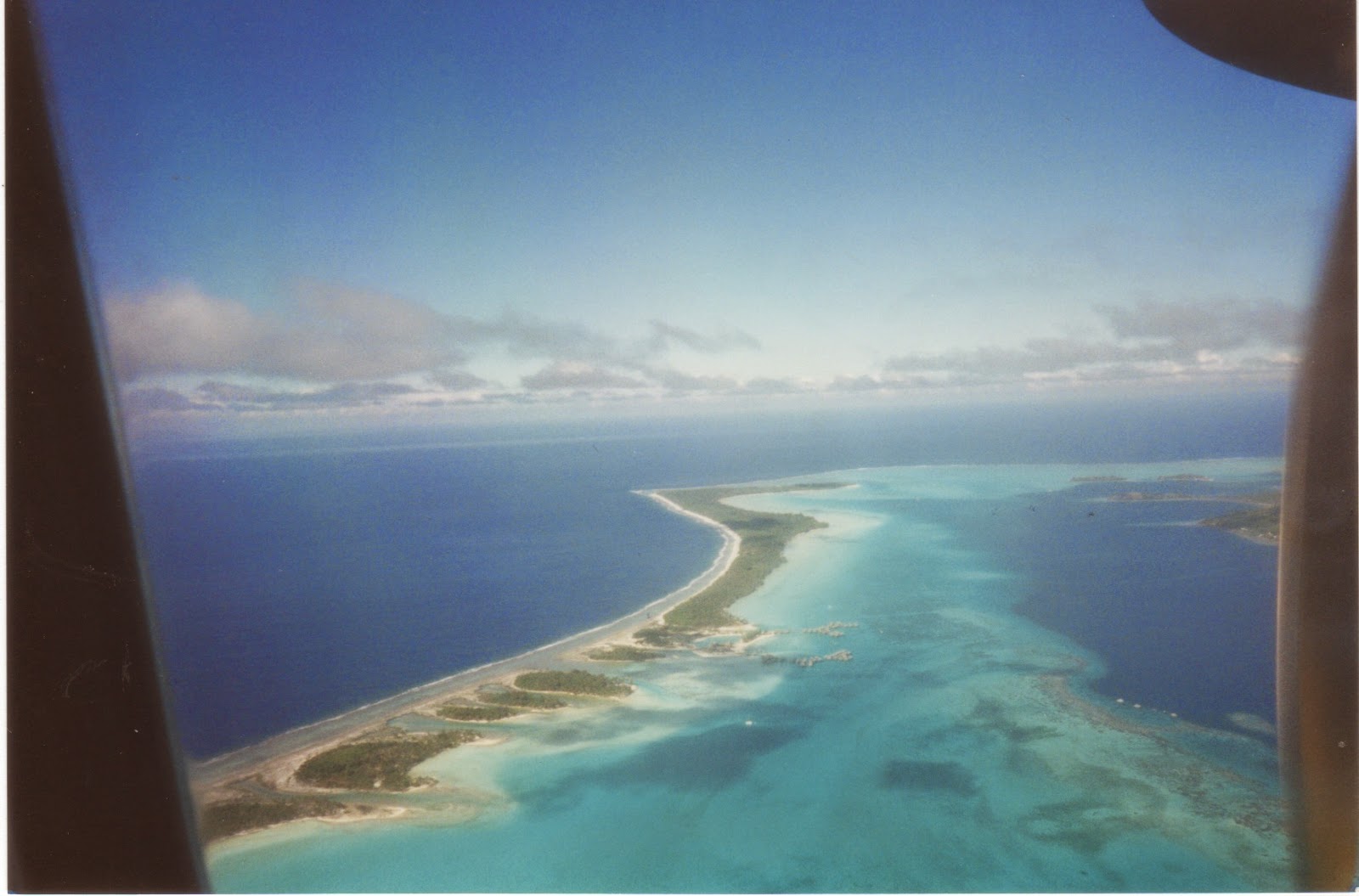 I took this from the airplane window

I encouraged Chris to keep going to Australia or wherever he wanted to go.  Rex agreed to crew for him. But instead we decided to ship Flyaway back to the states and buy another house.  (Ugh! Horrors! I hate houses!) Chris had no desire to be a long term sailor.  So at that time our choice was to buy a house.  We sold it 4 years later and bought a condo.  It is easier for me but tougher for Chris.  He is on the condo board.

I’m so grateful to God that He enabled us to have the finances to go on this wonderful adventure.  I'm thankful for a safe journey every step of the way. But now I’m ready to be an armchair sailor.  I will now watch all those travelogues my mom sent me before we went on our adventure.  It was her way of trying to convince us to stay home.  So now we will!
Posted by Flyaway at 6:45 PM