Of Whales, Aircraft Carriers, and Storms-- Part One of a Six Part Blog on Our Sailing adventures Flyaway photo taken by another cruiser

As a youngster I was a tomboy.  No dolls or tea parties for me.  I’d rather climb a tree and stand on the roof than play with “girl’s things.” I would say that I’m a conservative non-conformist.

When I met Chris in college and found out that he was not interested in living in a house, but interested in living on a boat, I was intrigued.  Even though I dated a lot, got involved with college activities, and even joined a sorority, I was not interested in marriage, or a home like other women.  Our sorority held a fundraiser one time, by auctioning off the sorority members to become “slaves.” A group of college boys who were roommates bought me.  They had me clean their apartment for them. They told me that someday I would be a housewife and clean house.  “No way,” I told them, “Chris and I are going to live on a boat!”  Well, we did live on a boat but not according to my timing. (Fortunately or unfortunately, it depends on how you look at it, I became a housewife.)

So after Chris and I got married, and bought our first house, (Ugh! A House! Horrors!) We started working on our dream of living on a boat.  We joined the U.S. Power Squadrons and Chris completed all of the courses offered--- basic boating, seamanship, piloting, advanced piloting, marine electronics, engine repair, celestial navigation, and more.  We took Mahina offshore cruising, Starpath weather, and Sea Medicine also.  I completed basic boating, and seamanship, beside the Mahina Offshore Cruising, Starpath weather, and Sea Medicine.  We thought we were ready to sail out into the wild blue Pacific Ocean on our maiden voyage.  We had sailed on lakes, in the Puget Sound, and through the San Juan Islands.   Our plan was simple—install a water maker, weather fax, ham, VHF, and single side band radios, satellite e-mail, wind generator, towing generator, batteries, five anchors with chain, dinghies, radar, computer software for plotting a course, fill the water tanks, fill the fuel tank, stow the food, clothes, and bedding, and more stuff.  Then after thirty-two years of marriage, six houses, thirty some cars, six pets, six boats, two kids, and we were ready to go. 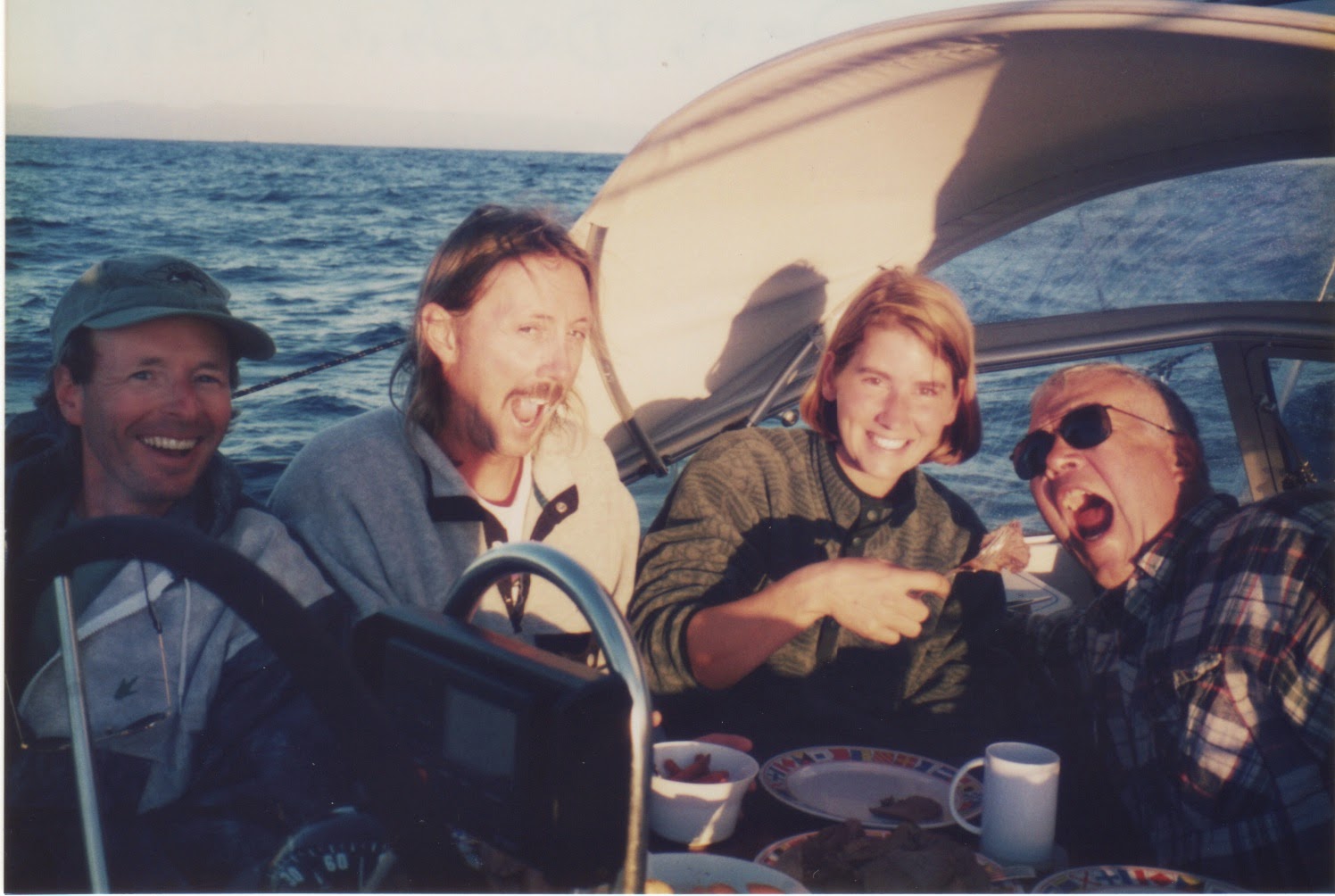 Our our crew--Karl, Dan, Debbie, with Chris

Yep! Thirty-two year later we decided to get off the dock.   It was the middle of September in 1997 when we sailed from Elliot Bay in Seattle and headed toward the Pacific Ocean on our sailboat "Flyaway".  We took a left turn and headed south with five of us on board.  The sun was brilliant in the clear blue sky the wind gently puffing the sails.  We settled down to our different tasks on the boat.  Chris and Dan were rebuilding the water maker, Karl was cooking, Debbie was fishing, and I reading. Suddenly a huge rubber covered brick wall hit our boat!  Whappppppp!   What was that?  Dan thought a whale had hit us.  I went below and got my life jacket. 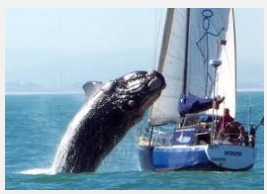 It would have been possible for us to quickly sink after a hit like that, but our 40’ Halberg Rassi sailboat was built like a tank, so no damage was done.  As day became evening we looked for the “green flash” as the sun set.  During our passage to our first port, Crescent City, California, we avoided ship traffic cruising between 7 and 25 knots depending on if we were running the engine—7 knots, or sailing sometimes up to 25 knots with two storms heading our way and flying the main sail wing and wing with the 130 genoa sail.  Karl pretended he was water skiing when our speed increased under sail.

During the midnight watch Karl called to Chris, “There’s a city out here.  Have we gone off course?”  Turns out it was a Navy Aircraft Carrier. Chris had noticed earlier that the Navy planes had been landing and taking off from the Abraham Lincoln. Next blog will be about the hurricane.