A Near Life Experience--Part Four Of Our Cruising Adventures 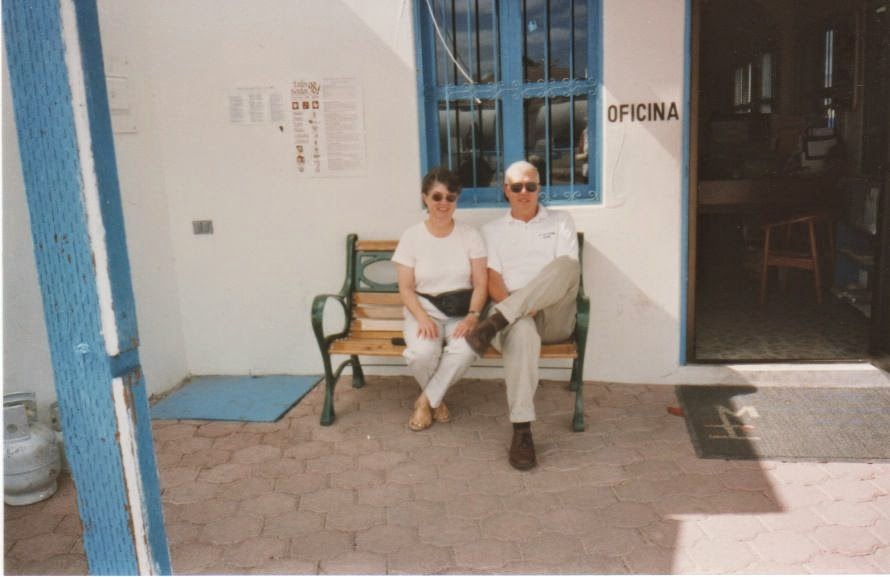 Us at the marina office

Living in Mexico is like living in an alternate universe.  I don’t speak Spanish or understand their strict visa laws.  When we first entered Mexico we had to find a little off ice for immigration to check into the country.  Then we had to find the payment office to pay our fees.  Then we had to go to the Port Captain and have all our papers stamped.  When we decided to stay in Mexico long term we wanted to “import” our boat.  Two men came out to inspect our boat.  They didn’t speak English so when I offered them a glass of aqua they didn’t know what I said.   But we passed inspection anyway! 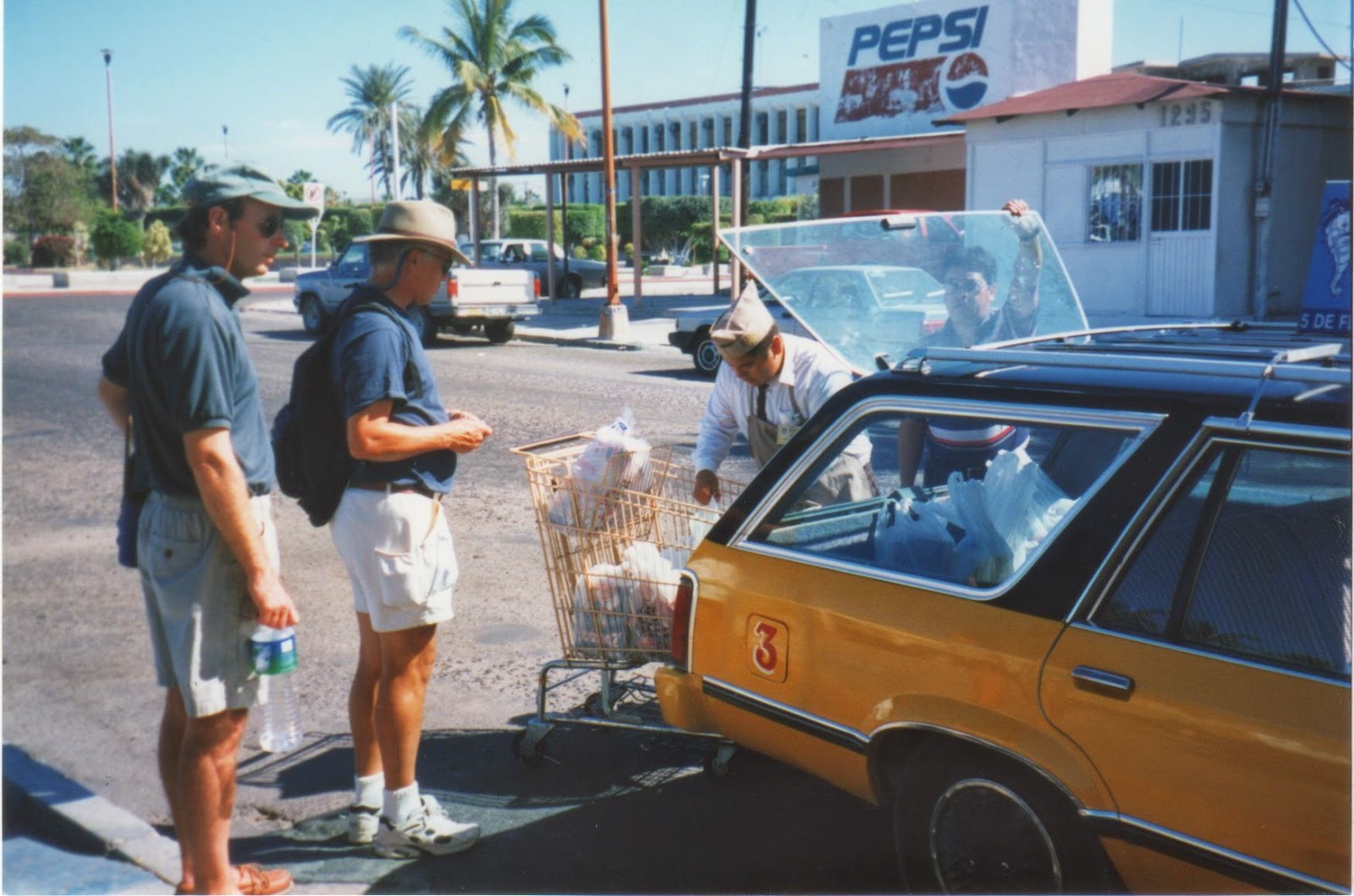 Karl and Chris getting groceries

Grocery shopping was another challenge.  There are about 100 types of peppers, Spam is in the gourmet section, milk is radiated, and of course everything was in Spanish.   To shop we took a cab, rode a bus and got off when it turned away from where we wanted to go, or bought fruit from the produce man who came to the marina. 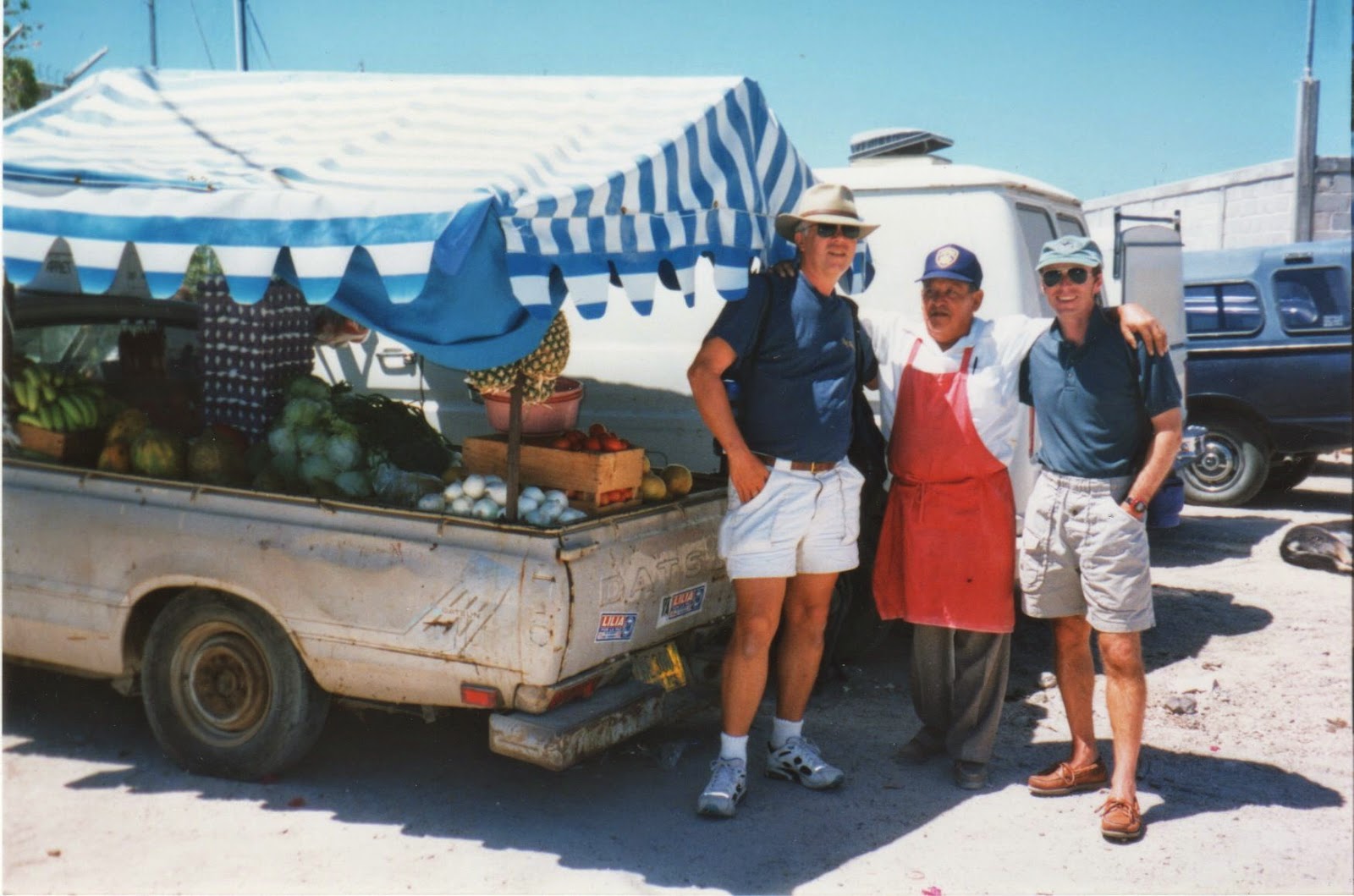 Karl and Chris with produce man

Communication was another stimulating test of abilities.  If we mailed a letter it would take weeks to get to the U.S. E-mail was by ham radio or satellite. We didn’t have an address so the only news we got from the States was when one of our friends would bring mail down with them.  Our daughter sent us an Easter basket down to us by way of our son one year.  Phone booths were everywhere but calls were expensive.  I felt very isolated, as I had nobody I could identify with.  No Moms in Prayer groups here. (One trip down I brought some booklets in Spanish to pass out to moms.) No churches were available for English speakers. (A TEAM missionary in La Paz, who was planting Spanish churches, would preach his sermon in English to us at 8 am on a Sunday morning before he preached to his congregation.) We immediately signed up for Spanish lessons.  I was able, after a year of living in Mexico, to understand what was being said in Spanish but I still could not answer in Spanish. 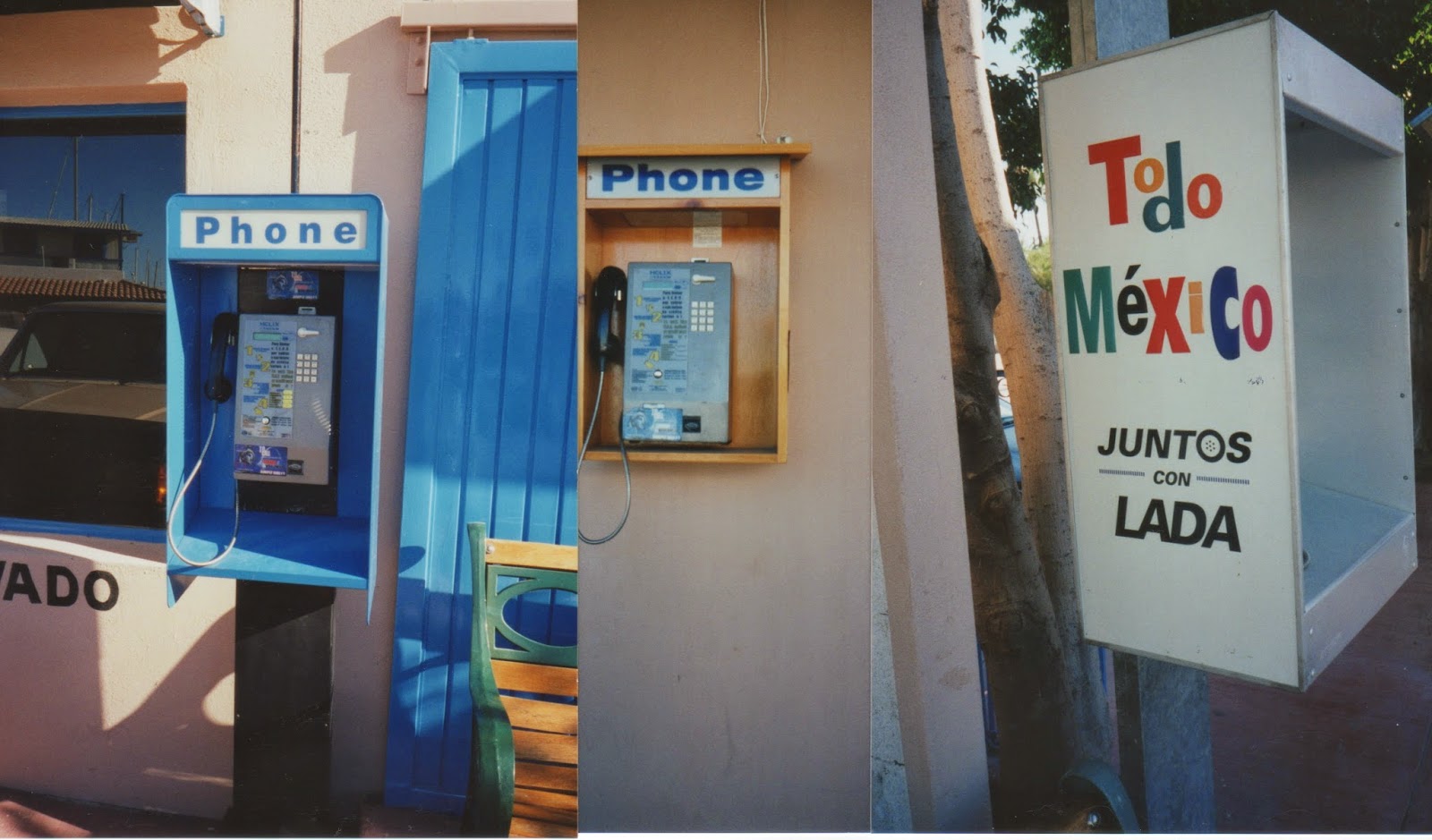 Pictures of phone booths I shot

We used the marina facilities so as not to pollute the water in the marina.  Every day a maid scrubbed the showers for hours.  I had never used such clean showers.  For this I was thankful!  For laundry we bought tokens from the marina office.  The laundry was next to the cruisers library where we took a book and left a book.

When we anchored out instead of in a slip we would take our dingy into shore to eat at the marina restaurant. 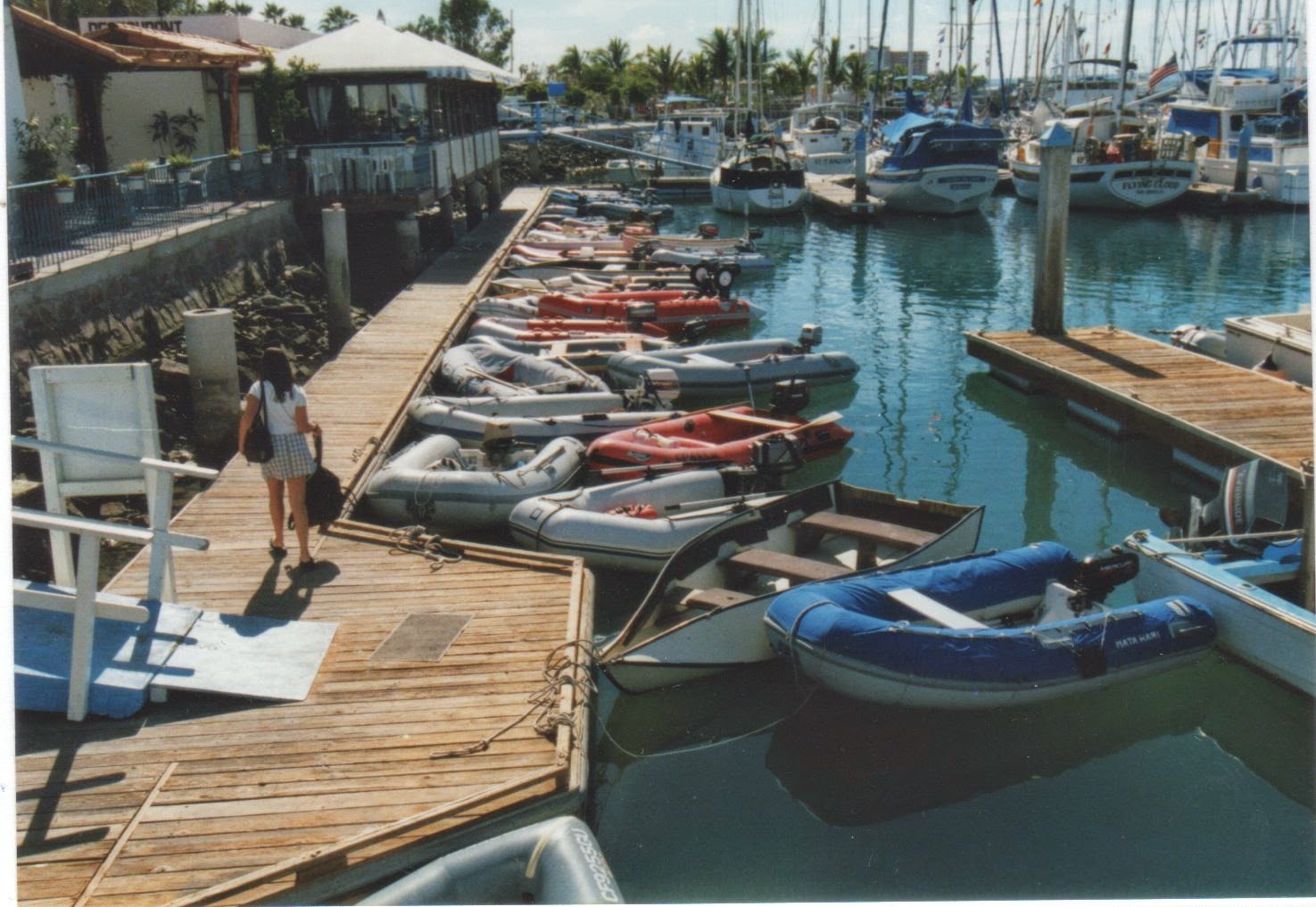 Pictures of dingies I shot

Eating in restaurants was cheap though fattening.  We always ate cooked food though—never mayonnaise or any dressing that required refrigeration. The only time I got sick was when I drank a drink on the street that had fruit in it.  We think it was an allergic reaction as a shot of adrenaline from a hotel doc cured me in about ½ an hour. 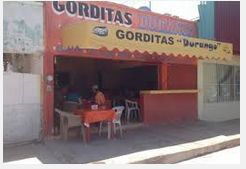 We enjoyed meeting other cruisers and are still in touch with Don and Diann Vis of Lady Diann, and Clavey’s of Touché.  We had “dock” parties.  One time we all got together for an Easter dinner. 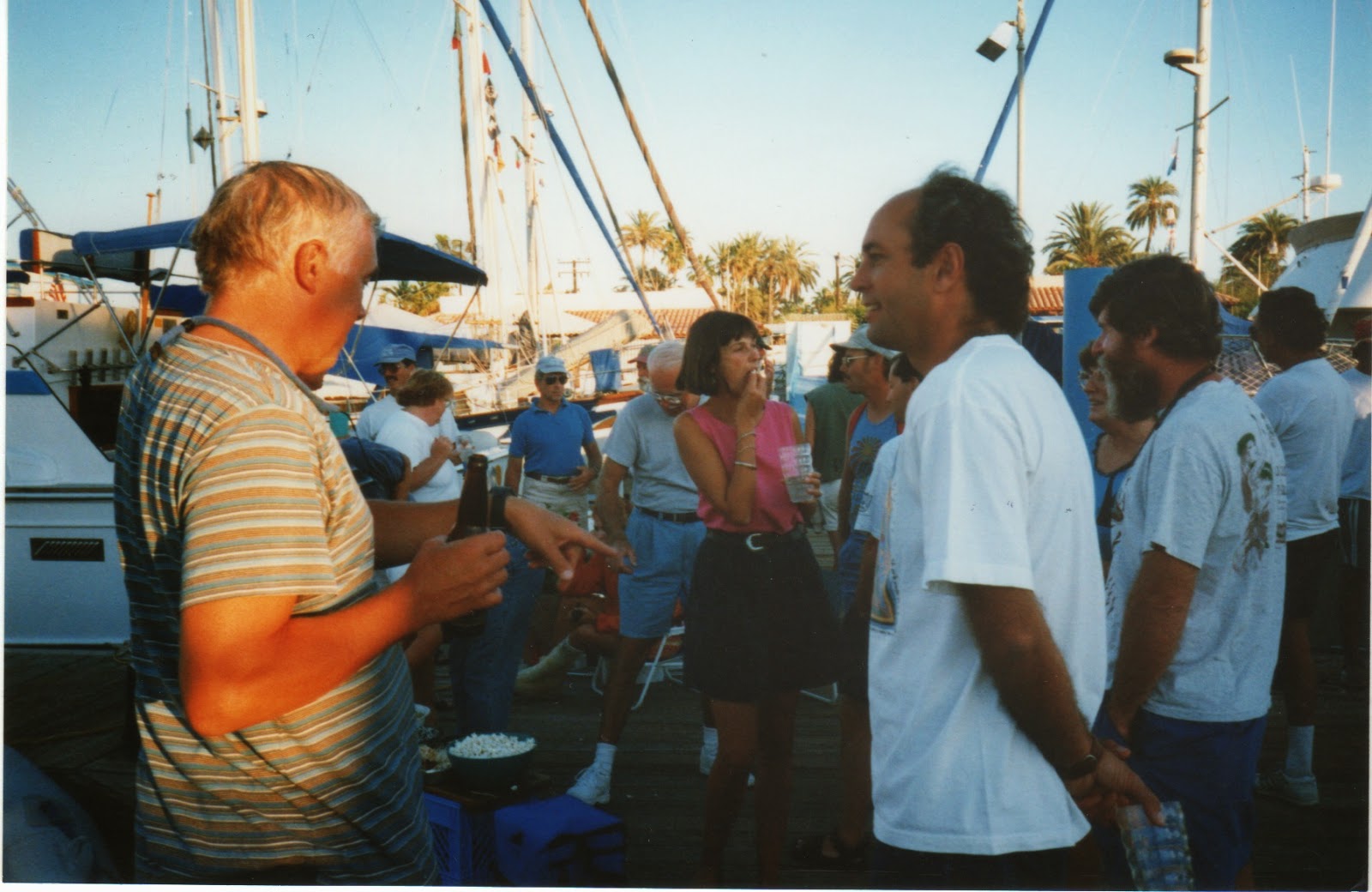 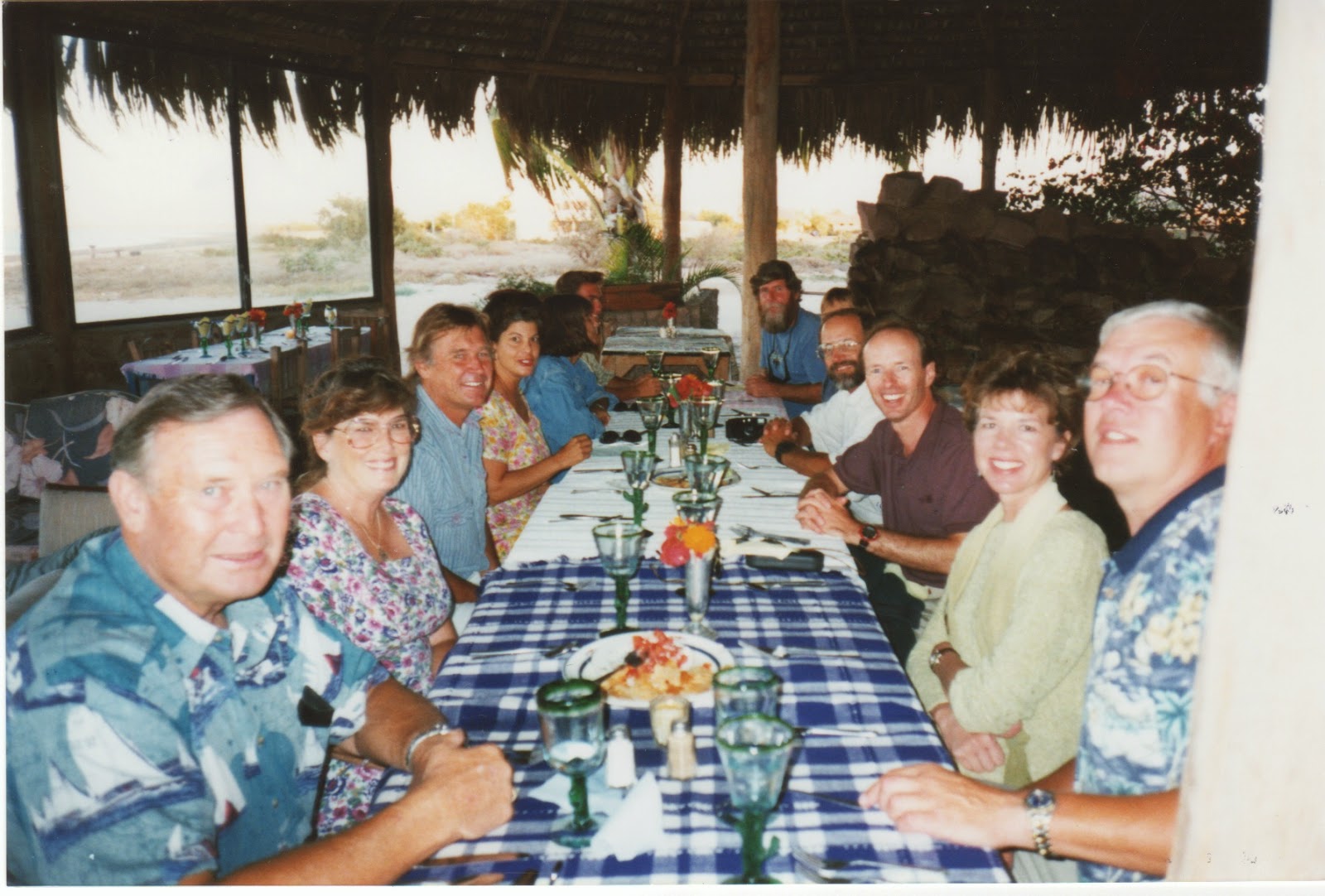 Cruiser friends at Easter dinner.
A few times we cruised out to the islands to have potlucks with other cruisers.  We would see fishermen in their "pangas" out fishing.  Sometimes they would be almost 50 miles off shore with no safety equipment or radios. 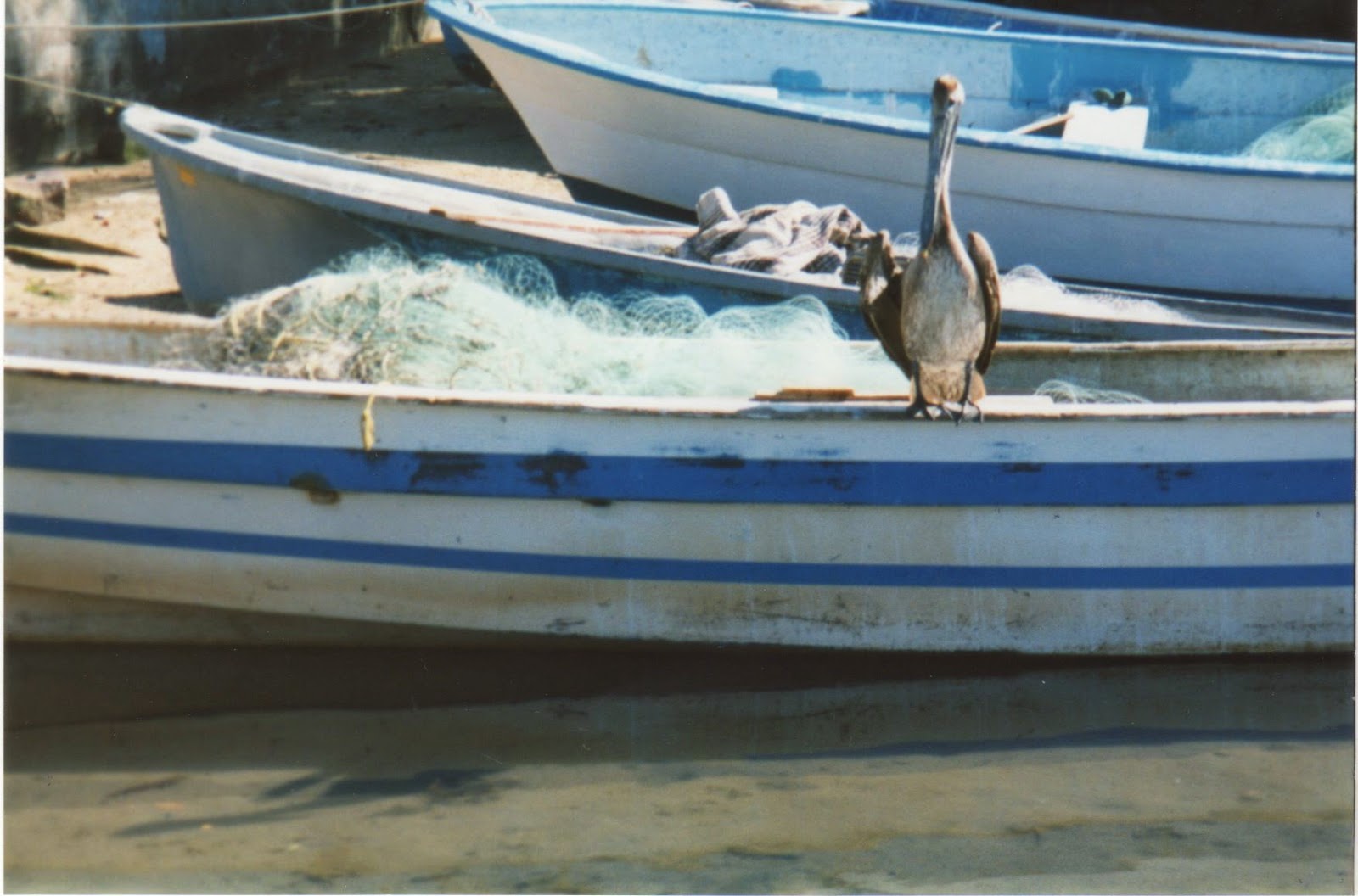 Panga and a small friend 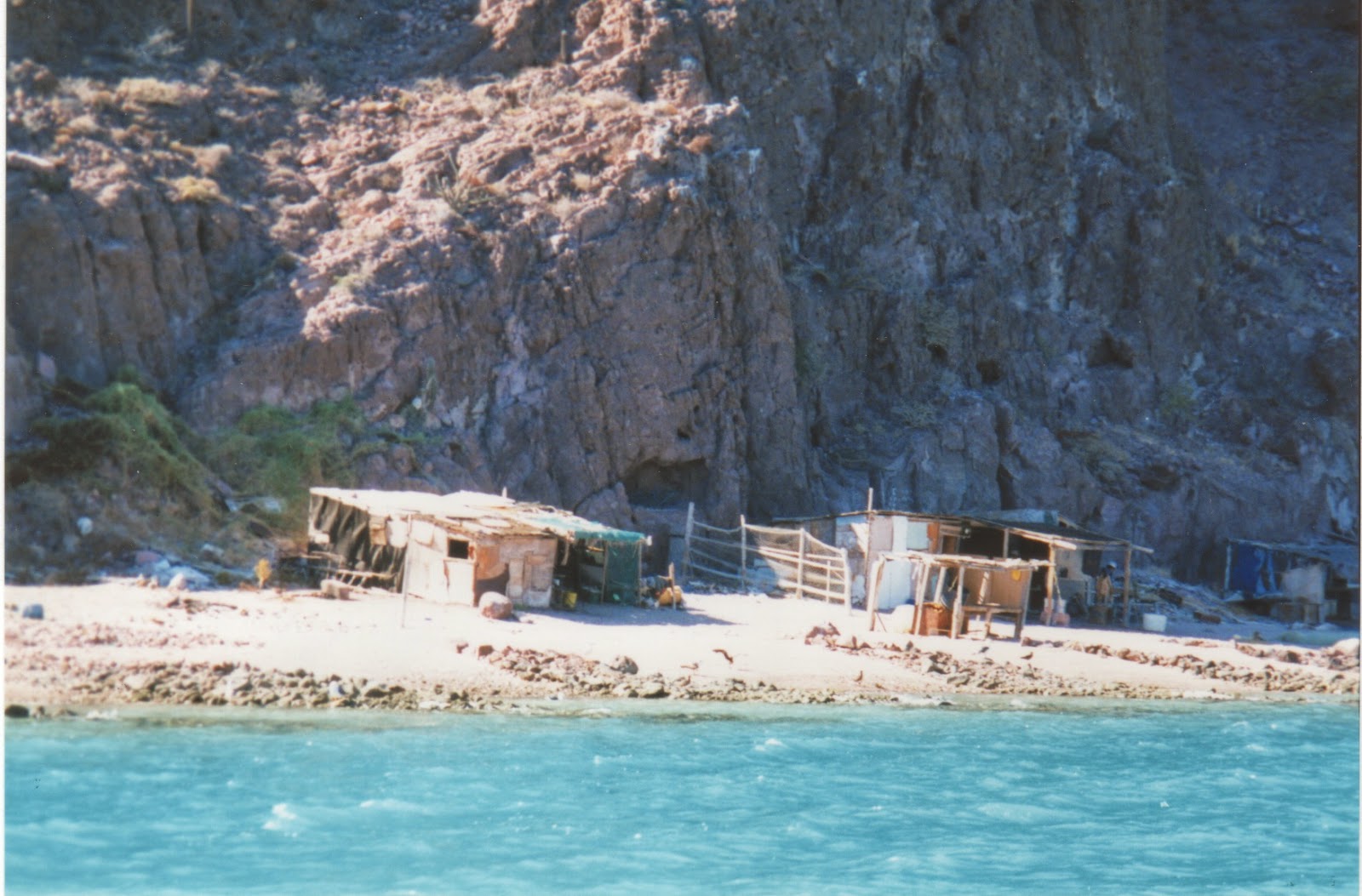 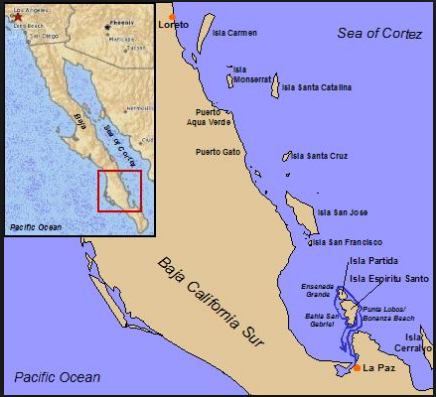 Chart from the internet

As summer set in we had covers built for Flyaway to protect her from the sun.  We chained her to the dock very securely in case of a hurricane. 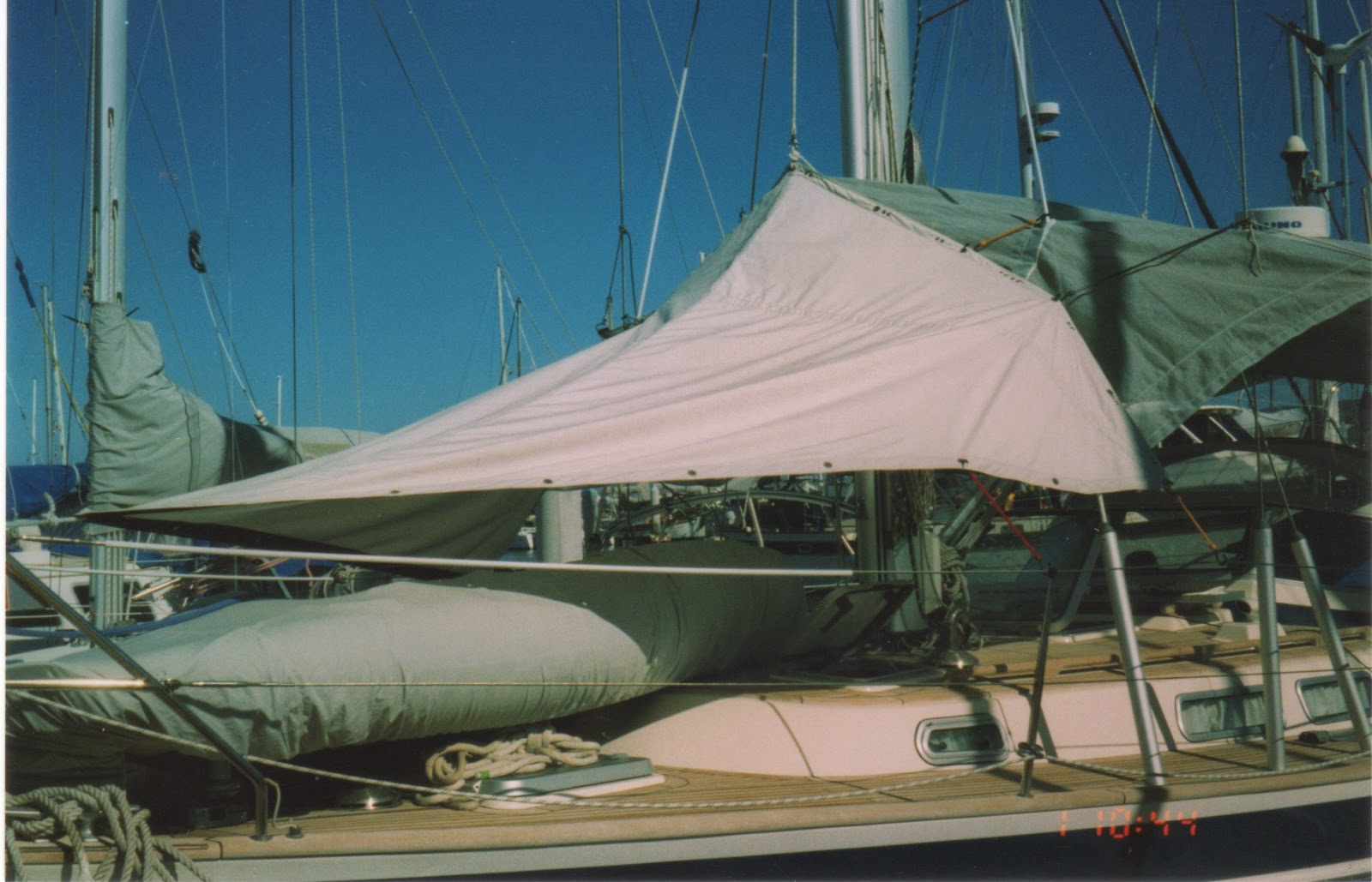 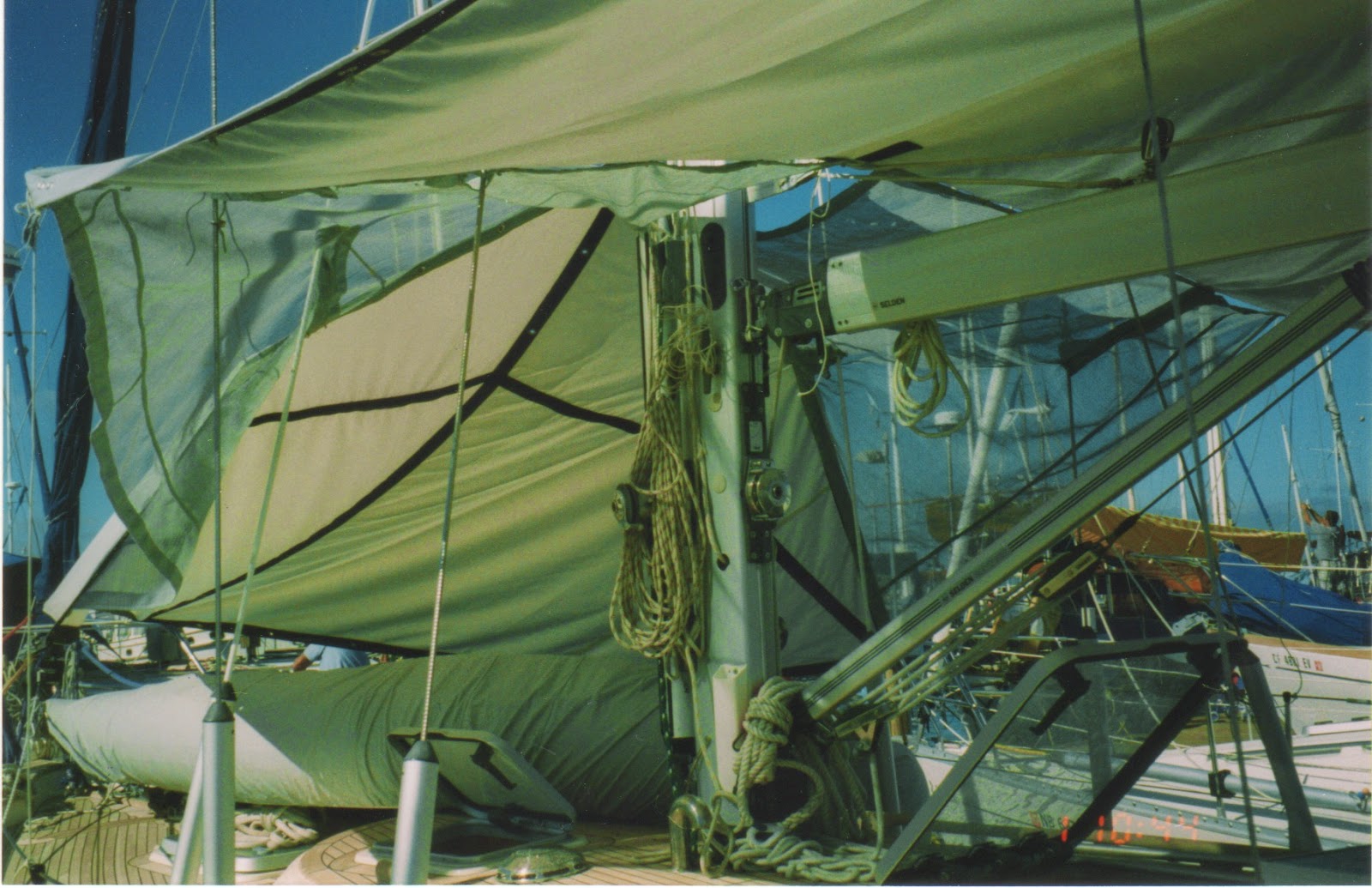 Next blog will be on our crossing the Sea of Cortez to Mazatlan.