Thought this was excellent!  She has my vote.
Posted by Flyaway at 2:08 PM No comments:

How Does Homosexual Marriage Threaten Marriage Between A Man And A Woman?

Chris has been watching the HBO special “Newsroom” on Amazon.  This you tube clip above made me wonder how gay marriage threatens traditional marriage. Click on the arrow to watch this fictional interview of an aide to Rick Santorum during the 2011 presidential race.

I had never thought of this but gay marriage does threaten marriage between a man and a woman.  First of all we need to realize that up to 1/2 of the people in the U.S. don’t think homosexual sex is a sin.  If you asked them about the other sins in Romans 1:29  they would probably agree that the other things are sin.

Romans 1:26 "For this reason God gave them up to dishonorable passions. For their women exchanged natural relations for those that are contrary to nature; 27 and the men likewise gave up natural relations with women and were consumed with passion for one another,men committing shameless acts with men and receiving in themselves the due penalty for their error……29 They were filled with all manner of unrighteousness, evil, covetousness, malice. They are full of envy, murder, strife, deceit, maliciousness. They are gossips, 30 slanderers, haters of God, insolent, haughty, boastful, inventors of evil, disobedient to parents, 31 foolish, faithless, heartless, ruthless. 32 Though they know God's righteous decree that those who practice such things deserve to die, they not only do them but give approval to those who practice them.”

Now what does the sin of homosexual marriage do to a marriage between a man and a woman? How about this from "The Bible’s Teaching on Marriage and Family” By Andreas Kostenberger: "Gender role confusion is a sixth and final result of humanity's rebellion against the Creator. Where God's design for man and woman to be distinct yet complementary partners in procreation and stewardship of God's earth is diluted, people will inexorably be confused about what it means to be masculine or feminine, and the lines between the two sexes made by God will increasingly be blurred.”

The children will be taught that we aren’t boys and girls but we are all purple penguins.   See this article:http://www.nationalreview.com/article/389862/school-told-call-kids-purple-penguins-because-boys-and-girls-not-inclusive.

All in all it is ultimate rebellion against God no matter how you look at it. Sin ruins families,  nations, and ultimately the world.  But we know from the end of the story in the  Bible—Jesus will come back and remove the curse.

A Little Taste Of Heaven

I miss my prayer partners.   We recently moved to another town and so I left behind, at our former church, my faithful prayer partners.  We used to meet once a week and pray about everything we could think of from cures for diseases to missionaries.

My other prayer partners were the moms in my Moms in Prayer group.  ( Check out the you tube video above.) We would meet as often as we could to pray for our children and grandchildren in one accord.  If one of us thought of a verse to pray we would pray that verse with her.  If somebody had something to add on the same subject she would add her prayer.

Also, I had a longtime friend who lived across the state from me.  I would call her with emergency prayers –prayers that needed lifting up to God right then.  But she passed away last year.

All these prayers were a comfort to me.  I knew that those of us praying together had each other’s backs.  God cares for us through the concern of other believers.

So I’m lonely for someone who will pray with me.  God made us for fellowship with Him and with other believers. Sometimes God will give us a time of just depending on Jesus and the Holy Spirit to lift up our praises, requests, and confessions to the Father. I love this verse that Joni Eareckson Tada quoted on her podcast yesterday,

Job 16:19 "Even now my witness is in heaven; my advocate is on high. 20 My intercessor is my friend as my eyes pour out tears to God; 21 on behalf of a man he pleads with God as a man pleads for his friend."

I know Jesus is praying for me so I don't NEED new prayer partners but I’m still WANT some.  God will provide in His time.

One reason I know that it is important to have many praying together is from what Paul said.

II Corinthians 1:11  “as you help us by your prayers. Then many will give thanks on our behalf for the gracious favor granted us in answer to the prayers of many.”


If many are praying together then there will be many giving thanks when God answers.  What a thrill to rejoice together.  It’s a little taste of Heaven!
Posted by Flyaway at 11:17 AM No comments:

Somebody Better Do Something 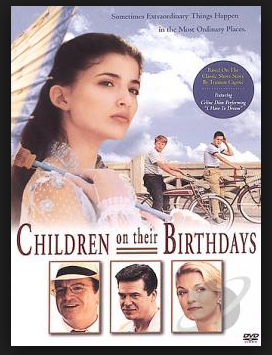 In I Samuel 14:1-23 Jonathan, son of king Saul, decides that he is tired of the Philistines beating up on the Israelites, and that he is going to do something about it.  The story reveals how Jonathan’s armor bearer was right with him in support.  Subsequently, because the Lord was with them, they defeated the Philistines.

On Sunday, our pastor challenged us to do something that we are fearful of for the sake of Christ.  I prayed that God would show me if there is something that I need to do for Him.

So far the scariest thing I have done this week is to attempt to show my granddaughters my favorite movie, “Children On Their Birthdays.”  The movie is set in Alabama, in 1947, just after WW II. The reason I like this movie is because the protagonist decides that something must be done for the sake of Christ.

Here is how it happens—a bully was stopping a young black girl from taking a book and a basket of berries back to her home.  The protagonist steps in and informs the boy that gentlemen are on earth to defend ladies.  The young girl runs off but our hero chases after her to at least give her the book back.  She defends the girl to her father telling him why she lost the berries.

Then later on she brings her new friend to sit with the white people in church when all the black people are sitting in the balcony.

Now to the next frightening thing—my 10-year-old granddaughter challenged me on one theme of the movie.  The protagonist informs the boys that they must do something nice for the person they hurt as restitution for their bad deeds.  This is a Catholic or Islamic teaching.  We can never do enough good to pay for the evil we have done.  That is why Jesus had to die-- to pay for our sins.

I did find this verse – Proverbs 21:14  “A gift given in secret soothes anger, and a bribe concealed in the cloak pacifies great wrath.”

So sometimes we should do something to smooth over an offense.

I cheer on those who will stand up for the oppressed or do a kind deed for someone.  I pray that I will do the same.

P.S.  Well, today I did something scary for me.  I sent an e-mail to my congressman.  Here is what I said:

The Bible is the Word of God.  It is good for instructing us in the way God wants us to go.  God has even written on our hearts what is right and wrong.  So we know in our hearts that God says anyone who has homosexual sex and anyone who approves of such a thing deserves death.    Support Christians who are trying to save the lost by telling the truth in love. We weep for those who will be condemned by God if they don't repent.