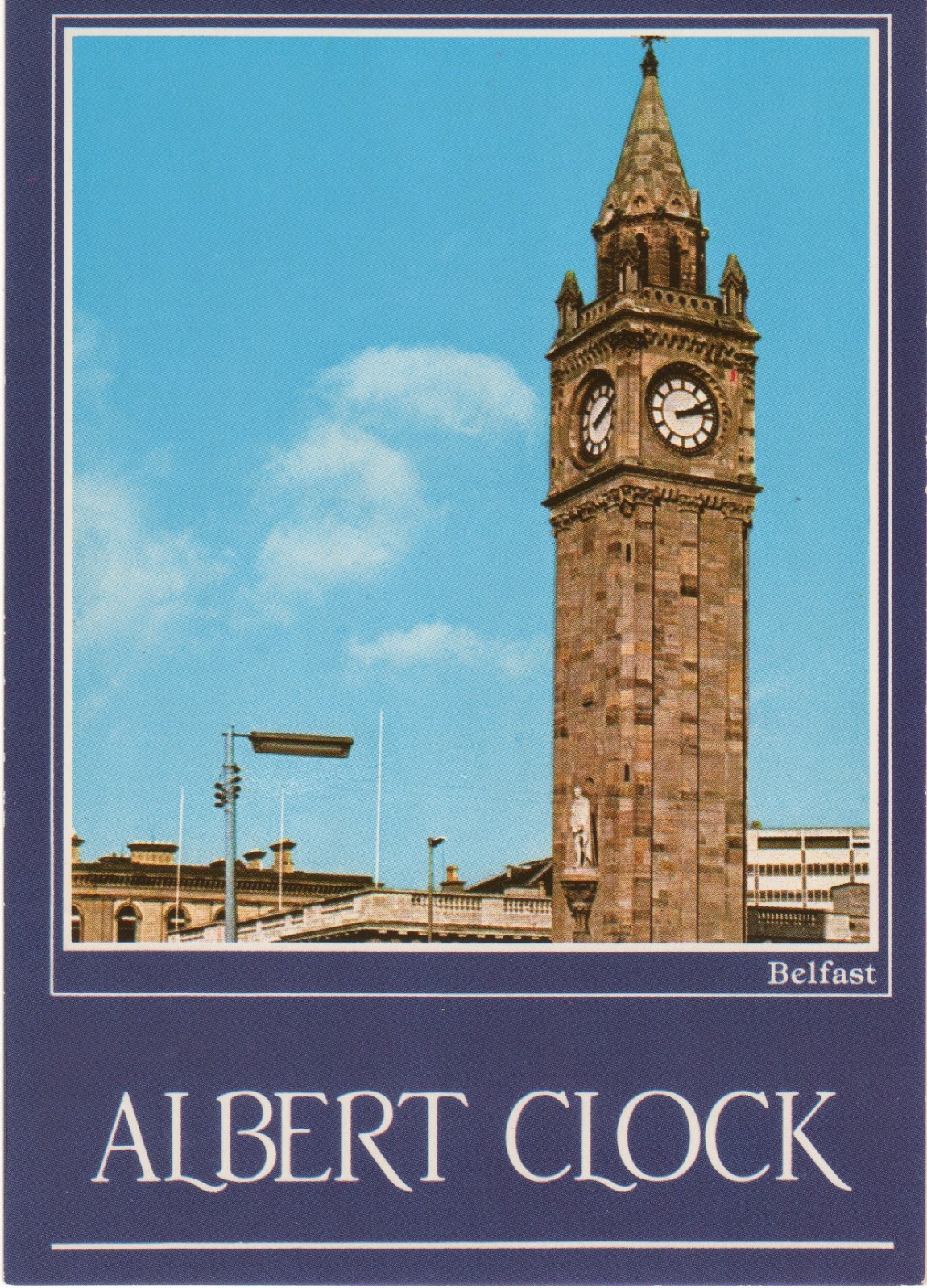 This is the second blog recalling a trip Chris and I took to Europe and the UK in 1992.  Upon arriving at the Dublin airport we secured a taxi to take us to the Shelbourne Hotel. 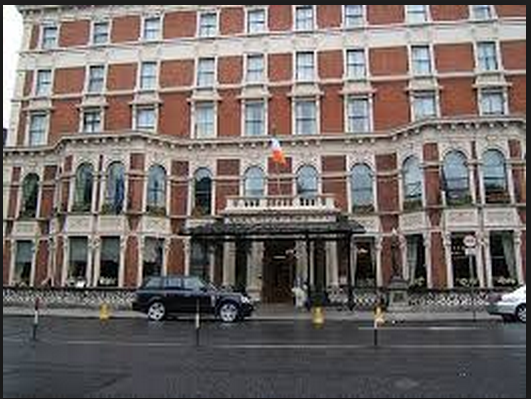 internet photo
On the way there the driver pointed out the remains of a Roman wall.  While Dublin was neutral during WW II, the Germans dropped some bombs on Dublin.  I don’t recall if our chauffeur said that the bombs had damaged the Roman wall further. 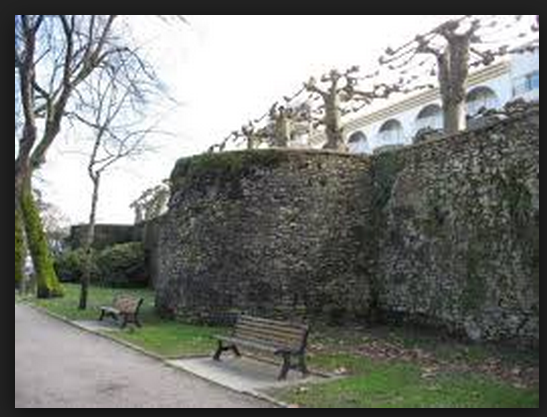 internet photo
The Shelbourne was a lovely classic hotel.  We enjoyed tea in the tearoom while we waited for our room to be readied for us.  Piano music was played expertly for our entertainment. internet photo
I accompanied Chris to the Dublin Microsoft campus.  A sign was displayed welcoming him.  I also noticed a sign asking for aid to Somalia.  Apparently the Dublin office encouraged charity support and made its appeal in the way of a raffle. That evening we enjoyed happy hour with several of the employees.  I asked them about the troubles in Belfast.  They believed that hired thugs were causing the problems. 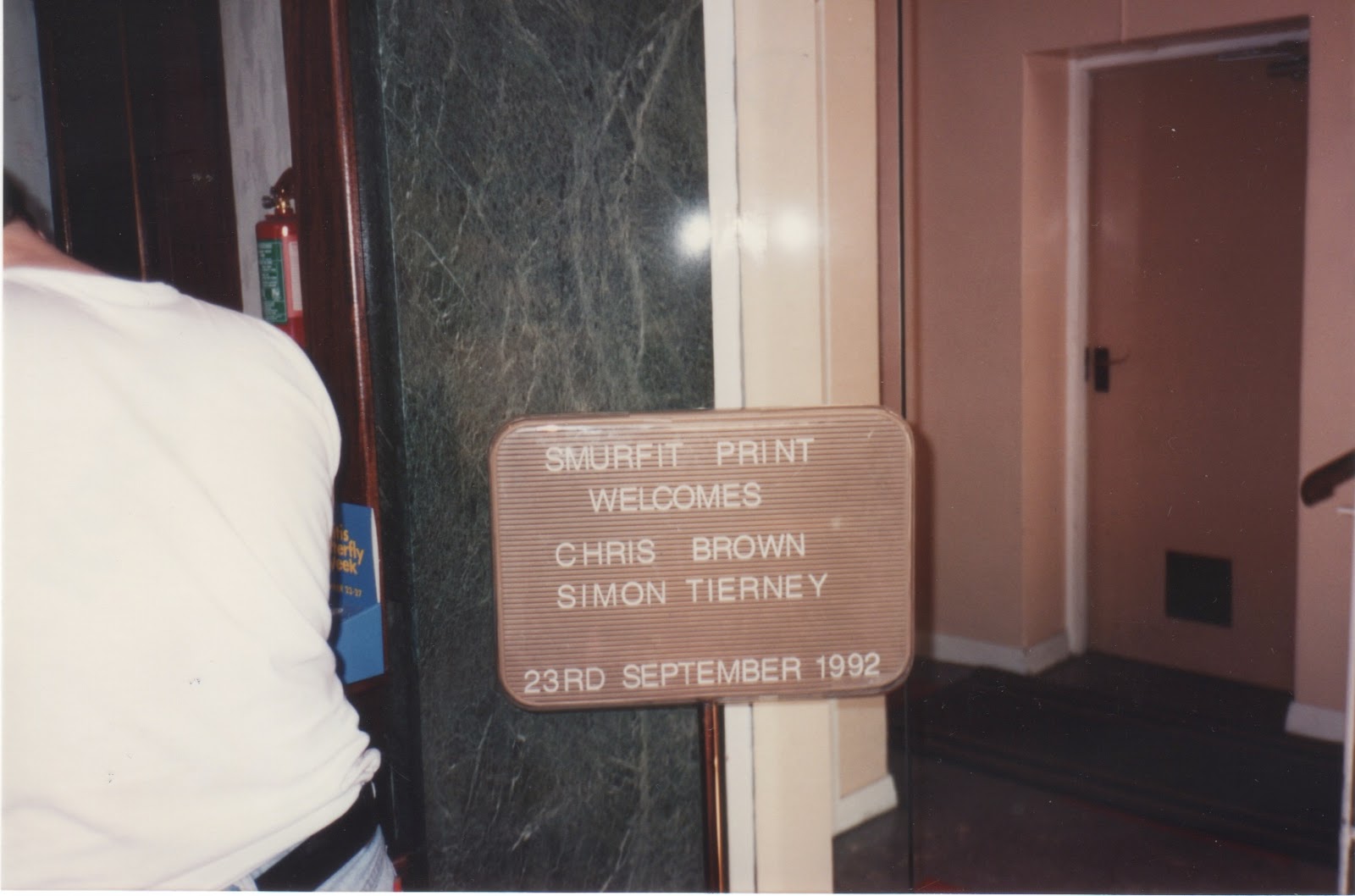 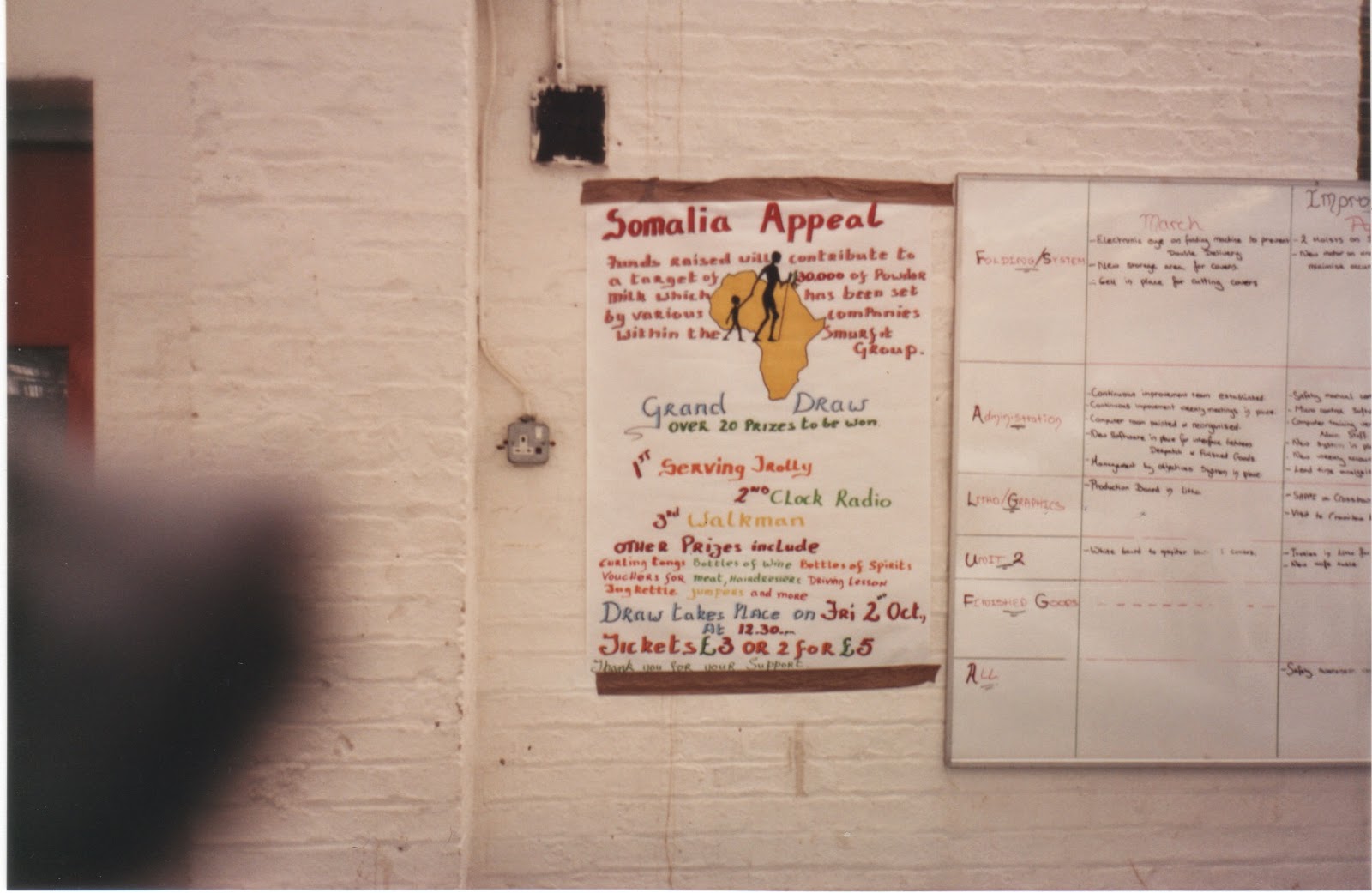 photos by Bobbi
The next day as Chris worked at the plant I toured some areas by bus.  We passed the Trinity College campus. 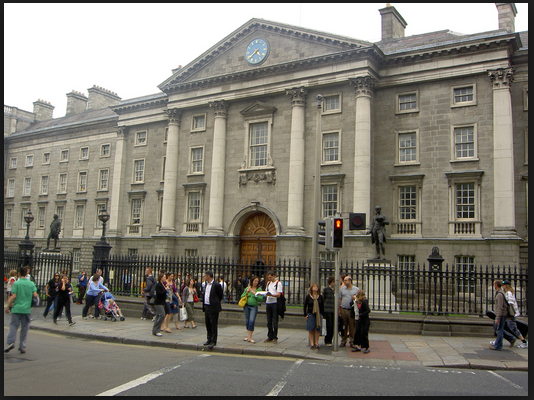 internet photo
If Chris had accepted a position in Dublin, Jes, may have gone to college here.  I noticed that in Dublin there were many beggars and some graffiti.  I was reminded of some cities in the United States. 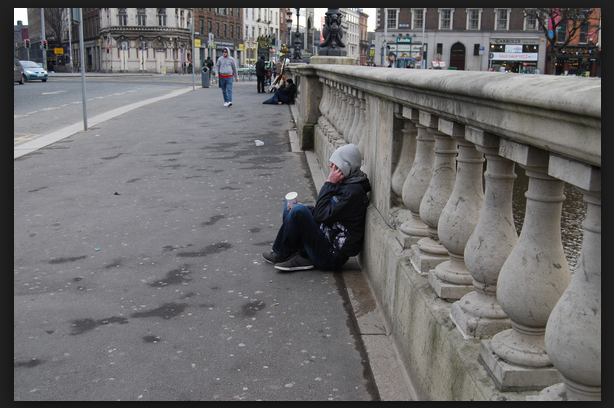 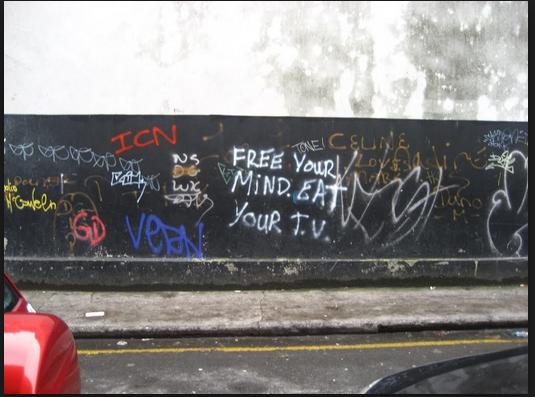 internet photos
The memorial to the potato famine was a grim reminder of the hard times in Ireland. 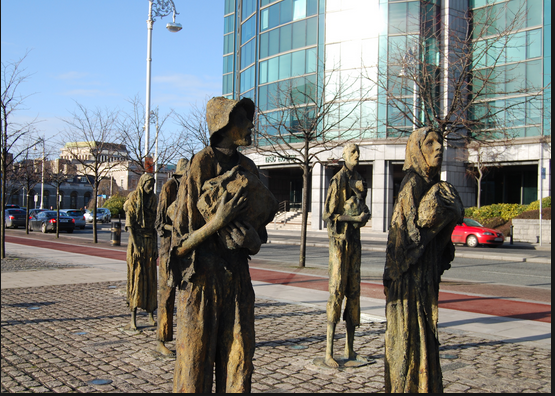 internet photo
We stopped at one castle and viewed very ornate rooms. 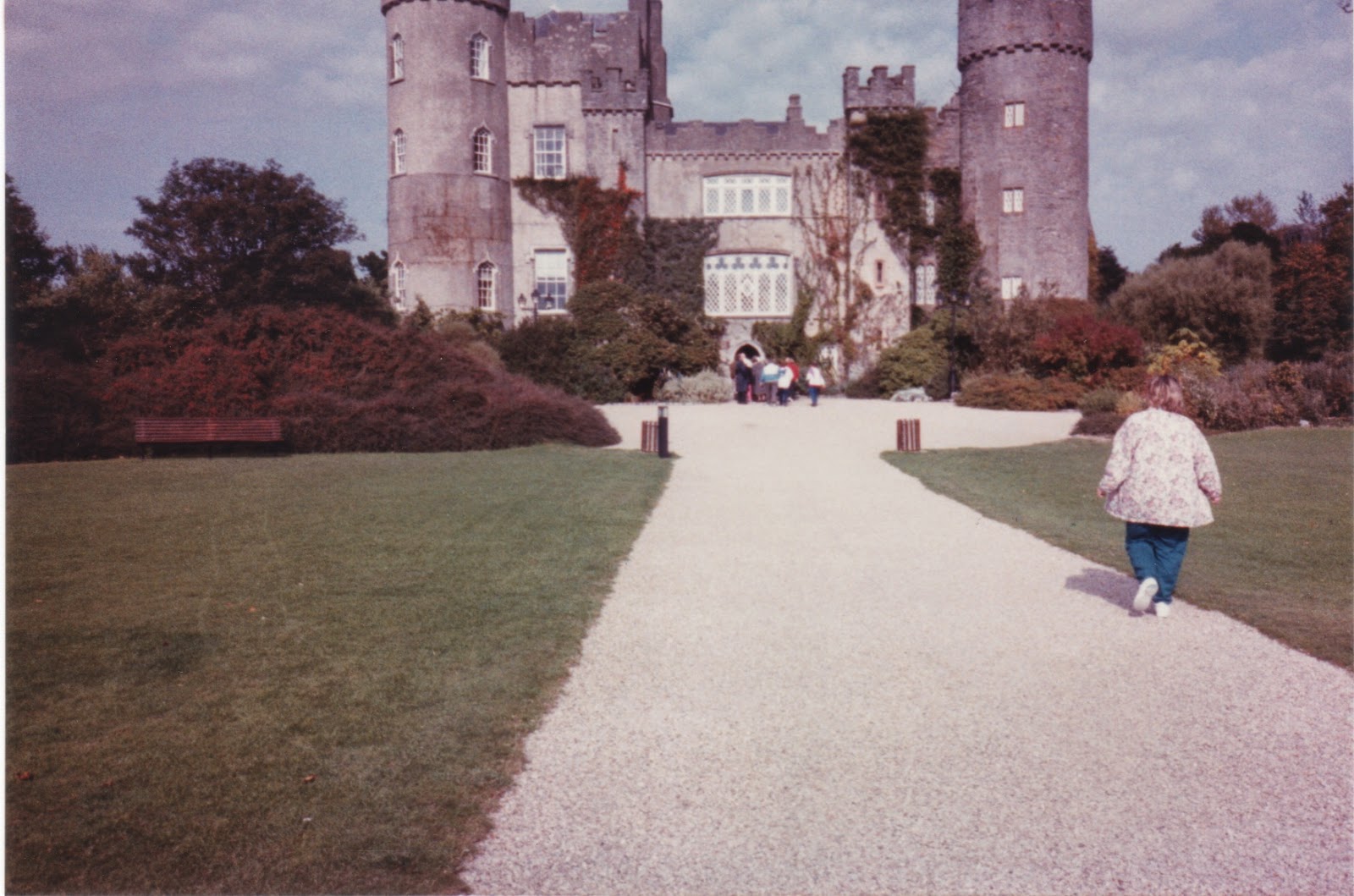 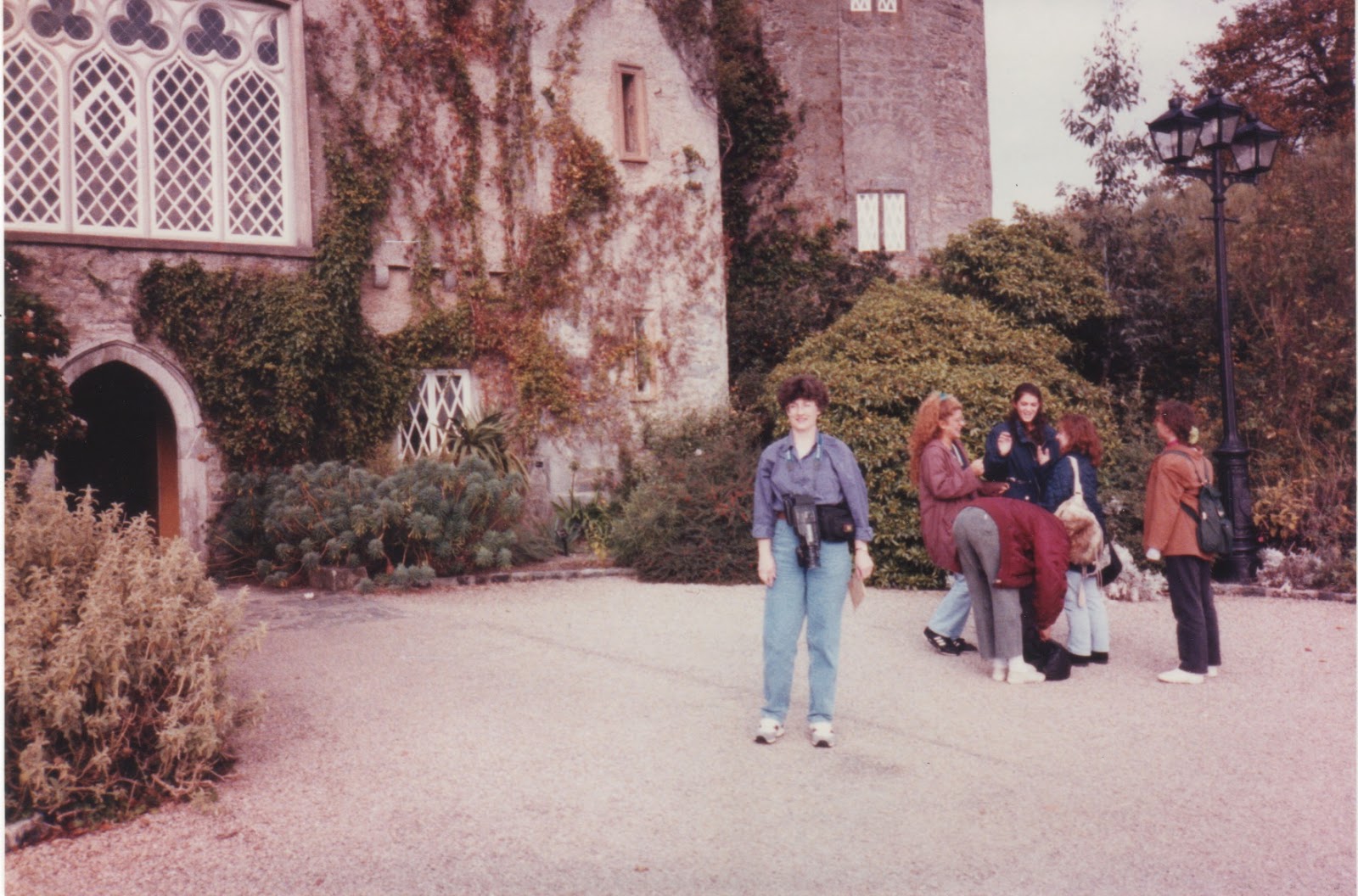 Bobbi
That evening Chris and I enjoyed a meal in a wonderful little cafeteria in Dublin.  It reminded me of the wooden floored café’s in Spokane back in the 50’s. 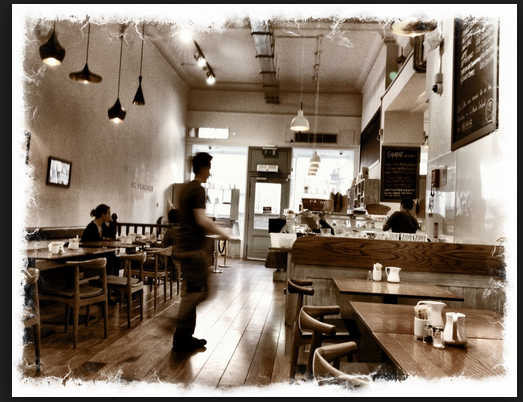 internet photo
The third day, while Chris worked, I took the train to Belfast to visit my dear friend, Nan’s, sister Alice and brother in law, George. 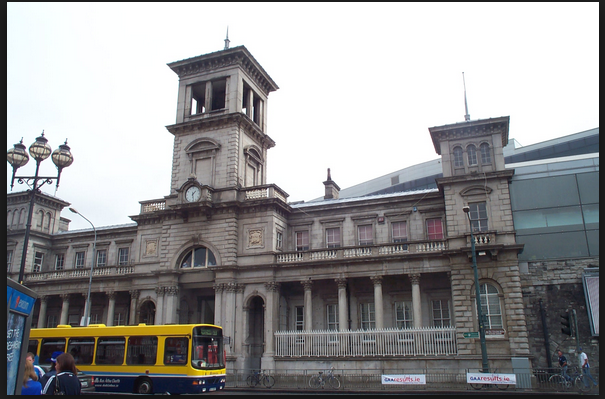 Dublin train station internet photo
George picked me up at the train station.  As we drove down a street in Belfast I was videotaping.  We were stopped by a very polite solider and told it was not a good idea to shoot video.  George showed his I.D. and we were sent on our way. 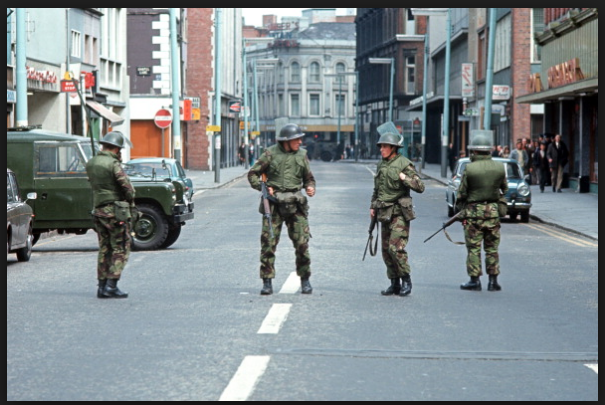 internet photo
Alice treated me to lunch at a nice hotel restaurant.  Then she showed me several viewpoints of the area. 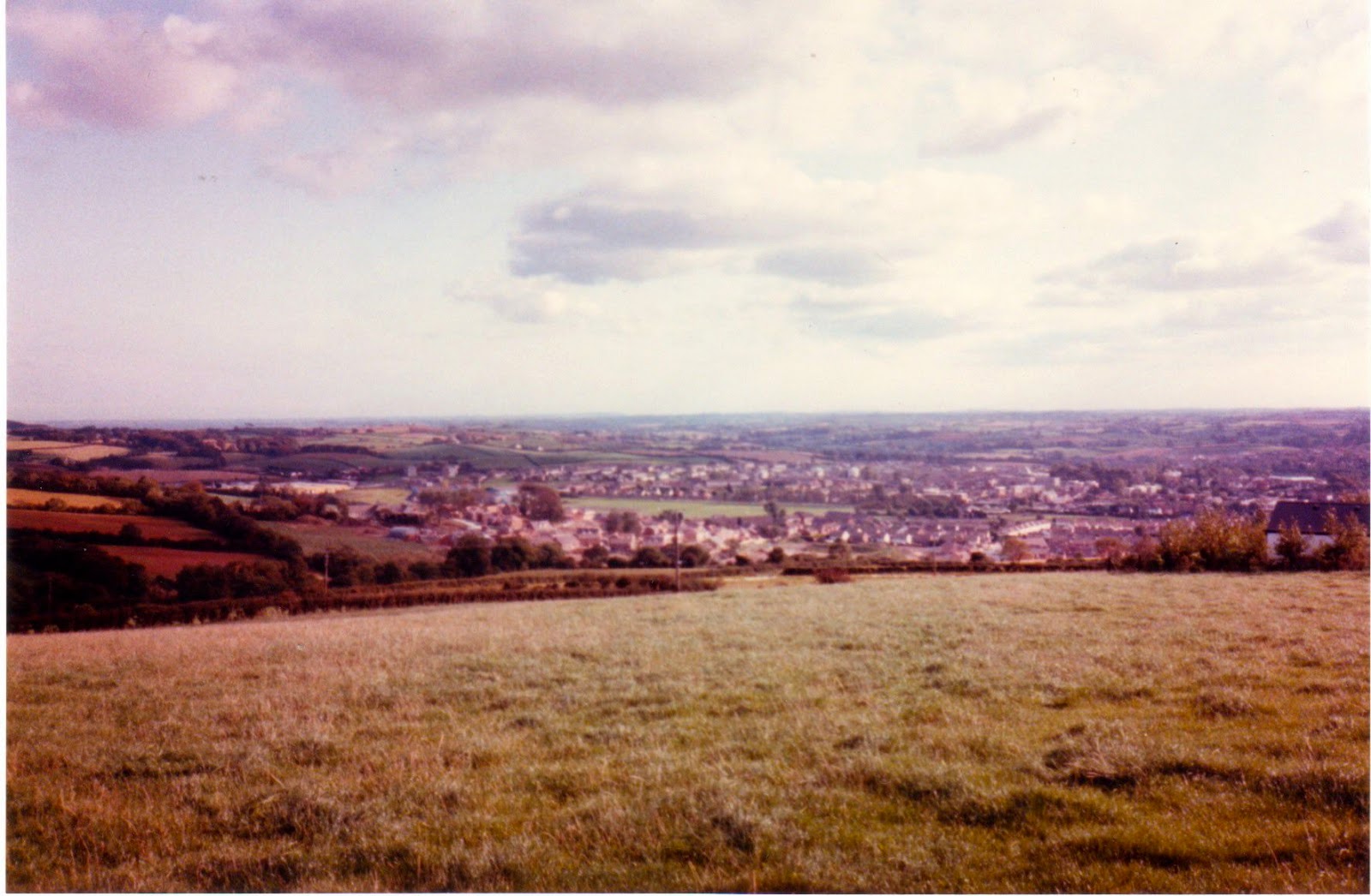 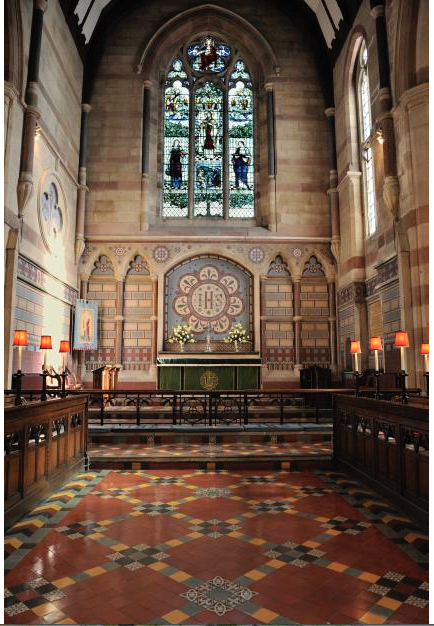 She took me by, I think it was the mayor’s house, where an armed guard patrolled the premises.  She drove me by the building where George worked. 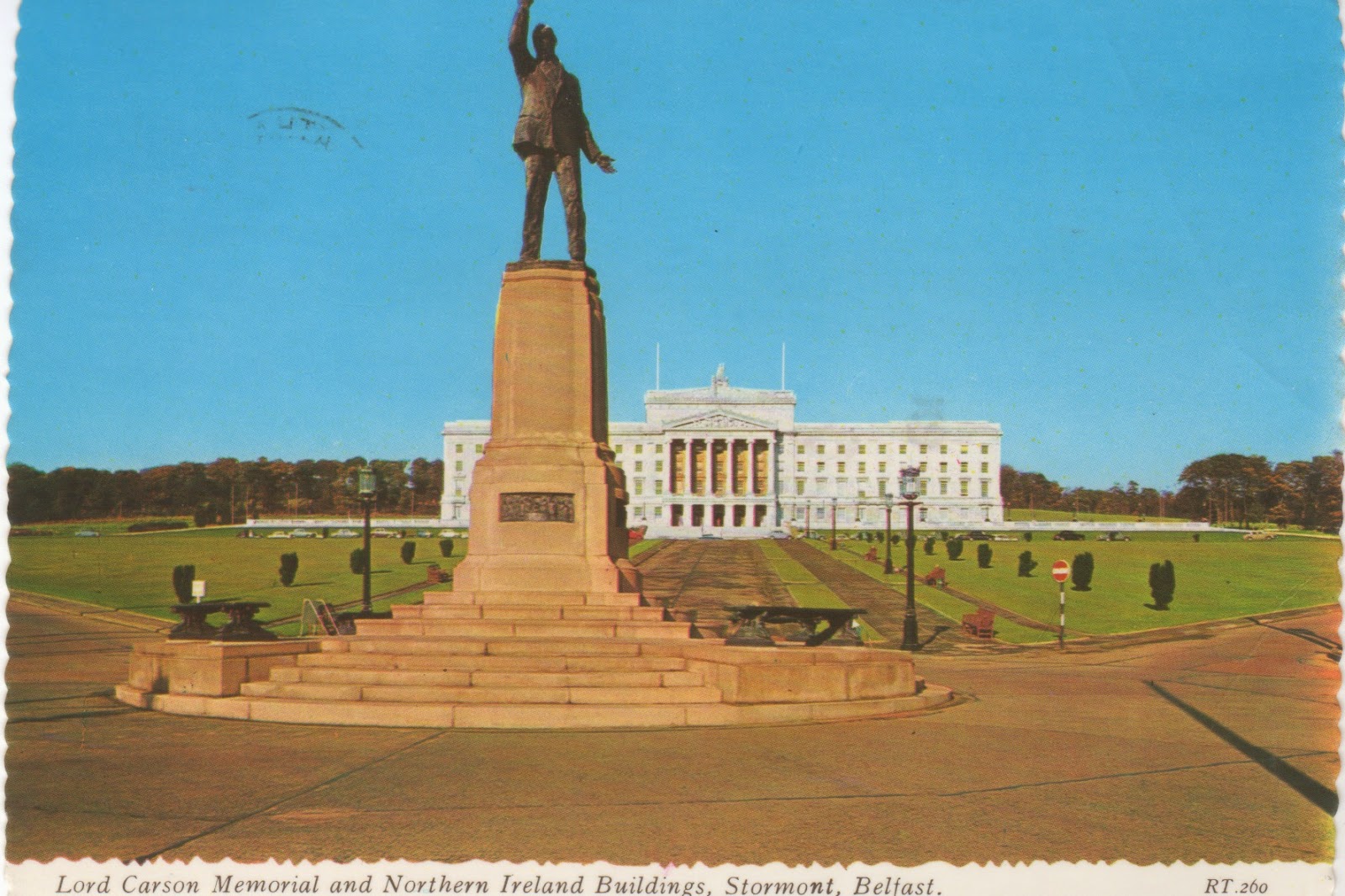 I don't remember if I saw any thatched roof cottages. 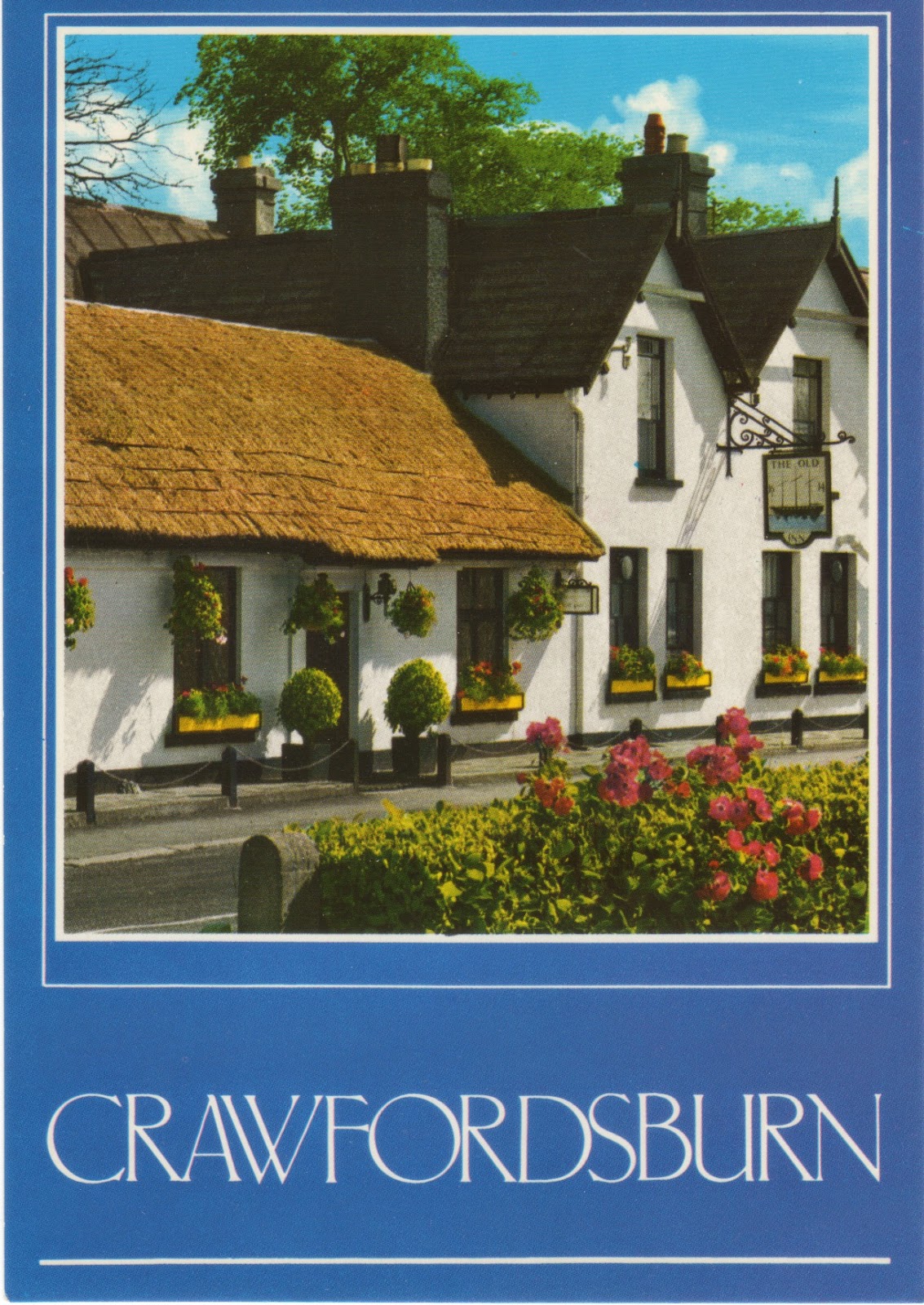 I was impressed that there was no graffiti or beggars anywhere.  Teens were not allowed to stand on corners and attract cars for fundraiser car washes.  They went from door to door and washed the cars in driveways.  Because of the troubles, life was very different for everybody. Of course this was back in 1992, so I believe things are changed there now.

Finally, as we waited for George to take me back to the train station, Alice served me fresh soda bread with wonderful butter.  It was delicious.

The next morning we were off to Paris.  We would meet up with one of Chris’s colleagues from Microsoft, as well as his wife, and two daughters.  Next blog I’ll write about our time in France.