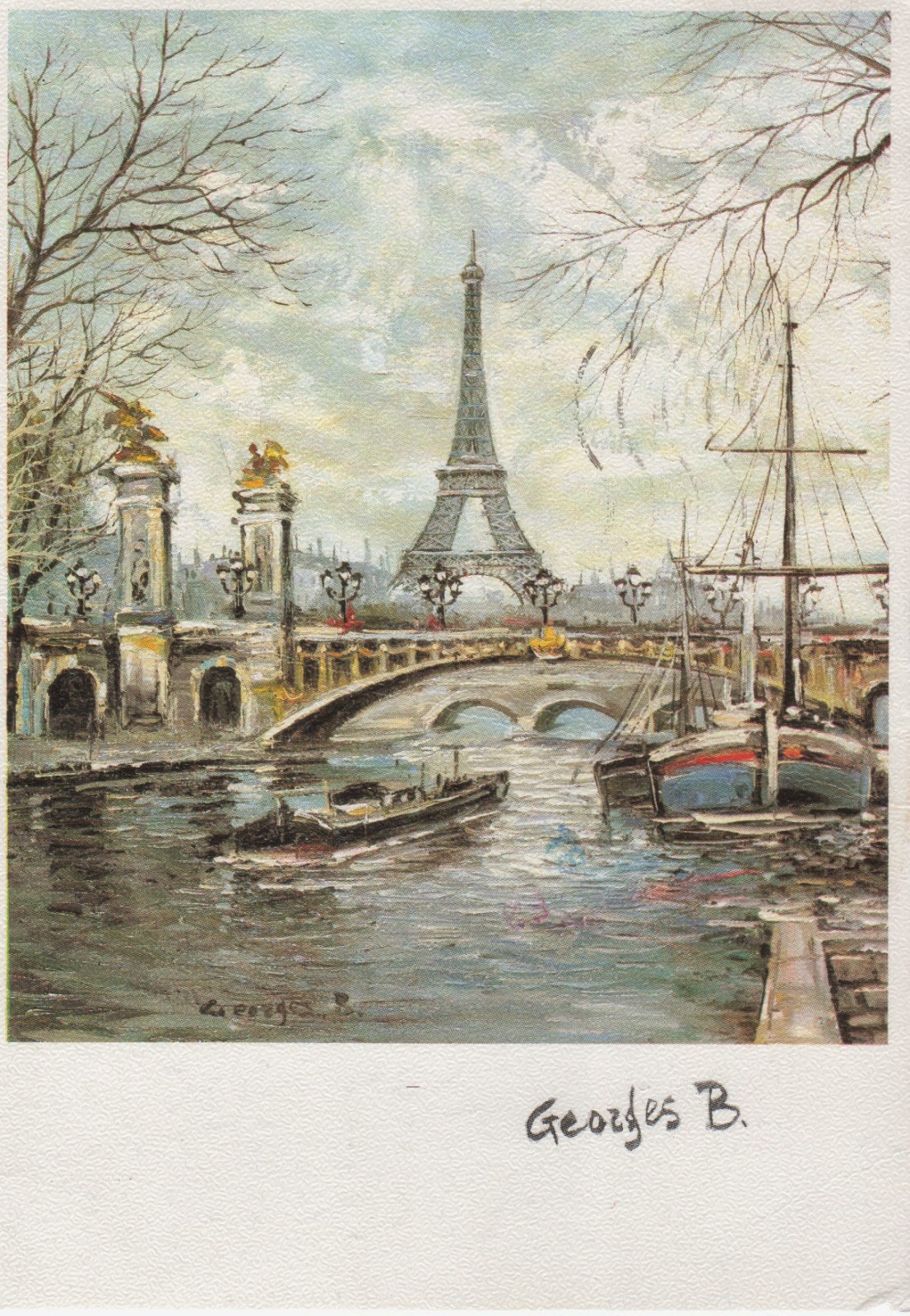 This is the third blog about our trip in 1992.  The lovely little hotel near the Paris opera house, where we stayed, featured breakfast, which included coffee with hot milk, croissant, and fruit, served on white bone china. (Neither Chris nor I can remember the name of the hotel.  My friend Nancy said it goes something like this—“ When you first show the pictures and the videos you know the names of all the places, bridges, buildings, etc.  The second time you show them you say—That is some building we saw, etc.  The third time you say—I don’t think we’ve ever been there!”)

Back to our trip.  In the narrow, brick walled, lobby of the unnamed hotel, we would gather each morning.  Seated comfortably on the French provincial style furniture we would enjoy our breakfast.  After breakfast Chris, and his colleague, David, would set off for the Microsoft headquarters.  David's wife and 2 daughters would join me for different tours around Paris.  A bus would pick us up at the hotel and deliver us back to the hotel after the tour.   We drove by the famous sights—Eiffel Tower, Notre Dame, Champ-Elusees, Arc Triumphe, Louvre, Napoleon’s tomb, etc.  One day we window-shopped.

Chris was able to get away long enough to enjoy a river tour down the Seine, and to spend some time in the Louvre.  We enjoyed a few lunches outside along the Champ-Elusees.  One day we hiked up the winding streets of Montmartre where many artists sell their wares. At the top of the hill is the Basilica of the Sacred Heart of Paris.

One evening we entered a restaurant, which was empty.  We just wanted a bowl of soup.  The person who waited on us said we could not have just a bowl of soup.  We had to order a complete dinner.  We ordered steak, potatoes, onion soup, and wine.  It cost $40.00 for one plate of food.  This was in 1992.  I can’t imagine what it would cost now. Most people in France eat dinner at 8 or 9 PM.  We were always hungry by 5.

The next day I tried to buy stamps to mail post cards.  I was told they sold stamps at a café nearby.  Unfortunately they were only open for business after 11 am, and closed from between 1 and 4.  It was tricky but I was able to get a few stamps between 11 and 1 one day.

We enjoyed a trip into the country with the McBride family.  David is a vegetarian so there isn’t much for him to eat in France.  He ordered rice.  The rest of us had calamari, meat and potatoes. 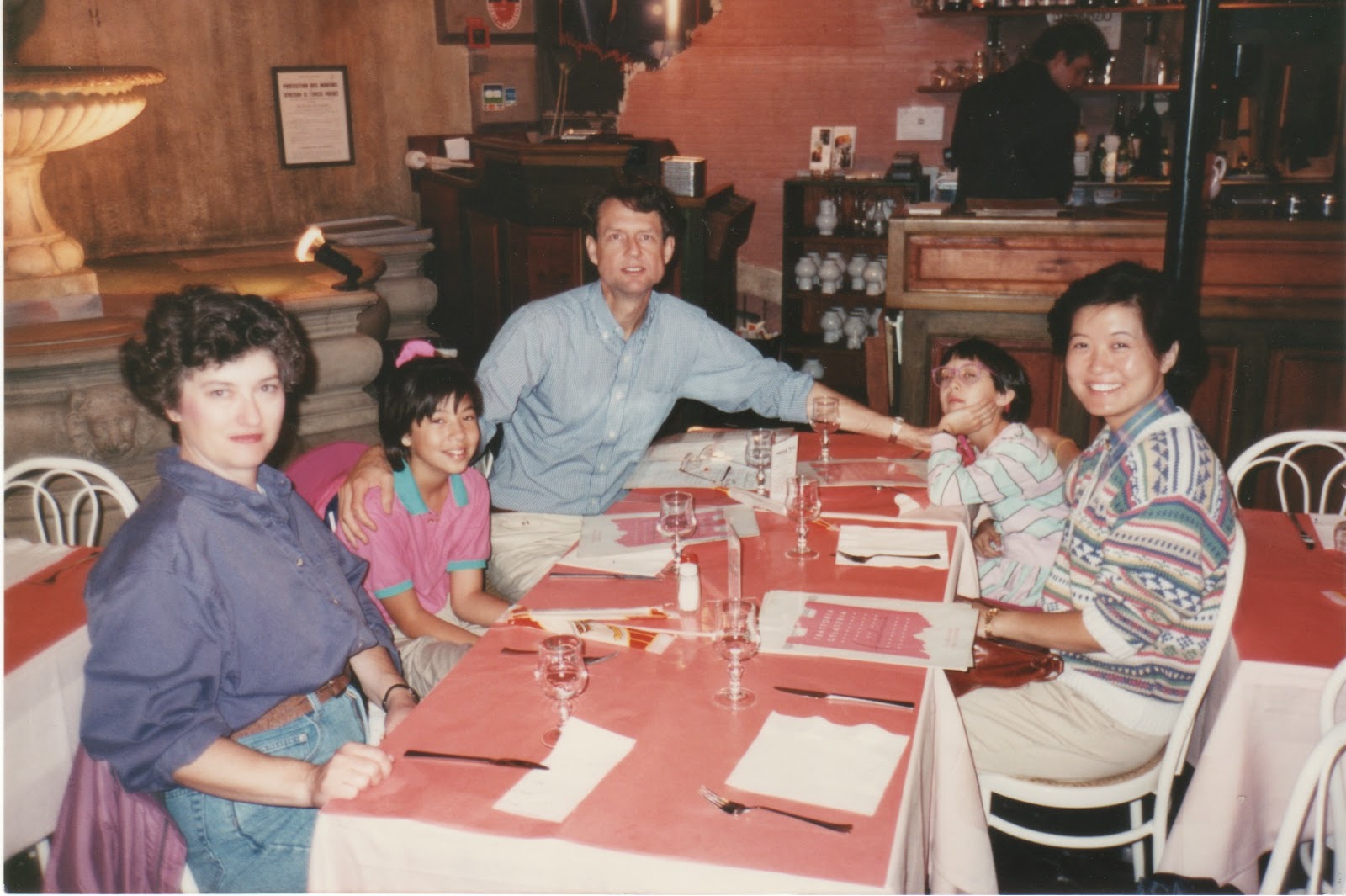 We visited The Château de Chantilly (pronounced: [ʃɑ.to də ʃɑ̃.ti.ji]). It is a historic château located in the town of Chantilly, France.
According to legend, Louis Henri, Duc de Bourbon, Prince of Condé believed that he would be reincarnated as a horse after his death. In 1719, he asked the architect, Jean Aubert to build stables suitable to his rank. The château and the Great Stables were featured in the 1985 James Bond movie A View to a Kill, as the home of villainous Max Zorin (played by Christopher Walken) which was being infiltrated by Bond (played for the last time by Roger Moore) in his quest. 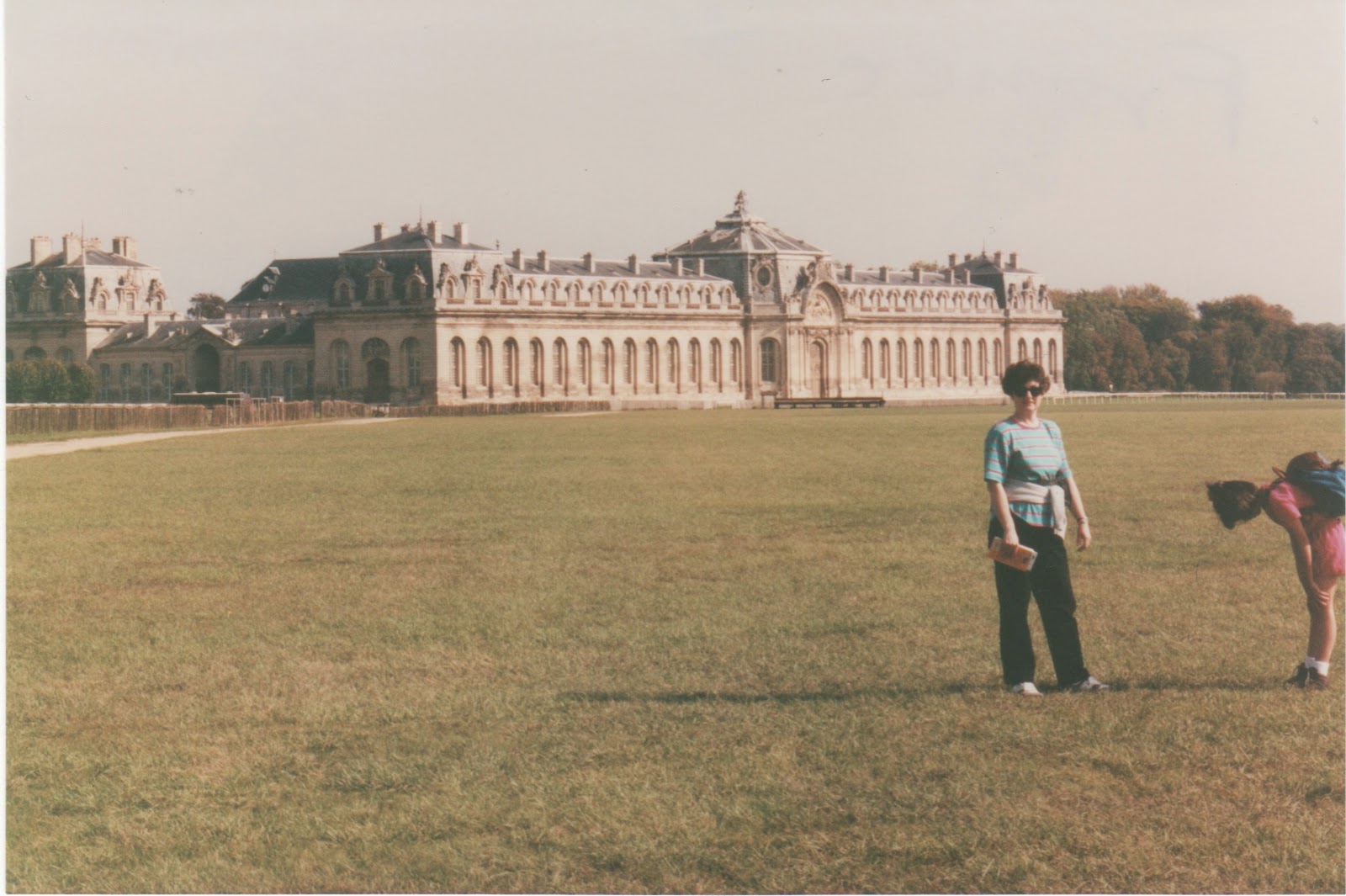 Chris and I took a side trip to Cannes.  The night train was very comfortable. 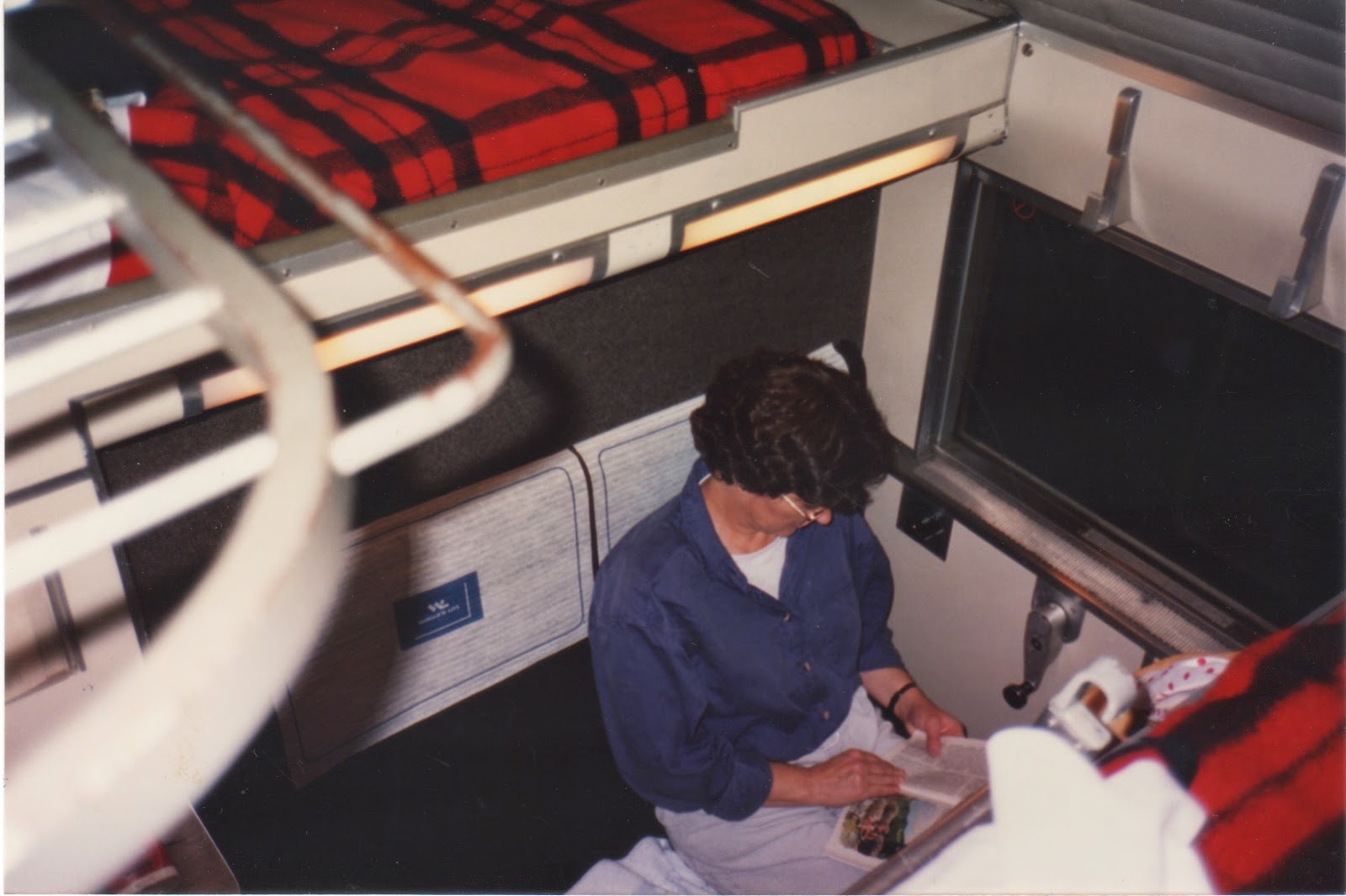 Photo by Chris
We noted that the French have many dogs and they must pick up after their dogs. 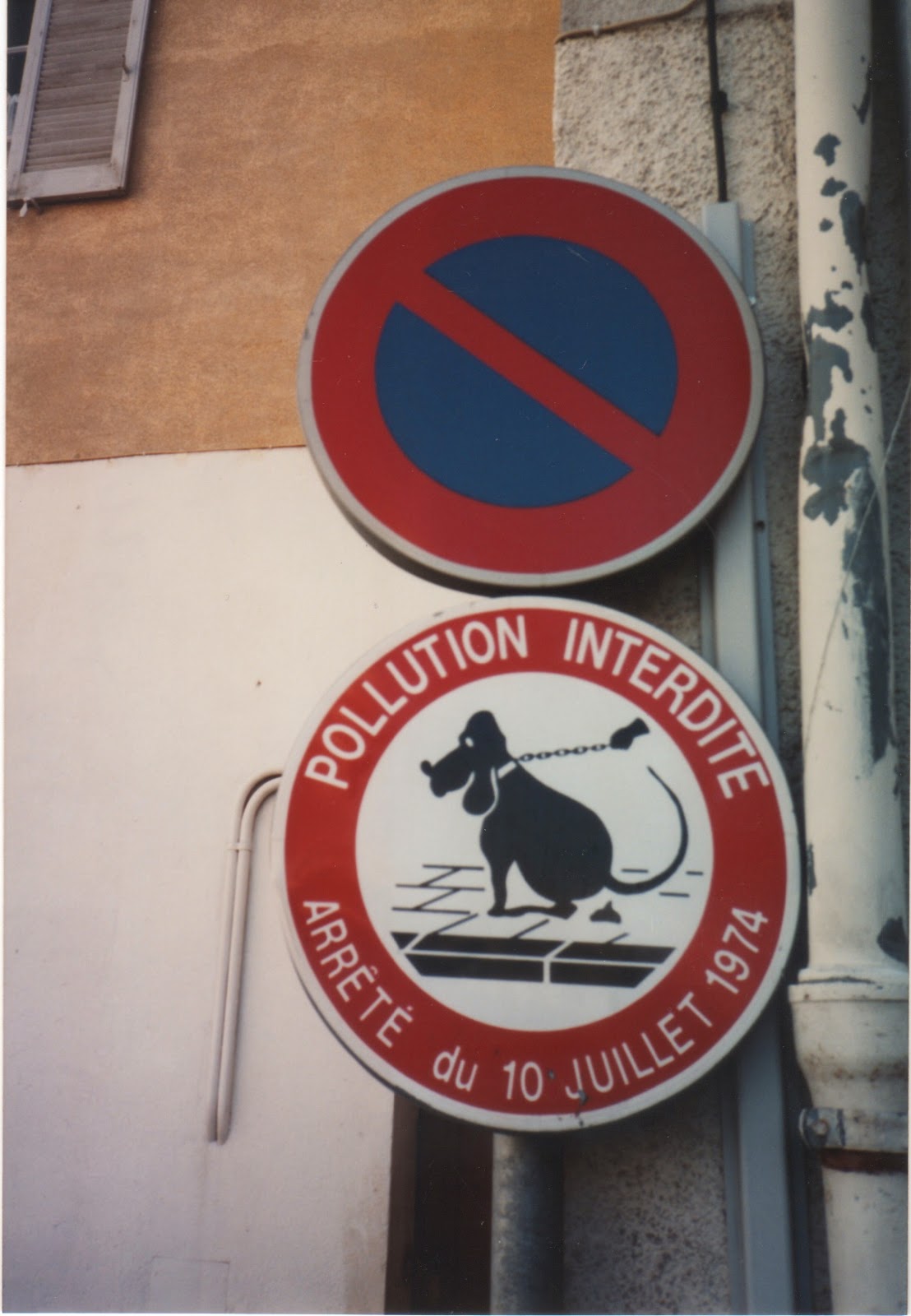 Photo by Chris
We found a laundermat and hired our laundry done—Chris was able to have the whole conversation in French with the laundress. It was a nice town but again we couldn’t find anywhere to have dinner before 8 pm. 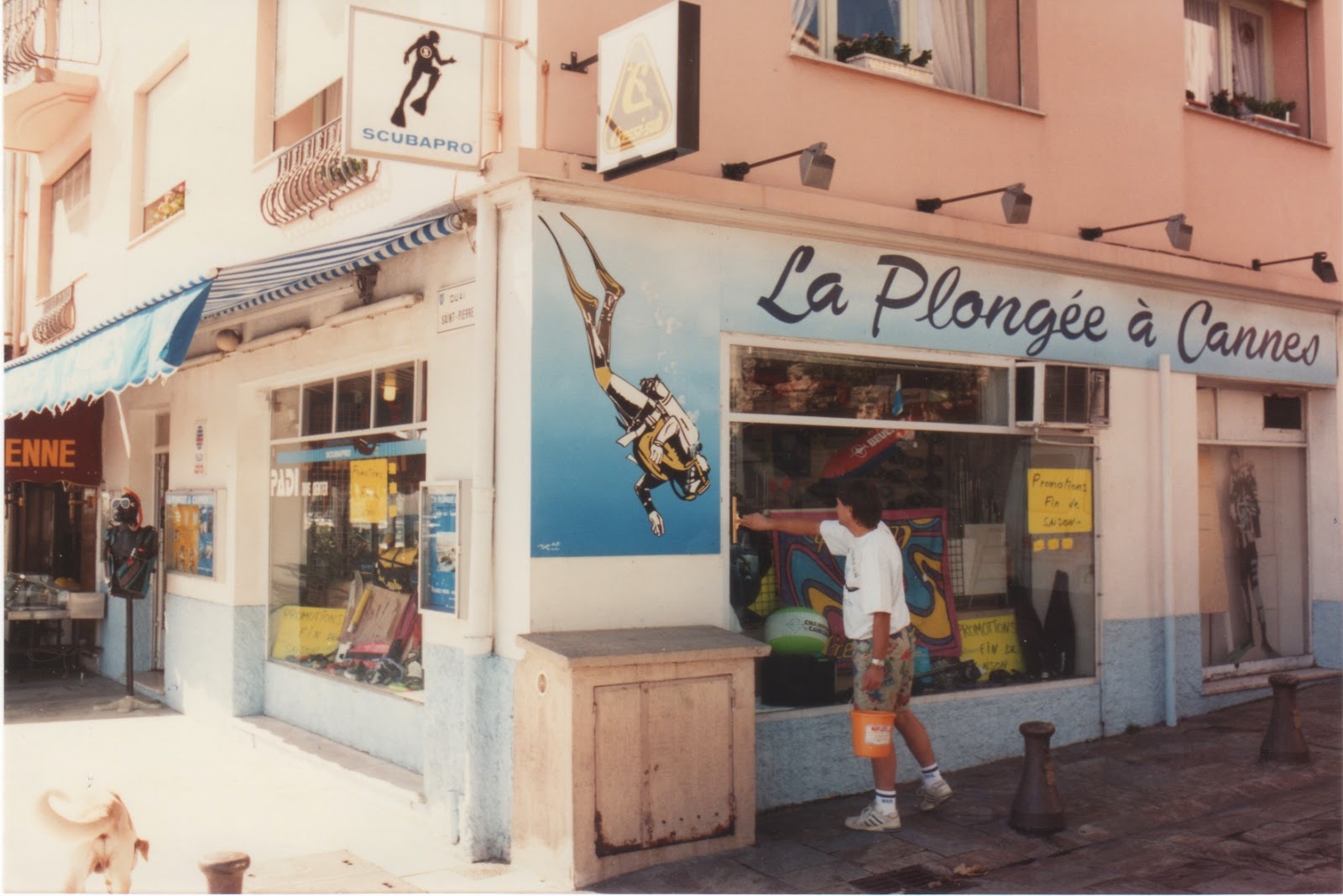 When we went to the train station to purchase tickets for the train to Italy we were told that we could not make a reservation.  It turns out that the train employees are not allowed to strike, but to do a strike anyway, they slow the work down.  We opted to fly.  Next blog will be about Italy.