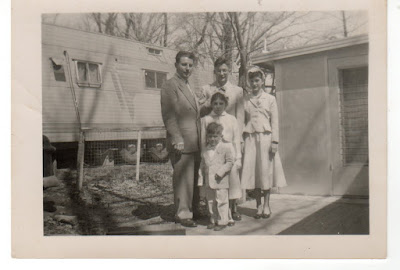 Woodley Hills Easter Sunday 1956– mom took the picture.  She must not have wanted to be in the picture as she was pregnant with Wayne .

Jo, thirteen years old on her last birthday, was the oldest girl in the Jones family of six.  They hadn’t planned to live in a 32’ trailer with bunk beds along the hallway. The whole point of living in a small trailer was to save money for all four of the children to attend college.  The family had two choices to achieve their goal—either lower their cost of living or raise their income.  They were first trying to lower their cost of living.  Fortunately most in the family hated to shop so there was no chance that they couldn’t stay on a budget.  Most were willing to eat just about anything.  No picky eaters in this family.  (They had no clue that their dad did not like spinach.)

But Jo’s bed was the bottom bunk next to the kitchen.  When Dad was on the night shift he would raid the mini-refrigerator for something to eat before bed.  Jo could hear him chewing.  She was annoyed because as she tried to sleep his chewing kept her awake.  There must be another way to raise money for college she thought.

Mom did have her old potable Royal typewriter.  Maybe she could write a blockbuster novel. But what should she write about?  Or maybe a candy making business would help.  She really wanted to be a ballerina though.

Soon Grandpa was coming to stay with them.  The last time he stayed with them he dug a hole in the backyard. He was determined to build a bomb shelter as he had a feeling that the communists would soon bomb them.    There was even a Communist political party in the United States.  It is a free country after all to believe whatever you want to believe.