MY LIFE AS A DICTATOR 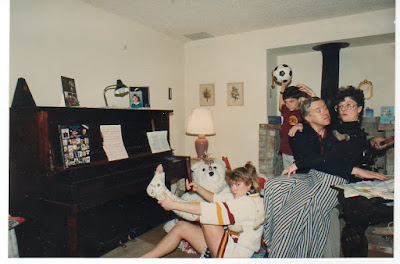 Our daughter wanted to use this pose for our Christmas card in 1988.  She believed this depicted my dictatorial attitude and the oppression of the kids.  She had an inflamed metatarsal from playing football.

1.  Dictator-- a ruler with total power over a country, typically one who has obtained power by force.

·       a person who tells people what to do in an autocratic way or who determines behavior in a particular sphere:

As I recall, it was around the year that our daughter became a teenager that she was counseling me on what job would be perfect for me.  She said, “You should apply for a job as a dictator.”

Now I don’t know what that says about me as a mother.  In my experience mothers don’t become dictators. (I didn’t think of my mother as one.)  And I really did not want to become a dictator. But for the sake of my children I became one, according to our daughter. 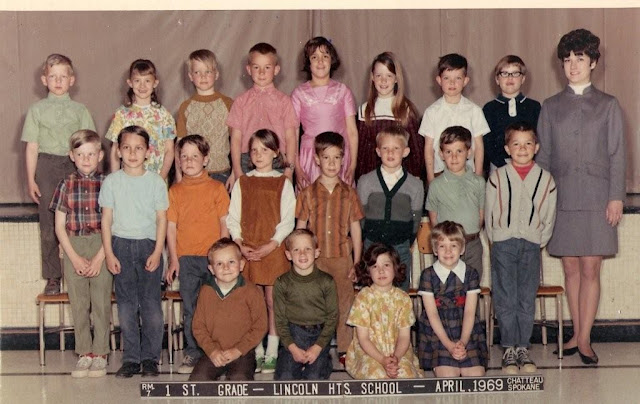 
Years ago, before Chris and I had kids, I had to become a tyrant when I was hired as a first grade teacher. I was shocked that the majority of the children did not do what I told them to do.  I liked the kids, their parents, and the other teachers.  It was just the stress of trying to keep in mind all the different learning levels, and to keep order in the class that made me dislike the job.  It was like running a marathon while juggling live cats and dogs.  For me this spoiled the vocation.   (My older brother was asked to teach Vacation Bible School one year. He let all the kids go out and play instead of teaching them the lesson.  They never asked him to teach a class again. This would have been my preference when I was teaching.  But I didn’t give in to the temptation too often.  We did do loads of finger painting and also many afternoons of folk dancing though.) 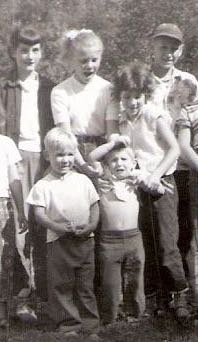 My sister and cousin dealt with my brother.  I didn't want to be involved.

In my growing up years all five of us kids were easy going or compliant. If we were promised a chicken dinner by our parents and we ended up with a hot dog dinner nobody seemed to notice the difference.  We just went with the flow.  (I suspect there were at least two of us who liked hot dogs better than chicken.) I don’t recall any fighting or bickering in any form between us.  Although I do have this one picture of my sister and my cousin trying to keep my next to the youngest brother in line for a picture.  Notice --I chose to ignore the whole thing.  I didn’t want to be in control.  That was for somebody else to do. So when I discovered as a teacher that the majority of children are strong willed, I had to change my ways.

After three years of dealing with first graders I was exhausted from holding the line against hostile forces in the classroom.  I had to set boundaries against bullying, implement a reward system for hyper kids, help with dressing and undressing kids in winter clothes to go outside, act as a crossing guard, playground teacher, lunch room teacher, do inventory, prepare lessons, bulletin board duty, etc., etc. I finally got smart and appointed committees to put up the bulletin boards, clean the classroom, assist me with grading workbooks, etc. etc.  I see no reason why 6 year olds can’t help out.

So I came to my limit with teaching.  I quit my job.  I went to work at the local library.  The library was the perfect place for me.  (Chris and I always checked out the libraries wherever we were visiting or living at the time.) I reveled in the quietness of the atmosphere and the appreciation I received from helping library patrons. 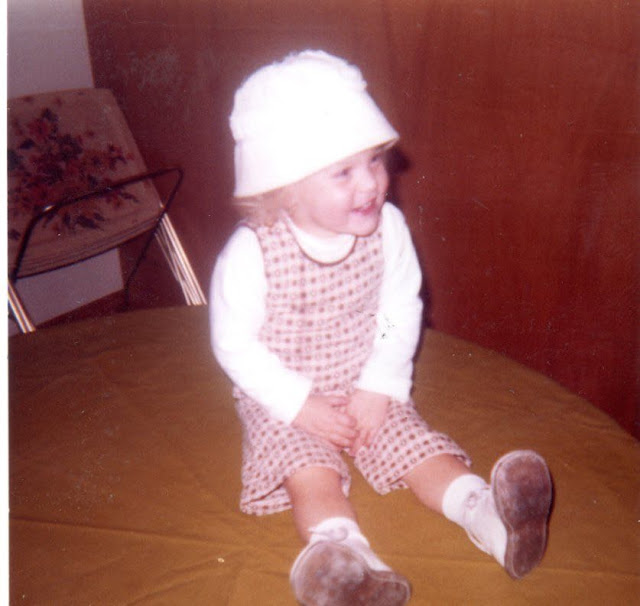 Strong willed baby insisted on sitting on top of the dining room table.  I moved all the chairs into another room so she couldn't climb up. 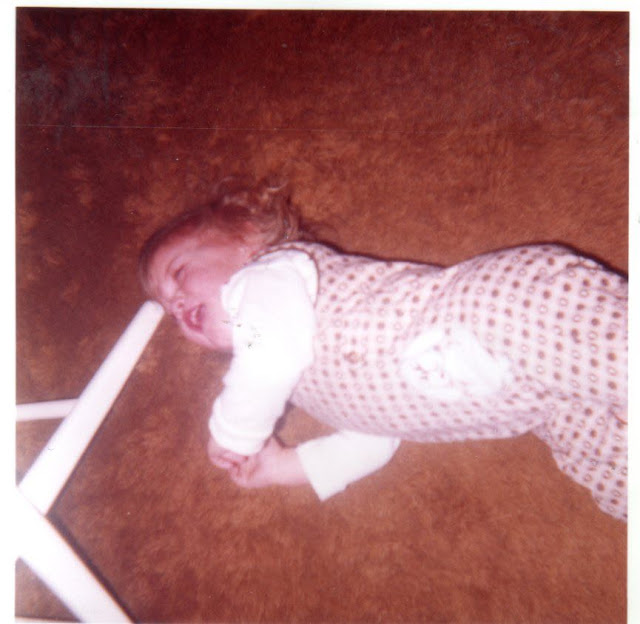 Strong willed baby threw temper tantrums when she was removed from the table.

Then, four years later, along came our strong willed daughter. She
brought me to my knees in prayer.  I prayed and asked God for help.  I joined a mothers of preschoolers  group. I began reading parenting books.  My favorite was “Help, I’m a Parent” by Bruce Narramore.  I got the dictator part down pat.  As a result of firm boundaries for our daughter to press against she knew the guidelines.  She was afraid, from the time she was two or three until she was nine, to get out of bed after I put her to bed at night.  She asked if she could get up to get a drink of water one night after I had put her to bed when she was nine.  I allowed it, as I knew she could put herself back to bed.  (I found out years later that she taught her brother to get out of bed, hide behind the couch, and watch “Mash” when we were watching.  Don’t know what that did to their brains.) Our son turned out to be a compliant child.  When I put him to bed he was glad to stay.  Except, many years later, I found out that he did a little sleepwalking.

In high school our daughter would not get out of bed in the morning until her dad turned on the heat.  But, she said, that if she heard my voice she was up immediately.  A smoke alarm going off would not wake her but my voice would! (My parents gave me a clock radio when I was 12 or 13 so that I could set it to get myself up.  Being the compliant child that I was, I got up with the help of the radio, all on my own.)When she was in college and our son was in Jr. High I joined a Moms in Prayer group.  I still pray for my grandchildren in a group.

So all of this to say I’m retired from my job as a dictator.  I hated that job.  But I loved my children enough to set expectations.  Our children turned out to be God fearing, responsible citizens.

Now, grandchildren are the best.  We let them do whatever they want and then send them home!  (One time we were supposed to help with homework and it went completely out of our heads.  We ended up sending the homework home to be done.)

I’m finally able to relax.  Now, I learn, that our daughter has become the dictator in her house!    Her older child told the younger one—“You might as well give in as you won’t win!”