Here's what the older brother in the Parable of the Prodigal son should have done. 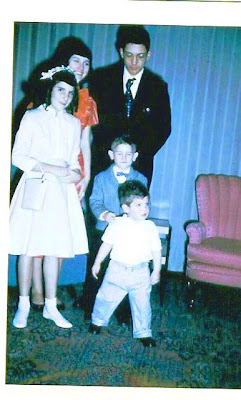 
Here’s my take on the parable of the Prodigal son, (Luke 15-32.)  I can certainly identify with the older brother (though I'm not a male), as I was the oldest girl. I had three brothers and a sister.  As the oldest girl I was given responsibility to help my mom. (One of my brothers was older than I was by two years, but he really couldn't be counted on to do much, if anything around the house.  Maybe he was autistic or something.) Anyway, I was my mom’s helper until it slowly dawned on me that  I was invisible to my parents --at least I felt that way.

Why did I feel invisible?

While my sister and I tried to grow up in one piece, my brothers were always trying something dangerous or cracking their heads open. So that required much of the attention of my parents.  But then my sis developed a cyst on her neck when she was about nine.  I was the one to discover it.  My folks took her to the doctor and surgery was recommended.  I was left at home trying to keep my brothers from killing themselves.  A few years after that my mom came down with pneumonia.  So I had to take over preparing the meals using only what little food was in the house.  I think we only had one car at the time and my dad and older brother were the only drivers.  Neither had the time, nor felt the need to shop for groceries, or help around the house. Because of these happenings, and others, I felt I was taken for granted, or invisible to my parents. (I remember one compliment  my dad said to me one night.  All we had in the house was eggs and tomatoes.  So I made baked tomatoes stuffed with egg, and he said, “That was good what there was of it.”)

So when I think about the older brother in the parable, I picture myself holding down the fort while everyone else took all the attention.  But I didn’t become bitter like that older brother.  I refused to do that.  Instead I ran away from home when I was thirteen and my parents helped me. (See my blog on Running Away.) When I returned home after three months, everything returned to the norm and I again was the go-to girl.  (I then began telling my mom that she needed to hire a maid and she did until the maid dropped her Rex Air Vacuum down the stairs.)

But, then at fifteen I refused to babysit anymore.  If the older brother in the parable had just spoken up, as I did, I’m sure his father would have given him some attention.  Maybe the older brother was phlegmatic as I was and it was difficult for him to summon the energy to speak up.  When his brother came home he should have let go of his bitterness and gone in to the party and loved his brother.  Then he should have trusted that his father would give him everything if he would just ask.

As for me my display of "civil disobedience” resulted in the household chores being distributed to others.  Few chores were given to my older brother as he could go through a tank of hot water washing one dish.  I give all the glory to God.

That’s my take on the Prodigal Son.  What do you think?