The Best New Years Eve Ever 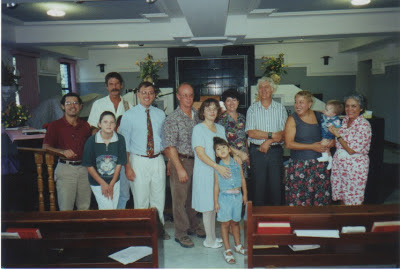 These happy people are brothers and sisters in the Lord who we met in La Paz, Mexico when we were living on our boat at Marina Del La Paz.  Martin Gonzalez, 4th from the left with the tie, was kind enough to preach to us on Sunday mornings at a local Baptist church before the real church had their service.

After sailing our 40’ boat, Flyaway, to Mexico several years ago we became “stuck” on the dock at Marina De La Paz.  (Many cruisers become stuck on the dock but that is another story.)We were blessed to attend a church for cruisers and others who spoke English.  We met "Reggie the Carpenter,"  5th from the left who did some carpentry work on our boat.  His wife and daughter are next to him.  I'm next and then a gentleman I don't recall.  Next is Elaine and I believe Marie.  Don't remember the name of the baby.

About a week before New Years Eve I invited Elaine and another cruising couple along with their grandson over to our boat for New Years Eve to play games.  Suddenly we all were invited to Milton and SuSu's, (another Christian couple who are keeping the English church going),  compound that they had just purchased.  We ordered pizzas and soft drinks and several groups played Mexican Train, Balderdash, and a few other games.  I was fortunate to be in the group with the grandson of the couple from the marina.  He came up with the most creative and outlandish definitions for the words in Balderdash.  I never laughed so much in my life.  He didn't win but in my book he won the contest in creativity.

I had prayed that the couple who sailed down to La Paz with us would meet Milton and SuSu and maybe Milton and SuSu would witness to them and draw them to Jesus.  It happened and the two couples talked that night.  PTL!

As I remember we sang in the New Year with praise songs.  We didn't leave the compound until after all the people in La Paz were finished shooting their guns into the air.

I'm looking forward to seeing these Christians some day in Paradise.
Posted by Flyaway at 4:11 PM