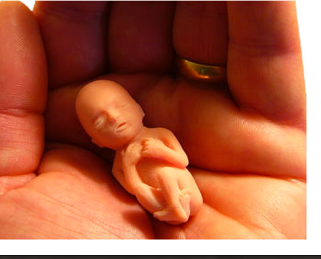 Societies change.  In the mid-twentieth century the United States transformed from the values our country was founded upon (and what we taught our children) into something that we don’t recognize today. Instead of imparting the golden rule to our children we:
·      Look out for number one.
·      Do your own thing.
·      No more of this nice guy stuff.
·      Whatever feels good do it.
Instead of "Do unto others as you would have them do unto you" it is now, "Do unto others -- then split!"  And this is even happening in the Church today! Many people who call themselves “Christians” now chase after what the world offers: sex, money, fame, and suchlike (oh yeah, don't forget drugs and Rock and Roll Idols).
Case in point: abortion?  First, it is fair to say that most Churchgoers believe that God creates human life. And, in the last 70 years science has shown that from moment of fertilization, the egg (or probably more correctly the embryo) holds a unique human DNA.   Therefore, it goes without saying that a fertilized egg is human life.  Since, it is the commonly held belief within the Church, that man does not determine when life begins or ends (this is in the dominion of God), a fundamental question arises: should man then destroy human life with abortion?  Arguably, up to one-half in the Church have supported abortion (or at the very least given their approval through their silence.)   "What about the suffering of the woman," they rationalize, "isn’t she more important than an unborn baby, should she be punished with a baby?" Or the often heard, " Women will seek out abortion anyway, so let’s take it out of the back alley and make it safe."
Planned Parenthood reported that in 2011 they preformed 333,964 abortions—up from 329,445 in 2010.  Are there that many women who need this surgery desperately? Is abortion being used as a birth control method or selective abortion of female fetuses?  How many women have had complications from this operation?  Have infections, damage to the woman’s reproductive organs, or death been worth it?
Now instead of having a procedure such as this done by Planned Parenthood a pharmaceutical has been produced so an abortion can be performed in the comfort of your own home.  Taking into account the best scientific research and laboratory tests, the FDA still says that morning-after pills can prevent human embryos from implanting—thus causing the destruction of human life. That’s the main fact that every party to this debate needs to get straight.  Will the Church remove their brains out of the fog and admit that these pills are destroying life?  Will more women die or experience serious infections because of these pills?
So was the Supreme Court correct to rule that abortion was a constitutional right?
“In Missouri and 17 other states, the laws recognize a fetus as living at the time of conception.  In the case of former pro football player for the Carolina Panthers, Rae Carruth, was convicted of conspiracy to commit the murder of Cherica Adams, who was seven months pregnant with his child. He was also found guilty of shooting into an occupied vehicle and of using an instrument to kill a fetus. Adams died of a result of the gunshot wounds but her child, delivered by Caesarean section survived. Rue received close to the maximum sentence of 19 to 24 years in prison.
On April 1, 2004, President Bush signed into law the Unborn Victims of Violence Act, also known as "Laci and Conner's Law." The new law states that any "child in utero" is considered to be a legal victim if injured or killed during the commission of a federal crime of violence. The bills definition of "child in utero" is "a member of the species homo sapiens, at any stage of development, who is carried in the womb."” About.com
Therefore there are some laws protecting the unborn but abortion is still rampant in the United States.  Some have called the killing of these unborn babies a holocaust.
John the Baptist wasn’t afraid to tell King Herod the truth in another matter in Matthew 1: 3-4.  “3 For when Herod had John arrested, he bound him and put him in prison because of Herodias, the wife of his brother Philip. 4 For John had been saying to him, "It is not lawful for you to have her.”  Is the Church in the U.S. brave enough to tell our country the truth?
But now we tolerate a law called Obamacare that mandates that insurance covered by employers for their employees provide drugs to cause abortion.   Civil rights for the unborn have been violated.  What will the Church do?  Will we draw a line and hold to it as President Obama pushes against the Church?  If the Church had rallied together and stood against Hitler and not given in, would Hitler have been stopped?   What will we say to God when we appear before Him?