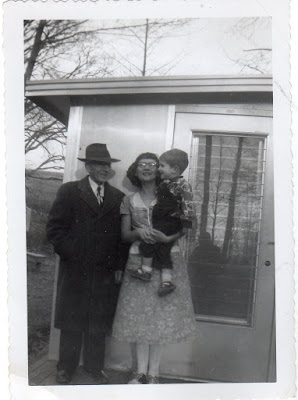 My grandfather, (my mom’s father), lived with us on and off from the 1950’s to 1965.  He passed away in November of that year at age 84. I think the reason for this need to have him live with us was his depression at being so far away from his “girls,” and his lack of a regular job to keep him busy.  His increasing dementia may have had something to do with this also.

We lived in Virginia and his home was in Washington.  Because of the long distance from Spokane, WA to Alexandria, VA this involved tricky logistics of helping him travel to Virginia from Washington and back again several times a year.

I have the letters my parents wrote to each other and to others who helped with Grandpa’s transportation.  One time it involved my dad and Jay traveling with him.  Another time it was my mom with him.  They hitched rides from the Eau Claire, Wisconsin relatives many times as well.

You may ask why I believe that my grandfather was correct in his thinking.  He was correct about the Communists.  As I recall he wanted to build a fall out shelter in our backyard in Alexandria.  I’m not sure how far he got on it.  My brothers may know.  I was out of the loop after I left home in 1961 for college.

It could have been just some paranoia but I think Grandpa knew that Communism was an evil form of government.  It flew in the face of his faith in Jesus.  Communistic governments demand that the State is worshiped and not God.

The Ken Burns special on PBS this month only covers one side of the war in Vietnam.  The Christians who still live in Vietnam today can tell the rest of the story.  They are persecuted and threatened with death and prison.  Here is a recording from the Voice of the Martyrs telling how a pastors wife in Vietnam struggled with the police over her Bible.  They wanted to take it away from her but she was willing to die or go to prison before she would give up her Bible.  Here is another interview on a podcast from the Voice of the Martyrs.  These same conflicts go on in every Communist nation.  Communism is evil and needs to be eliminated.  It will be eradicated in God’s timing.
Posted by Flyaway at 8:27 PM