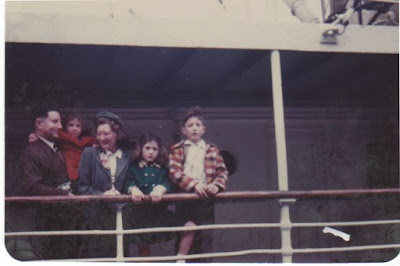 In 1950, the five Stowell’s, mom, dad, Jay, Roberta, and Evy, left Seattle on a steamship sailing to Alaska.  We left behind, in Burbank, CA where we had been living for a few years, two cocker spaniels, Blondie and Blackie, and a white cat named Beauty.  All I remember about the trip to Alaska by water was that Jay and Evy got seasick.  I also recall that I talked Evy into dancing the hula around the lounge while Hawaiian music played.  I had learned tap, ballet, acrobatic, and hula dancing in my dance class in California.  Evy made an impression on the other passengers, as she was only 3 years old!  Several exclaimed about how cute she was. 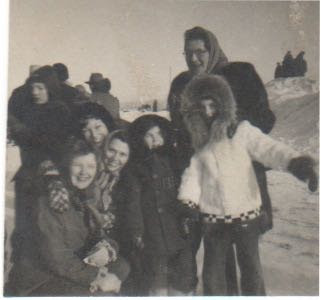 On the left front Aunt Evelyn, Evy next to me in my new parka, Mom behind me 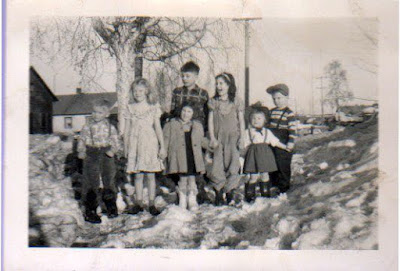 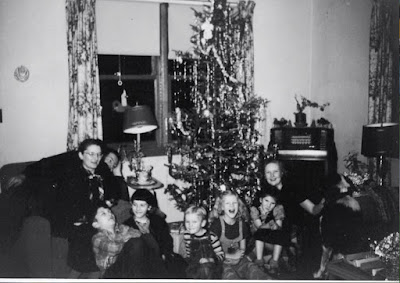 We settled in government housing in Fairbanks, Alaska where my dad was chief of the weather bureau. The most fun I had in Alaska was walking to my cousin’s house and playing in the gravel pits and woods behind their house.  Dorothy was my age and Richard 2 or 3 years younger.  On my way to their house I would steel myself to walk past some vicious dogs that would bark at me every time I went by.  After being mauled by our neighbor’s red chow dog in California I had learned to never run from a vicious dog. 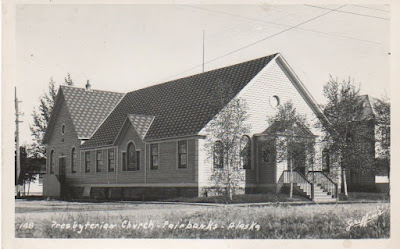 We had school and church activities to enjoy.  I remember memorizing the Alaska Flag song at school.  I still love that song.  I participated in a Tom Thumb wedding.  I was the tallest bridesmaid.  I also did an acrobatic routine during the half time of a basketball game. 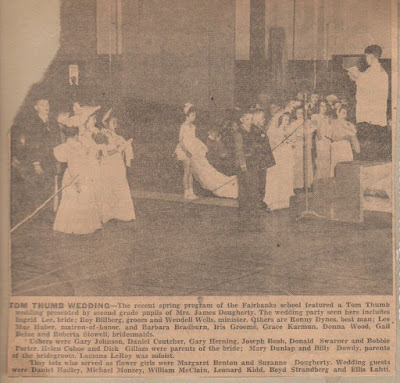 A Snedden cousin bought the Fairbanks paper.  My brother, Jay, had a newspaper route.  He saved his money and bought a 22 rifle. 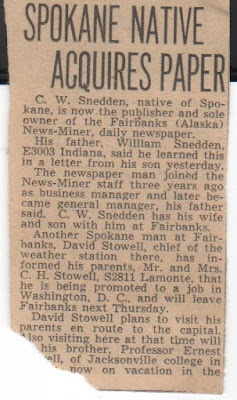 My dad would give the forecast every year for the scheduling of the weather bureau company picnic.  Each year he got it just about right.  It would rain before the picnic, and after the picnic, but not during! 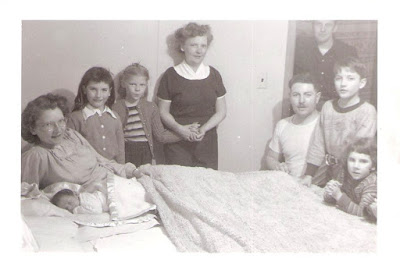 The most important event while we were in Alaska was the birth of my next to the youngest brother, Davy.  My dad wrote a Christmas letter in April shortly after my brother was born.  I will attach it at the end of this blog. 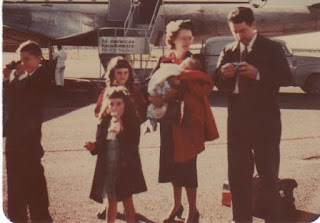 We left Alaska by air in 1952 headed for Washington D.C. area where my dad would work as the assistant to the assistant chief of the weather bureau. We left behind a white wirehaired terrier that had a brown teardrop on her forehead.  I had named her Teardrop Snow-white Stowell. The airplane was a non -pressurized flight.  We had several false starts and delays.  My dad coined the phrase “If time to spare go by air.”  Evy got airsick.  But we made it as far as Seattle and then to Grandma and Grandpa’s farm in eastern Washington.  We would travel to Virginia in October after attending the Four Lakes two-room school for a few weeks.

Below is the letter my dad wrote in April of 1952: 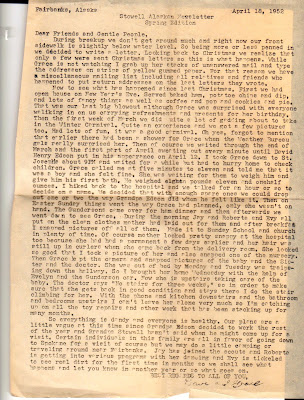