I Was The Hero Of My Own Life 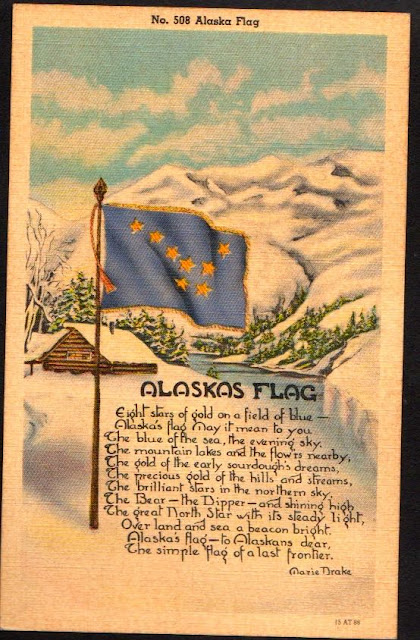 We memorized this song in school.
Somehow my mother was able to raise me to believe that I was perfect, and her favorite child.  I believed her until I was 22 years old.  When Chris and I got married I felt like I was no longer the fair-haired child.  I had damaged my reputation with my mom.  I then was again reminded that I was a sinner just like everybody else.  As a child I was the hero of my own life doing all the right things, so I thought.

I remembered that when I was eight years old and our family was living in Fairbanks, Alaska I believed that I had to be the one to help our family, as they needed my wise guidance. Recently, I found a letter I had written to my mother when I was thirteen.  I was visiting my Grandma Edson.  I encouraged my mom to hire a maid, as the housework was too overwhelming for her.  She did hire a maid but after she dropped my mom’s Rexair vacuum cleaner down the stairs she fired her and never hired another maid. 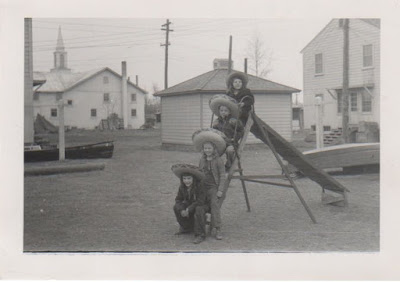 With our cousins who also lived in Fairbanks. Top to bottom Evy, Richard, Dorothy, me.  Our yard.  You can see our boat and church in the background.  We used to throw a ball over the pump house to each other.

Back to when I was eight and living in U.S. Government housing in Fairbanks.  I was annoyed with my mother.  It was the same every day.  When I came through the door out of the 30 below weather, from third grade, my mom would be cooking the evening meal. It was only three p.m.  The scene repeated itself again and again, day after day.  (I should have been happy that I had a roof over my head and a mom to buy the groceries and cook the dinner!)

My mom worked in the kitchen as she stood on the faded linoleum floor.  The old refrigerator, stove, sink, wood table, scarred chairs, and high chair filled the room.  Light from the bare bulb overhead shadowed everything in the dark, cold Alaskan afternoon.  My baby brother cried from his cradle.  Wasn’t there more to life than school, dinner, and then bedtime I thought?  Didn’t my mother have anything interesting in her life?  Wasn’t anything exciting ever going to happen? 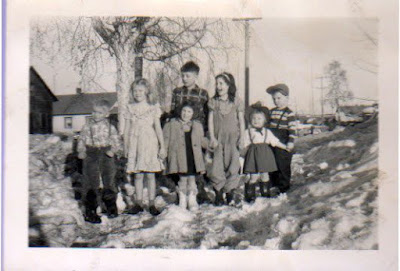 Spring breakup.  We had snow and floods sometimes in July.  Left to right Richard, Dorothy, Evy, Jay, me, and 2 neighbors.

“Mom, where’s Evy?” I asked as I struggled out of my snow clothes.
“She’s upstairs in your room, but before you go and play would you be my sunbeam, like you usually are, and rock little Davy for me?”  Mom wore a bib apron over her blue jeans and sweater, and stirred food on the stove.  It was never too warm in the house.

“Yeah, all right,” I said.  I threw my outdoor clothes on the floor heat register to dry, and walked to the cradle in the corner of the room near the entrance to the living room.  It was away from the windows, front door, and basement door, to keep the drafts off the baby.  I took a breath, and instead of feeling sorry for myself because I always had to help my mother, I tried to think of myself as a sunbeam.

If I were a sunbeam I could fly through the air, go miles and miles, and see the whole earth.  Someday I would travel all over. (This proved to be true—I’ve visited every state in the union, I’ve visited Canada, Mexico, the South Pacific, Japan, and the Caribbean.  I’ve been all over Europe twice.  Have driven across Sweden, etc.)

I rocked the cradle and rattled mom’s keys for my brother.  He stopped crying and looked at me.  He really couldn’t focus, I knew, because he was only a month old.   He started to cry again and I rocked harder, and rattled more, but nothing seemed to help.  Finally, Mom came and picked him up, and took him to change, and feed him.
“Roberta, before you go play, set the table for me.”
“Oh all right.”

After setting the table, I went to play with my little sister, Evy.  We always played school because Evy wanted to go to school, but she was only three.  Evy was easier to get along with than that crying baby, Davy.

The sun dipped down behind the mountains even before my older brother, Jay, got home at four.  He had to carry a flashlight to his fifth grade class at school so he could see to get home because it was pitch black by then.  Living in Fairbanks was a difficult adjustment for me after moving from Burbank, California, but my dad loved Alaska.  He had been stationed on the Aleutian Islands when he was in the military.  So he had moved the whole family to Fairbanks.  Dad worked as Chief of the U.S. Weather Bureau.  But I missed the fresh milk and artichokes that we had in California.  I must have complained to my parents, or else our pilot friend had heard the desires of my heart, because he would bring us fresh milk and artichokes when he had to fly to Fairbanks.

One Sunday after church, our family was invited to dinner at one of my dad’s Weather Bureau friends.  The Ostrander’s cozy house warmed me after my whole family had walked several blocks from our house in the below zero winter day.  (If we had to go any distance we would borrow the government van and drive.)  We brought our portion of the dinner, (artichokes from California, and fresh milk), with us.  Inside of the front door of the Ostrander’s house was a rack for outdoor clothing.  I took off my icy wool scarf, which covered my nose and mouth so my lungs wouldn’t freeze.  My long black eyelashes became covered with water as the ice on them melted.     Ice heated and dripped from my hood.  I carefully removed my white rabbit fur parka -- which was trimmed with wolverine around the wrists and wolf fur around the hood.  Next I took off my snow pants, mittens, and hung them on the low hooks.  Because I had my boots off I stepped over the puddles so I wouldn’t get my wool socks wet.  The wool and fur had a tangy, soggy, smell, but they would dry quickly.

I was happy to see my friend, Bonnie, and her family as they had also been invited.  We played Old Maid before dinner and planned to play again after dinner.  (I always wanted to be the Old Maid, as I was never getting married!)

During dinner I heard my mom say, when the other ladies asked her how she could take care of so many children and the house too, “Roberta is my sunbeam.  She is an extra hand for me.  She very competent for eight.”  I felt good that my mom thought so much of me.  The meal of chicken, potatoes, and artichokes, was eaten, and it was dark again.  Bonnie’s family needed to take their car home to its heated garage.  I forlornly looked out the window as the family got into their car.  I had wanted to play with Bonnie some more.  Snow silently drifted down.  It was getting thicker and thicker in the dark sky.  I heard the engine start up and when the car moved forward it slipped on the icy road and stuck in a snowdrift.

I watched as the car backed and went forward trying to get out of the ditch.  I saw Bonnie’s dad get out of the car and return to the house.
“Could someone give me a push?   I’m stuck in a drift.”
“Sure, we’ll be right out,” said Mr. Ostrander.  The men put on their heavy outdoor clothing and boots and went out.  They began to push the car.    Still it wouldn’t budge.  Bonnie and her mom came back inside bringing a snowy blast of cold air with them.  “I guess it’s going to be awhile,” Bonnie’s mom said.

The men put boards, gravel, and gunnysacks, around the tires.  Still it wouldn’t go.  Finally, I decided that I would have to help.  I put on my warm clothes and went out with the men.  I stood between my dad and Mr. Ostrander at the back bumper in the cold night air and pushed.  Suddenly the car lurched forward and the driver pulled the car to a level place on the road.  Once again I was the one to solve the problem!  They couldn’t have done it without me, I thought.

Bonnie and her mom had watched from the house.  As soon as the car moved they came out and climbed in.
“Thanks for the push,” they called as their breath steamed out the open windows.
I thought to myself, it sure was a good thing that I helped out.    And I felt very happy that I was a sunbeam.  I began singing the Sunday school song:

A sunbeam a sunbeam.  I’ll be a sunbeam for Him.”


And that was another reason I was “self righteous” and the hero of my own life. I must have thought that I was a superhero!

It wasn’t until I was 30 years old that I realized I was only righteous through the blood of Jesus and what He had done on the cross for me.