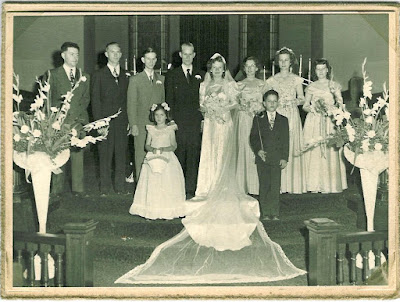 From left to right my dad, Dave, 2 gentlemen I don't know, Uncle Jack, Aunt Ruth, my mom Grace,2 ladies I don't know.  In front -- me on the left and my brother Jay on the right.

These are my memories of my Aunt Ruth and Uncle Jack's wedding--  fictionalized a little for dramatic effect:

The sun beat on the roof of the old bluestone church.  Inside it was dark and cool.   I waited for my Aunt Ruth’s wedding rehearsal to start.  I was seven, and Evy, my three-year-old sister, were to be flower girls for it.  We were nervous but excited. We would spread out the brides train when she got up to the front of the church. Evy and I would carry little white baskets with rose pedals inside, and were to wear long yellow dresses, with ruffles along the neck line, and around the hem.
Grandma, Mama’s Mom, sat in the front pew and fanned herself with a discarded church bulletin from Sunday.  She looked hot and tired.  Grandma and Grandpa had unloaded the decorations for the wedding from the car, and then everybody helped to decorate the church.
I reached out and took Evy’s hand.  I felt secure when my sister was with me.  I always knew that two heads are better than one!  My brother, Jay, was to be a candle lighter.  I hoped he wouldn’t burn up the church.  I had no control over him as he was two years older and had ideas of his own.  The church was St. Paul’s Methodist in Spokane, WA.  It was my grandma and grandpa Edson’s church.  My mom had grown up in the church and told us stories about the Epworth League, which was the youth group she attended as a teen.
I had been in many dance recitals so I knew what a rehearsal was.  When we were told to walk down the aisle of the church we pretended to drop rose petals on the floor as we walked to the front of the church.  Uncle Jack was at the front of the church with his friends.  Aunt Ruth walked down the aisle following Mom and the two other ladies who were her bridesmaids.  It was too bad that my mom’s older sister, Aunt Evelyn, and her family, my uncle and my two cousins, would not be able to attend the wedding. They had moved to Alaska and it was too far to come for the wedding.   Dad was one of the men who stood up with Uncle Jack.
“We’ll see everyone back here tomorrow,” the pastor announced.
The next day everybody got dressed in what they were going to wear for the wedding except Aunt Ruth.  She would wear the wedding dress that my mom had worn, and then my Aunt Evelyn wore it for her wedding.  But she would get dressed at the church so that the dress wouldn’t get wrinkled.  Finally everyone was ready. 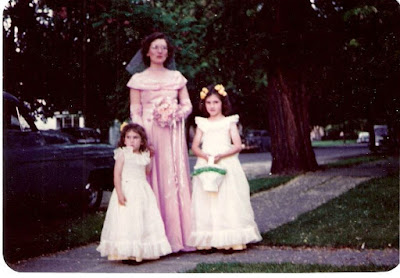 Evy, my mom, me.
On the way to the church Evy fell asleep.  Mom put her in a crib in the nursery and Grandma arranged for a neighbor girl to sit with her until she woke. The organist played and guests arrived.  Still Evy slept.
It was close to the time to start the wedding.  I was worried.  I went to mom.  “Shouldn’t we wake Evy?” I asked.
“If we wake her she’ll be cranky and she won’t help the way you want her to.  You may have to be the only flower girl.”
“Mom, I can’t do it by myself.  I need Evy.  I get too scared.”
“I know you’ll feel uncomfortable without Evy, but you can do it.  Just imagine yourself whistling a happy tune.  Think about how much everybody loves you,” Mom said.  “God is always with you.  He’ll give you the strength.  Now twirl around so I can see how pretty you look.
I took a deep breath and said to herself, I don’t have to be afraid and twirled.

Soon it was time to walk down the aisle and Evy still wasn’t awake.  I gritted my teeth and tried to whistle a happy tune in my mind.  Maybe this wouldn’t be as bad as I imagined either.  I walked slowly down the aisle, stood where we had practiced that I would stand, and watched Aunt Ruth come down the aisle with Grandpa.  She looked beautiful.  Finally the bride and groom were together.  The train floated like a pond of milk covering every square inch of space between the rows of pews and down the aisle.


After the ceremony we had pictures taken.  Evy was still not awake so I gritted my teeth again.  I looked sad in every picture, as I wasn’t happy about being a flower girl alone. During the reception everyone told me what a good job I had done.   I was glad I had made it through the wedding and now I felt happy but it was too late to smile in any of the pictures! 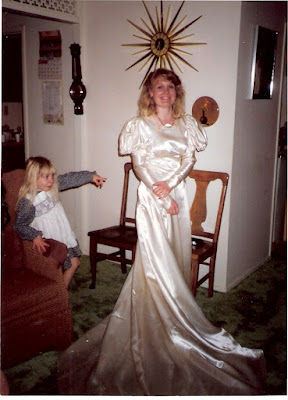