Rita Lorraine And Her Magic Violin 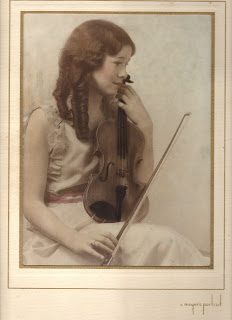 We think this was taken when Rita was a teen.

She slumped, weeping, in the azure armchair amidst dozens of vases of roses placed on the dressing table, end tables, and on the floor of her dressing room.  They surrounded her like cascades of water.  Breathing the air was like taking a breath of heavy rose perfume.  Her red taffeta dress crawled over her legs and feet, covering the red velvet pumps.  She was drained, but she had done it.  She had performed the Tchaikovsky.

Stop!  I confess. This is a fictionalized version as I imagine it could have taken place when my mother-in-law performed with the Spokane Symphony playing the Tchaikovsky Violin Concerto in D Major. The performance was probably right after WW II in 1946 or 1947.   She had practiced for an entire year.  She vowed she would never play it again.

Flash back—Rita was 16 in 1933 when she kept a 1-year diary.  At that time her only class was French.  She most likely had a private tutor.  The tutor’s name is never mentioned in the diary.  She relates how she went home to Potlatch after a trip around Idaho and Washington State playing in concerts, attending concerts, plays, and eating with many in the music industry.  She mentions friends--   Billy Norse (her first boyfriend who lived in a big house next to the apartment in Lewiston.  He would sit on the lawn and listen to her practice.She attended Jr. High there and played basketball in school. She was very excited when she was the only one in the class who made a basket.) Maxine, and Claribel were two other friends.  They showed up periodically to play anagrams and to hang out.  In the spring of that year she traveled with her mother to Portland, Oregon and attended a Yehudi Menuhin concert.  He played The Beethoven D Major concerto and the Bach No. 2 in E Major and Mozart, No. 7 in D Major.  Major Alfred Hertz conducted the orchestra.  She went back stage with Mr. Wallin and Mr. Gershkovitch to shake hands with Yehudi.

Then in the summer she took the bus to San Francisco and was met by Mrs. Havlicek.  She was invited to various homes for meals and attended more concerts and played at several events.

In September she went to Mr. Peterson’s house with the Havliceks to try out a “Strad” and a Guadagnini violin.  Mr. Havlicek decided to stay in California and resigned his position at Washington State College.  Rita wrote to her Mother and she came down and they rented an apartment together. She attended the Northbrae Church with her mother. Havliceks rented an auditorium and invited potential students to watch Rita perform.  This is how he acquired new students.

We have no other record of what she did between 1933 and 1940.  We think she traveled to Los Angeles. We think she then met Jes Brown who we think accompanied her on the piano.  They were married in Las Vegas in 1940.   Chris was born in 1942.  Because of WW II Jes enlisted in the Coast Guard we think in 1943.  Rita and Chris moved to Spokane where Rita played for a radio show called “Rita Lorraine and Her Magic Violin.” My Grandmother Stowell was one of her fans and listened every week.  We think Rita was offered a job with the Hormel Girls traveling around the country. Because of Chris she turned them down.  By that time she owned a Gagliano violin.

If I find another diary I will continue the tale in another blog.  Click here if you would like to see her findagrave.com page.

Here are Jes's observations after he read the diary: