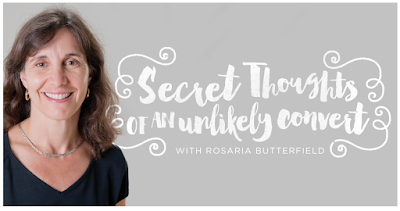 Over twenty years ago Rosaria Butterfield was a tenured Nineteenth Century English literature professor at Syracuse University. She was a staunch feminist, outspoken atheist, and a practicing lesbian.

I first heard of her in 2012 when her book, “Secret Thoughts Of An Unlikely Convert,” was published.  In the book she relates how she was examining the religious right from a lesbian feminist point of view for her latest research project.   At that time Promise Keepers was planning a local event (https://promisekeepers.org/) so Butterfield decided to write an Op-Ed for the local newspaper. She believed that the organization and men in general were oppressors of women.

Needless to say she received many letters from both sides.  But one letter from a local pastor was neither positive nor negative. It was nothing but loving and kind.  With much trepidation she contacted him and was invited to his home.  His wife prepared a simple vegetarian meal for the three of them.  They began discussing the Bible.  Butterfield read through the Bible 7 times to prepare for further discussions.  Two years later she became a Christian.

Click here if you would like to listen or read the transcripts for radio programs where she is interviewed by Nancy Lee DeMoss Wolgemuth. Scroll down to the bottom of the page to start with day 1. I highly recommend the programs.  Worth your time!

A new book just out by Caleb Kaltenbach called “Messy Grace” sounded interesting.  Caleb’s parents both came out as homosexual while Caleb came out as a Christian.  He tells the story of how God’s grace worked in their lives.  Click here to read more about the book.

I enjoy learning about how others overcome their struggles.  It comforts me to know that I am not alone in my thrashing about.  Do you feel the same way?
Posted by Flyaway at 5:06 PM