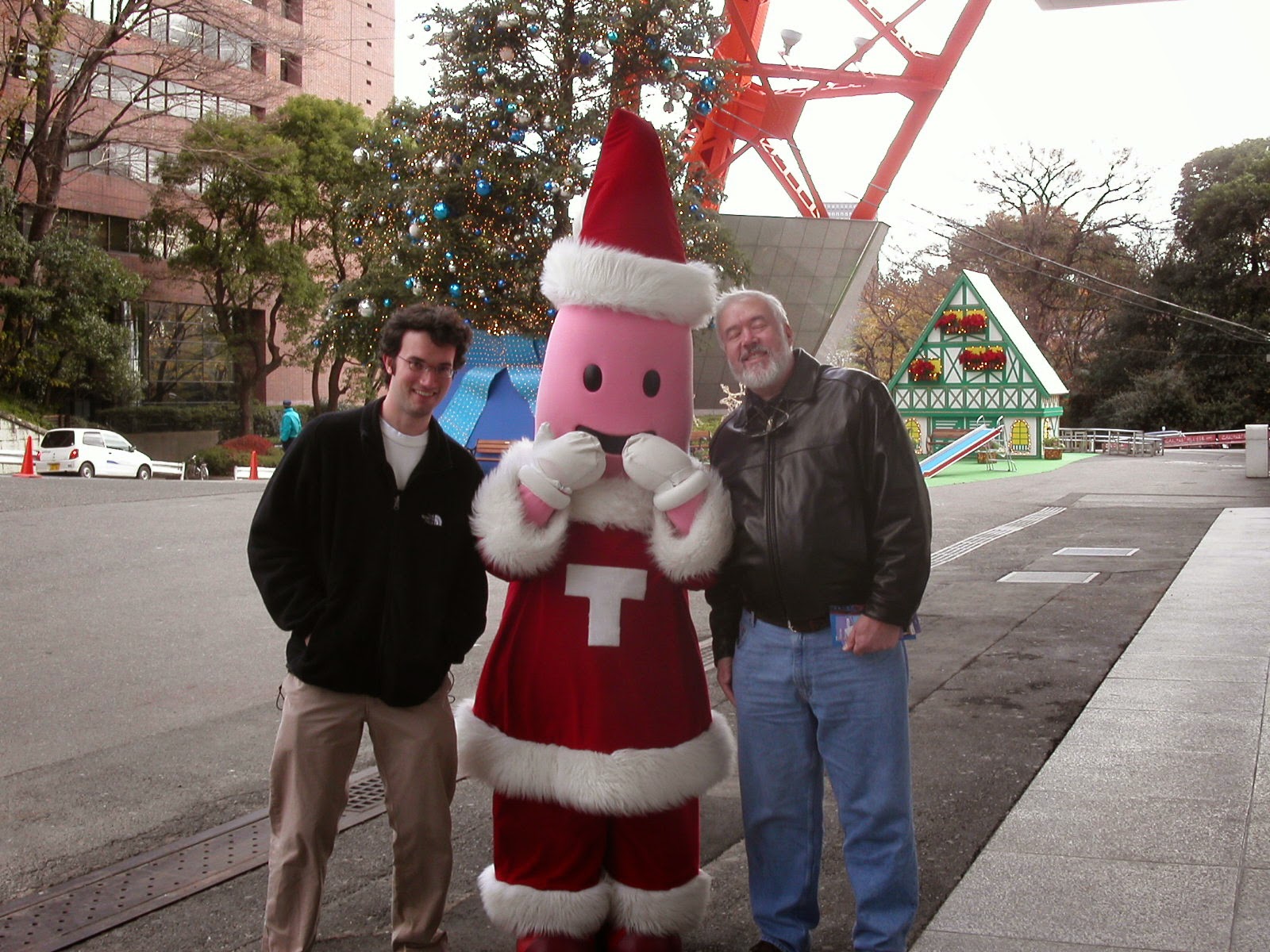 Jes and Chris at Tokyo Tower.  Photo by Bobbi

It was in December of 2004 that Chris and I flew from Seattle to Los Angeles and from there to Tokyo.  We were fortunate to be able to spend Christmas with our son.  He was living in a small town south of Tokyo and teaching English as a second language.  With frequent flyer miles, and a place to stay, we thought it was a good time to visit.

Everything in Japan is small—especially compared to the U.S.  The land area is small as it is about the size of California and it is about 75 % mountainous.  There are small people, small cars, small capsule hotels, small amounts of food, and small apartments. 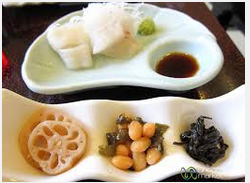 Jes’s apartment was big compared to most apartments in Japan.  He had two bedrooms.  Outside was a vending machine where one could purchase hot drinks. The weather was cold and clear and since Jes had only one electric heater to heat his apartment Chris bought several more. Jes’s car was compact but we managed to fit the three of us in it. 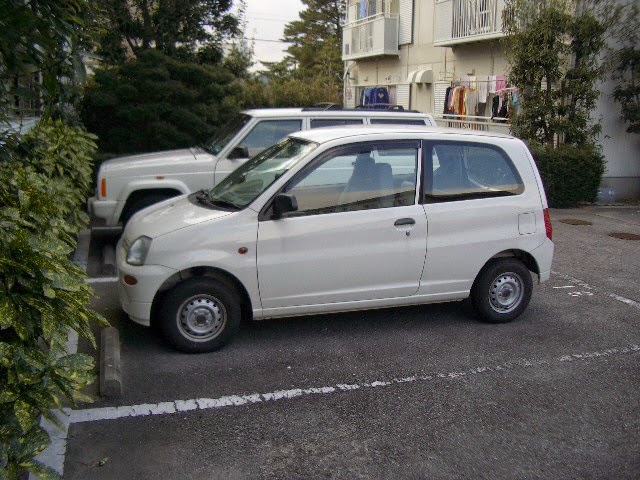 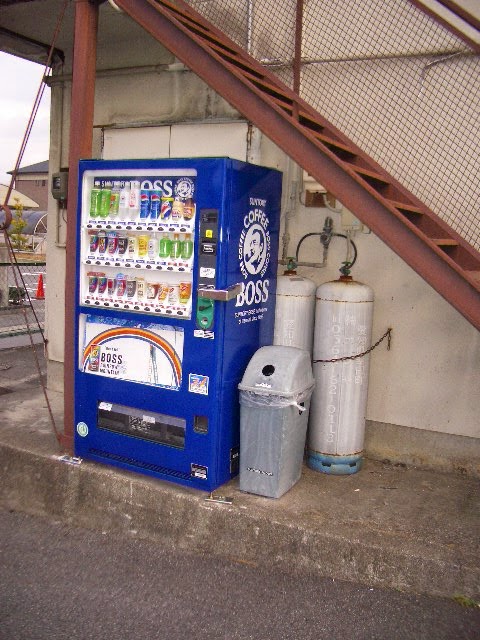 Jes had the hum of the bullet train to go to sleep to because he lived within walking distance of the train station.  See his list below:

You know you’ve been in Japan for awhile when…
January 31st, 2005
I’ve been in Japan a little over 10 months now. That really isn’t that long in the grand scheme of things, but here are some observations that I’ve made. This is one of those trite “you know when…” type things, but here it goes.
You know you’ve been in Japan for awhile when…
1.   you watch movies (of course not English or Japanese movies) and they always seem to be driving on the “wrong” side of the road.
2.   you think nothing of paying 5 dollars for 2 apples (okay you might gripe a little).
3.   the roar of the shinkansen (bullet train) tracks reminds you of the ocean. It soothes you to sleep.
4.   you go shopping and even though you don’t know the words to any of the songs (aside from the song about fish) you instantly hmm the melody.
5.   you aren’t scared of raw fish (well too much anyway).
6.   you enjoy playing “chicken” with other drivers on so-called “2-lane” roads. I guess I should say so-called “roads” as I know of larger sidewalks!
7.   you can critique stores on the various “elevator music” different stores use. I say, Gigas has my vote. Definitely the best use of harmonica in that type of “music".
8.   you tend to bow at everyone and everything. It happens. Sometimes you bow just to make sure.
9.   you do a better recycling job than some of your neighbors.
10.            life starts to seem normal. 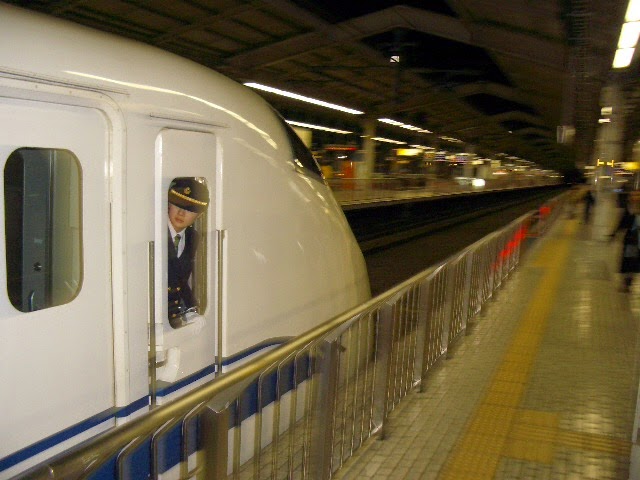 The town was all paved so it was great for cycling.  Here is a view of the City Hall.  In his town many people were middle class and worked for the big companies. 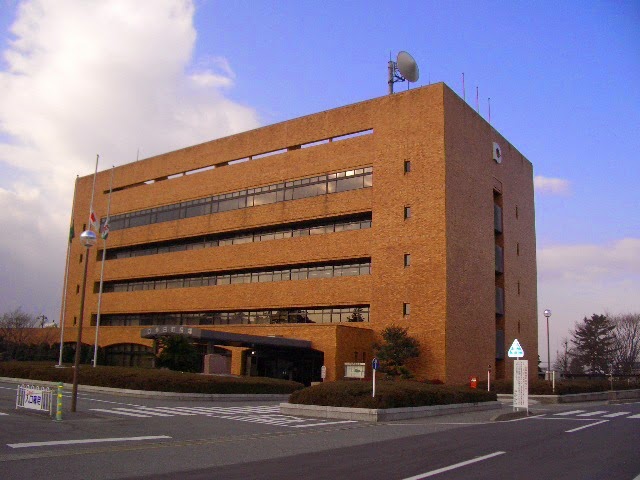 Something that American schools should consider is what they do about cleaning the schools. In Japan they have the children and the teachers clean, including scraping the wheels on desk chairs to be sure there is no sticky gum on the them. If children were responsible for cleaning I would think that they would have more respect for property.

Loudspeakers announce important things like elections are coming, or someone has had a baby.   They most likely will choose 6 am for the announcements so everyone is at home, in bed asleep, and won’t miss the announcement!

Jes was privileged to act as the recycling police a few times in his town.  He had to supervise at 7 am on recycling day the division of 14 categories of recycling.

We ate sushi and some fast food.  My favorite restaurant was “Joyful Restaurant.”  It wasn’t crowded and the food was similar to fast food but better. Hand wipes were always furnished. Even in the fast food restaurants we were furnished with pop up variety wet naps.  We enjoyed cooking our own food at one restaurant where you put the filling and condiments on a griddle and cooked at your table. 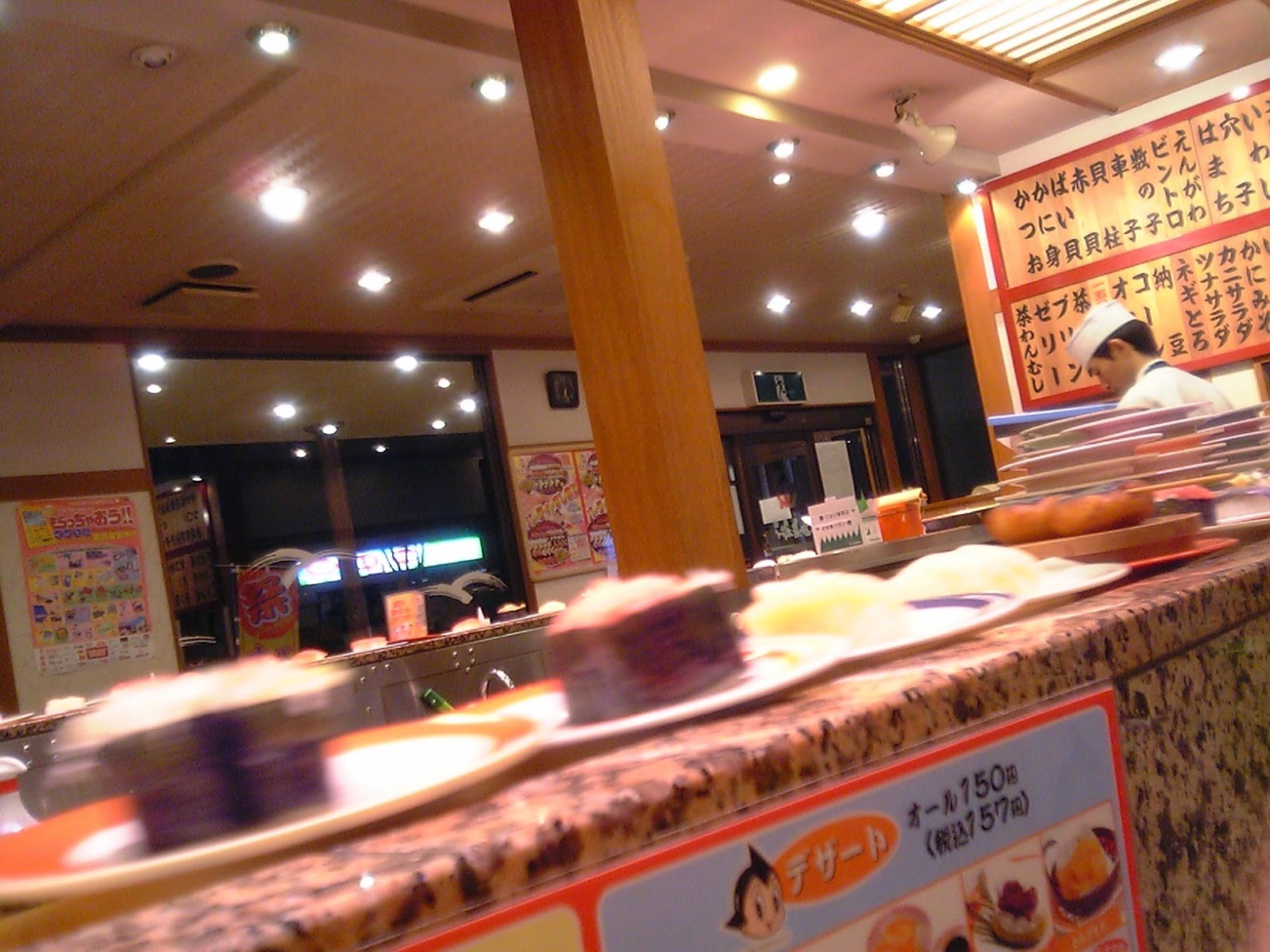 For Christmas we attended the Protestant church Jes had been attending.  The sermon was in Japanese.  We were gifted with homemade cookies.  We enjoyed an Italian dinner later.

Japan has adapted the U.S. custom of Christmas shopping and consumerism, but not the reason for the season—the birth of Christ. IRRASHAIMASSE! (Welcome) is what the employees of the store yell at you to make sure you feel welcome. 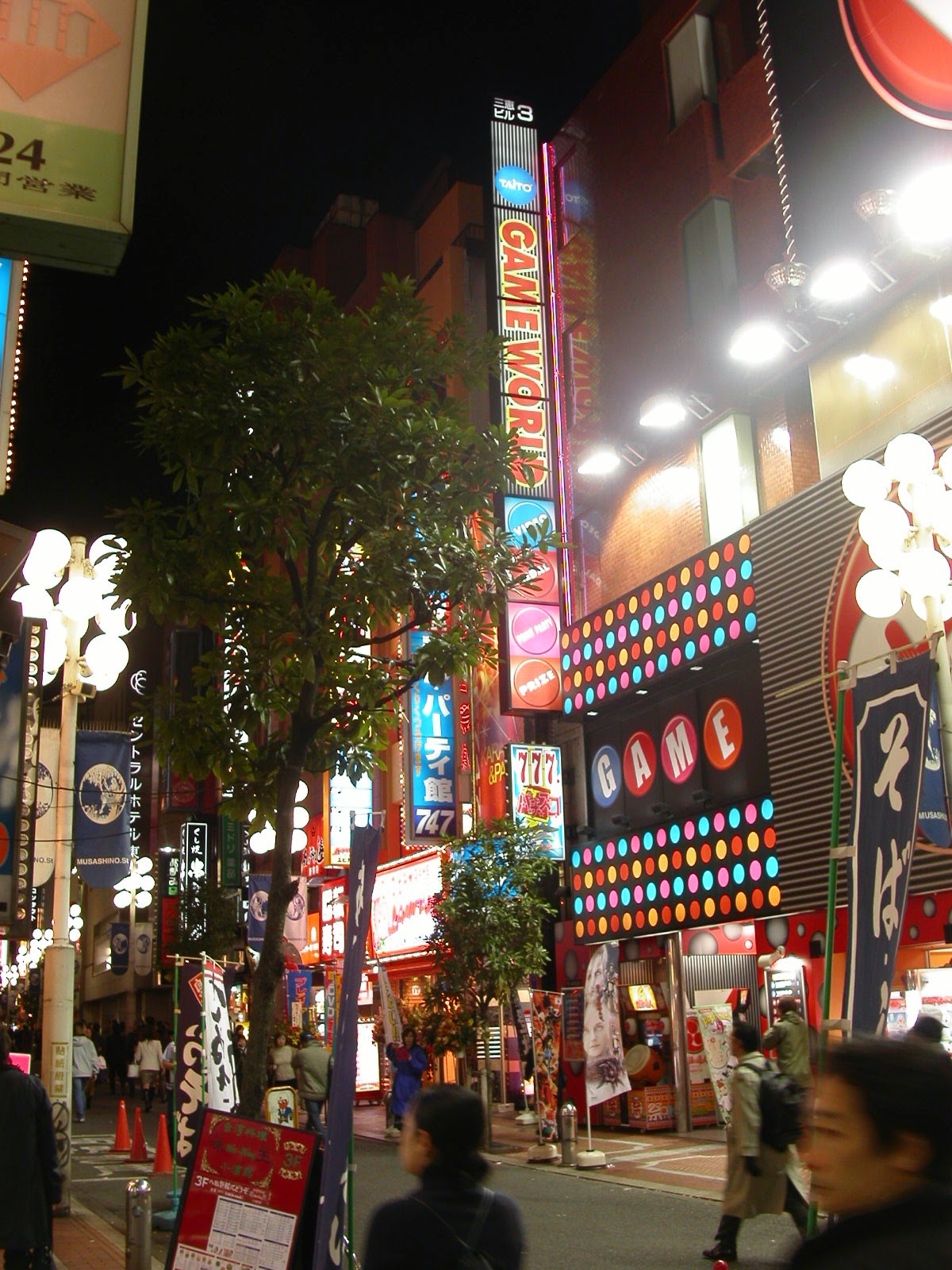 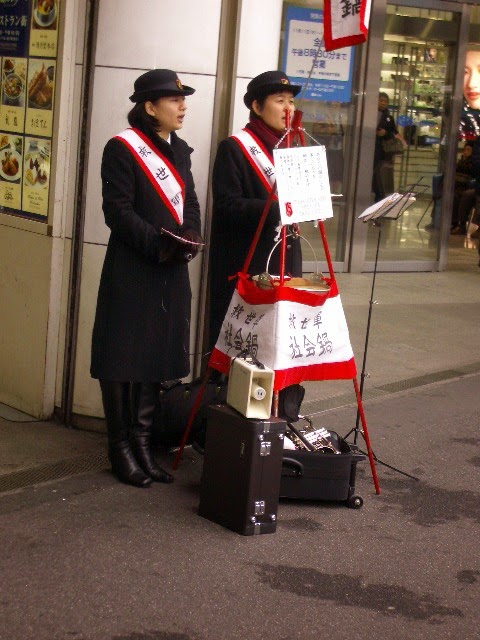 On New Years Eve we joined the town party at the 2 shrines, one Shinto and the other Buddhist.  They were serving hot sake and red beans.  There was a big bonfire.  The principal of the school was there and we talked to him briefly.  I enjoy doing “something” to celebrate on New Year’s Eve because I love the New Year.  Everything is fresh and ready for a new start.  So New Years in Japan was one of the best for me.  The next morning after the celebration everything had been removed.  All that remained was a raked dirt field between the 2 shrines. 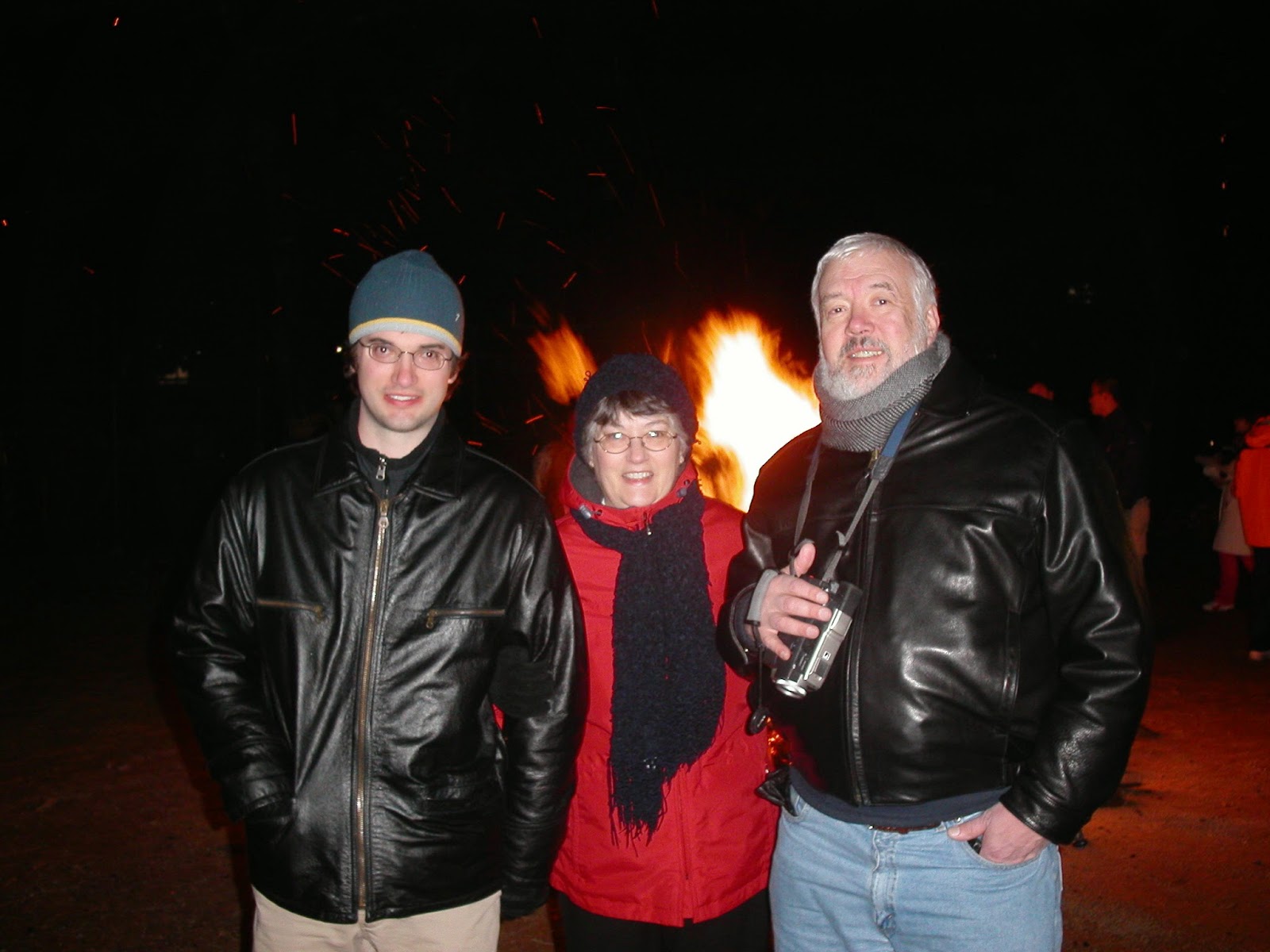 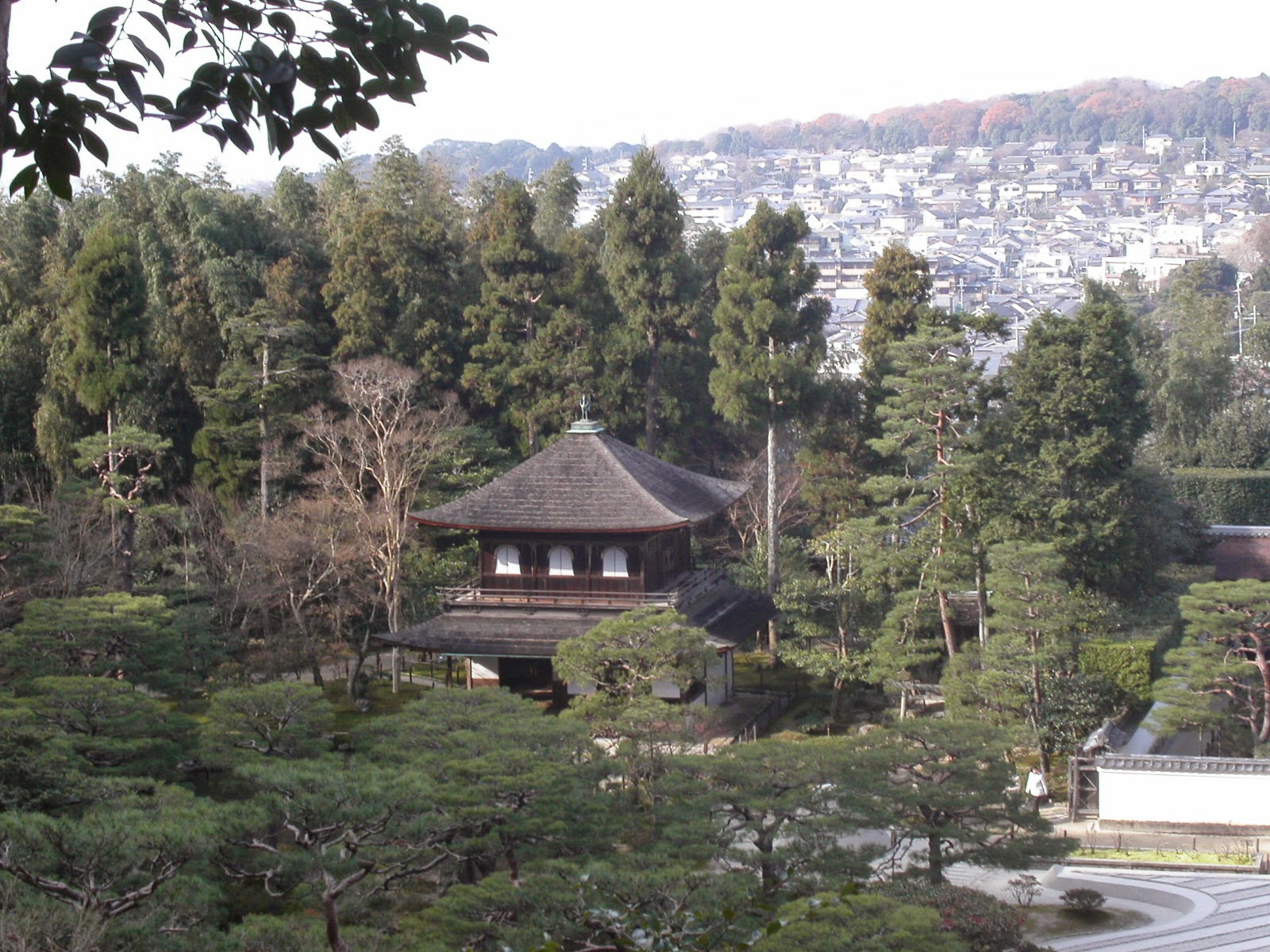 Shrine in Koyto.   Photo by Chris

Of course one must see the castles especially Himeji-jo which was carefully restored in the late 50’s using all traditional techniques.  It differs from many of the castles in Japan nowadays as many are made of concrete. 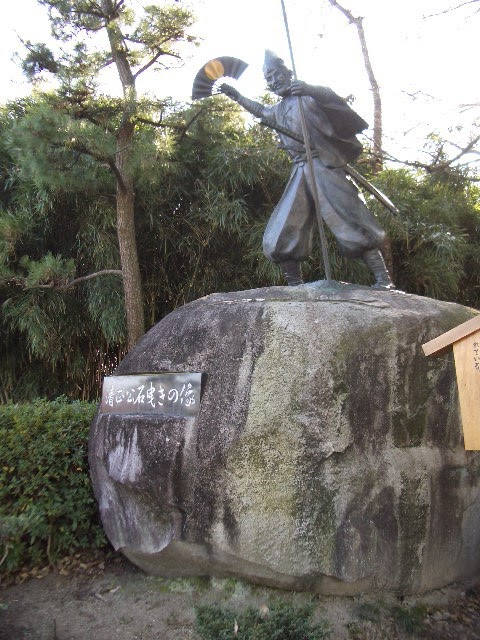 At Nogoya Castle.  Photo by Chris

As a soft American I could never live in Japan, as some places do not have central heating and air conditioning.  My son tells me that most do.  I do like the food including seaweed.  I’m glad I visited as I can relate to others who have lived or traveled there.