Grandpa was a Doer 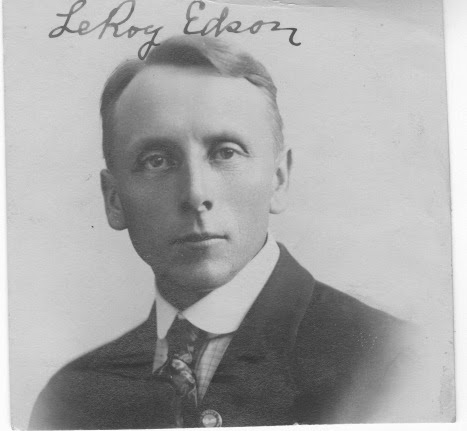 “My idea of Heaven is that in a spiritual form, if we are approved by our Creator, we may spend eternity visiting other worlds, communicating with other humans….” So says Grandpa Edson in his essay “Some Important Events In My Life.”  Now I know why all three of my brothers wanted to go to Mars.  Grandpa started it!  Grandpa was a man of action.  He didn’t want to sit idly by, even after he went to be with Jesus!

Ira Le Roy, or Roy as everyone called him, moved to Spokane in 1910 from a small town in Iowa.  After he lost his sister, Lydia, when he was 10 years of age, to what it sounds like, pneumonia, he came to believe that she saw angels coming to take her to Heaven.  He lost his mother shortly after he finished attending Morningside College in Sioux City, Iowa.  He then decided to put some distance between him and his old hometown.  His other sister, Emma, was already married and away from home.

On his first Sunday in Spokane up on the highest hill he could find overlooking the city he prayed and planned.  His hope was for a wife, home, and job.  He began working for the land office in 1913 and married Grace Slightam in August of that year.

However, I do know that Grandpa did drive Grandma and my aunt Evelyn and my mom to California to pick plums.  It must have been several times. First when the two girls were young and then after Aunt Ruth was born and the two girls were older.  I believe that one time when they went down to CA Aunt Evelyn was about 3 and my mom 2.  After Aunt Evelyn followed a sheep and was missing, and was eventually found, Grandma heard a bird say, “Beat it.” She took the girls and went home to her parents in Spokane. (See Wayne's correction in the comments below.)  The next time they traveled to California, or so I believe, my mom was about 9 and she was holding baby Ruth.  They had an automobile accident and my mom lost her eyebrows and had a scar on her forehead from the accident.

From what my mom told me Grandpa and Grandma made sure the two girls had piano lessons and elocutions lessons.  When Aunt Ruth came along they provided singing lessons for her.  Her singing teacher said that her voice was better than another pupil she had, Patrice Munsel.  Grandma would always sing our favorite song to us “See the sun I sinking in the golden west.”  Grandpa could play the piano and the fiddle by ear.  I believe that my cousin Diana has the violin now.My brother Davy has all the rest of the instruments that my mom saved.

When my mom's 7th grade teacher told her parents that she needed glasses as she couldn't see the black board, Grandpa insisted that if she did eye exercises she wouldn't need glasses.  She did get glasses.  Grandpa had many ideas about exercising and keeping in shape as I understand.

From the newspaper clippings I think that Grandpa retired twice.  First as typist for the Spokane County auditor’s office and then as deputy auditor.  He wasn’t happy in retirement.  His letters to my family reflected upon wanting a third career.  So he took up writing.  As a result he wrote “his story.”  In the Christian community in his day it might have been called his testimony.  As I recall he sent other writings to Readers Digest and always received a rejection letter.  I have done the same and have only been published once.

He built two homes, one in the city and one in the country. He planted a one acre vegetable garden as well as nurturing apple trees and fields of alfalfa and wheat.

He hoped that his story would help all freedom loving people into a fuller and richer life here on earth, and cause them to think of what is in store for them in the life hereafter.