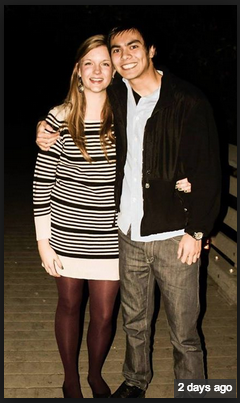 Young man who saved his classmates at SPU June 5, 2014


I have never been acquainted with or been in the area of any one who has been murdered.  But I have lost a sister to cancer.  I know about the pain I suffered and still suffer from her loss.  But I can’t imagine what the families of people who have been shot in mass shootings go through.  How can we as a country deal with such evil?

Of course we have our faith.  It has been demonstrated big time at Seattle Pacific University after the death of one classmate and wounding of two others last Thursday.  Immediately a prayer vigil was scheduled.  Another one followed directly.  (Gifts of thanksgiving and gratefulness to Jon Meiss, who pepper sprayed the perpetrator and took him down, have been pouring in.  Not only has his entire registry for his wedding been completed but also at least $40,000 or more has been donated to his honeymoon fund.  He and his fiancé will be married in 2 weeks. He has requested that anymore donations be made to the 3 who were wounded in the shooting through SPU.)

Another way of coping is through organizing a movement.  John Walsh, after the kidnapping and murder of his small son, started "America’s Most Wanted,” as a way to track down criminals through publicity.   A mother who lost a child to drunk driving created MADD.  Many other speaking events and publications are useful to educate the public on harmful things, such as teen drinking, and how to avoid these things.

The government considers laws that may prevent murder; it tries, convicts criminals, and punishes them. The debate about the right to bear arms is going strong.  Here is a blog that tells of the various conflicts:  http://gawker.com/its-really-hard-to-be-a-good-guy-with-a-gun-1588660306?utm_source=recirculation&utm_medium=recirculation&utm_campaign=tuesdayPM

Doctors and researchers work on finding cures for mental illness.  But now we need prison reform and funding for treatment facilities for the mentally ill.  Jails have become the new insane asylums.  Watch the 4 minute video below:

But the greatest thing that I think about is how Jesus will come back soon, and put everything right.  There will no longer be any evil in this world.  Come quickly Lord Jesus!

I Peter 5:10 After you have suffered for a little while, the God of all grace, who called you to His eternal glory in Christ, will Himself perfect, confirm, strengthen and establish you.