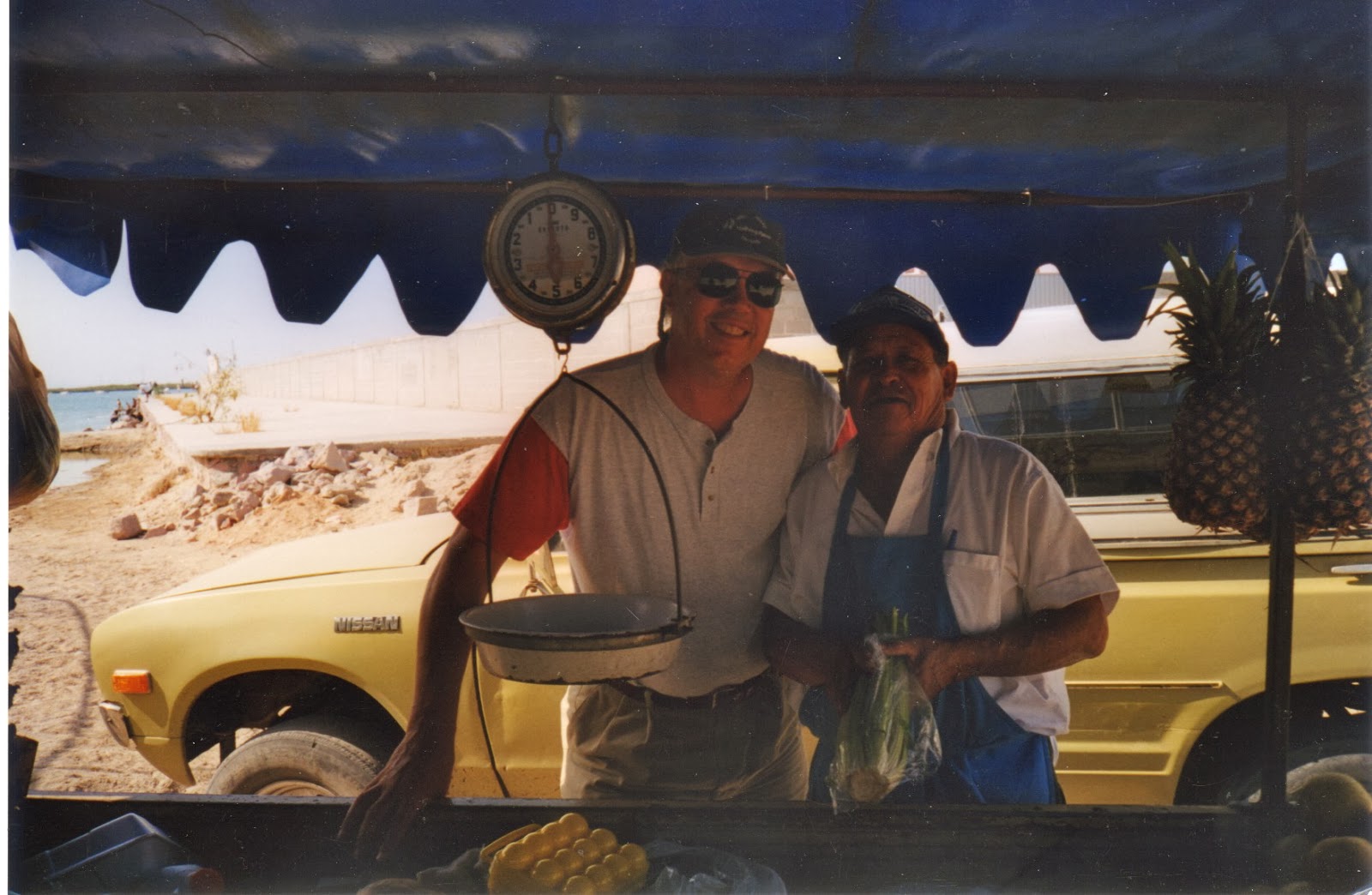 Chris with the fruit and vegetable man who came to Marina De La Paz.

Our church is going through a tough time financially.  We only have a part time pastor and administrative assistant.  We really need full time people.  The church chairman says that we will keep going until we run out of money.  It has been suggested that we borrow money from our denomination to hire a full time pastor.  But doesn’t the Lord provide what we need when we need it?

Our family’s story shows that God does provide what we need.  When our family was  going through some hard economic times I told the Lord that if He wanted us to live in our car—it was paid for—I would be willing to do that.  Chris was working in San Jose, CA, but not making enough to pay for an expensive apartment in the Bay area.  So I had it all planned out how to live in our car.  Our daughter was 11 and living with my parents and attending 6th grade.  Our son was 4 and not in school yet.  I figured I could drive Chris to work and then use the bathrooms there to shower and clean up.  The little guy and I would eat at McDonalds and then spend the day at the library.  But we never had to do that.  Suddenly, through several coincidences, Chris was offered a job with a higher salary in Santa Rosa, CA.  We were able to move farther north where the housing wasn’t so expensive.

But now I’m spoiled.  Would I be able to give up our life style if the Lord wanted me to?  When I go to the store to buy some shampoo I have the choice of large numbers of different brands.  When I go to the grocery store I have bins of fresh fruits, shelves of canned food, and dozens of different kinds of frozen pizza or anything frozen I want.  But recently I’ve noticed that some of the choices have been declining.

It has happened a few times now.  I went to the area where I usually get the brand of shampoo I like.  They had every other kind for problem hair but none for normal hair.  Strange.  Then another time I wanted some Nature Made vitamins and they were all out.  I checked back several times and the product still hadn’t been restocked.  Maybe vitamin companies phase out vitamins that don’t sell well.  Or maybe the transportation of some items has been held up because of weather.  Or maybe America is turning into a third world country.  Maybe we will no longer have a choice of anything we want.  It could happen.

When we lived on our boat in La Paz, Mexico on the Baja we were amazed at the lack of products in the stores.  In the main department store downtown there were wide spaces between washers, dryers, and refrigerators on the appliance floor.  There were only about 2 or 3 different brands.   The clothing department racks were not very full and widely spaced.  (It is a lot different there now 20 years later.) One day I went shopping with a friend from church and she discovered Jockey underpants in stock.  She said, "I need to buy these now as it will be a long time before any more come in."  Then she said, “I love living in La Paz because there is nothing to buy!”  I guess that includes underwear.

When we came back to the states I was overwhelmed at all the stuff in the stores.  It was like a land of milk and honey—a promised land of sorts.  So if the United States is devastated by some disaster or attacked in some way, will we be content with what God provides?  If the Lord asks us to give up our church building will we be willing to do that?  I hope so.  There are always “House Churches.”  Our church pianist has offered her home if this should happen!