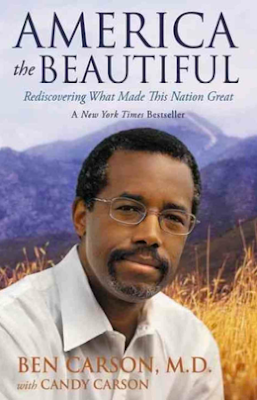 I just finished reading Dr. Ben Carson’s book, “America the Beautiful.”  I noticed that his wife, Candy, helped him to write this book.  Some of the topics included are the history of our nation, the religion of our nation, capitalism, socialism, morality, learning from our mistakes, health care, a nation divided, liberty and justice for all, what’s good about America, and what do we believe and in whom do we trust.  Dr. Carson comes up with many ideas about how we can get out of the healthcare mess, crime mess, national debt mess, and many other plans.  Some I had heard before.

Here are a few of the topics that were new to me in the book:

·      One way of defeating the terrorists is for the United States to become independent from all foreign oil by drilling and using our own oil.  If any country harbors our enemies we sanction them.

·      Likewise the creation of the new Tea Party in 2009 began as a result of passage of the Emergency Economic Stabilization Act of 2008, the American Recovery and Reinvestment Act of 2009, the bailout of several major financial agencies, and talk about dramatic reform of the nation’s health care system.  Then February 19, 2009, a business news editor on CNBC by the name of Rick Santelli criticized the government for bailing out underwater mortgages: http://www.youtube.com/watch?v=VgJ30bihdy8

·      Carson ignored requests when speaking in various places like Columbine High School or the National Prayer Breakfast to not speak about God or Jesus.  He disregarded those requests and spoke of his faith.  He was applauded wholeheartedly.

Dr. Carson is an insightful man of faith.  He presents a fair and balanced view of the United States.  He encourages all to work hard and overcome their problems by taking responsibility and not making excuses.  I wish he were the President of the U.S.!