Are You Lonely Tonight? 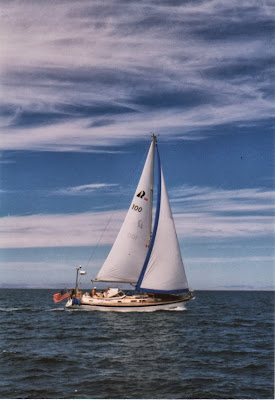 Sailing Flyaway to La Paz, Baja, Mexico.  My mom called me her little flyaway when I ran away from home when I was 18 months old.

“Blast From the Past” is one of my favorite movies from 1999 (and yes, there are some racy parts.) I identify with Helen the housewife and mother who is imprisoned below ground in a bomb shelter for 35 years with her husband and son.  (She took up drinking.  I empathize!) Now don’t get me wrong, husbands and sons are good company, but for some reason I crave the company of women at times.  Maybe it is because I enjoyed being with my mom and sister or maybe it is because I have more in common with women. There is really no reason for this but when I have no women in my life, I feel lonely.  I do enjoy the company of men though.  They are such fascinating creatures.

So my sad story began when my husband and I took off sailing our boat from Seattle to Mexico.  We were pretty much confined to the boat, first for nine days to San Diego, and then for eight day down the Baja, past Cabo, and up into the Sea of Cortez to La Paz.

On the first leg, when we arrived in San Diego, I was yearning for information from home.  We had no cell phone; it was impossible to receive letters from home, as we had no address, and Wi Fi was not available.  I thought about carrier pigeons but instead opted for a desperate move, and purchased a something or other that would work on a pay phone to send and receive e-mail.  Can’t remember if we ever made a connection.  Then we got satellite e-mail which charged big $ for each character.  You didn’t pay by word you paid by letter!  We made up a text shorthand and this was before texting! 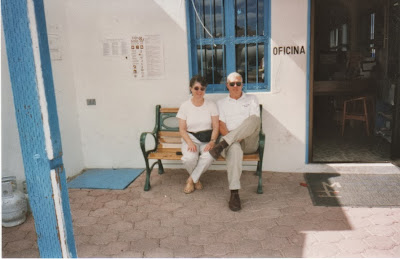 Marina office.  The people were a great help to us.

Next, after we arrived in La Paz, we learned a ham operator in southern California would beam his antennae toward Honduras so that the missionaries could communicate with ham operators in the United States.  The cruisers in La Paz competed to get a signal so we could send ham e-mail.  We would wait until the ham operator would swing his antennae in our direction and then it would be a feeding frenzy to get connected. Not everyone could get on at once.  I had one friend who would send me e-mail messages from home.  Everything she wrote would be streamed so that all the ham operators could read everything she wrote.  She would send me her tea column that she was writing for a newspaper to critique.  I’ll bet those ham operators learned more than they ever wanted to about tea. 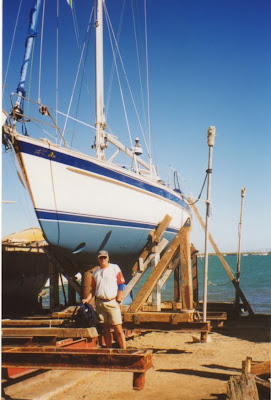 Heat and salt water are tough on boats.  We were constantly having work done on Flyaway.

The antenna for our ham set was attached to the backstay of our boat.  One crewmember, who crewed for us for a short time, accused me of trying to kill him.  He was afraid if he touched the backstay when I was on the ham e-mail that he would be electrocuted.  Other crewmembers saw the wild look in my eyes and steered clear of any comment about me being on e-mail all of the time.

So how should one deal with loneliness?  Maybe what God was trying to tell me during this time was that He is sufficient for me.  I don’t need to depend on other people for company.  If I would just read the Word and pray, God is always there.  He has promised that He will never leave me or forsake me.  But He has also promised that if we delight ourselves in Him, He will give us the desires of our hearts.  Shortly after we arrived in La Paz I was made aware of a missionary who was willing to preach sermons in English on Sunday morning before the Spanish language church.  I met a few other cruisers and some ex pat Americans that way.  Someone started a writing club and we would meet weekly to critique each other’s writing.  It was a stretching experience and I’m grateful for all that God had provided—but I was glad to get home to the good old U.S. of A.!