THE REST OF THE STORY 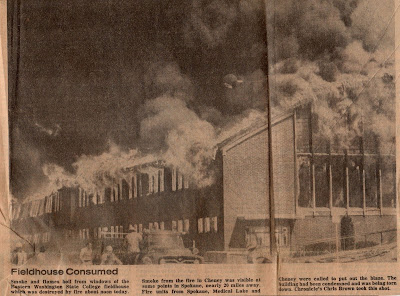 Chris shot the above picture for the Spokane Daily Chronicle in April of 1977.  Here is the rest of the story as told by Chris:

There is a story behind this picture.

Early in the day, there had been an armed bank robbery in the Cheney area and the robbers escaped. There was a massive police search for these two guys around the back roads of Cheney. I was out there as a Chronicle photographer chasing around also. I was approaching my noon deadline for the final edition and was heading back into Cheney with the photos I had, mostly of a bunch of police cars (rather boring).

Anyway, as I approached Cheney I saw a huge plume of smoke rising from the campus. I followed the smoke and came upon the above scene. I jumped out of my news car and took a few shots of the fire and took off for Spokane. I was only about 15 minutes to deadline, but it could be pushed for major news. I called the city desk and told them to block out a six-column front page about the same depth and I told them what I had.

Since I knew all the police, including State Patrol and even Spokane City police were out chasing robbers still (I had a police scanner) I drove into the city never going below 80 MPH. I dropped the car off in our garage and ran to the darkroom and put the film in the chemicals. A few minutes later I saw I had the above shot, still a negative. I called the desk and said to give me about 5 more minutes. I put the wet negative in the enlarger and made the print, processed it, and took it down to the newsroom still damp.

The desk took the picture sent it to engraving, then onto the production. We made the evening edition. Not bad since I took the picture in Cheney not more than 30 minutes before the presses ran. Oh, the fire was caused by a welder cutting down some old metal beams, but that old WW2 wood was just tinder.