TO WATCH OR NOT TO WATCH THAT IS THE QUESTION 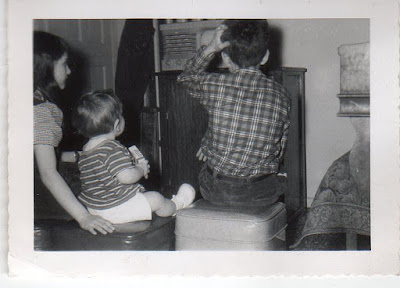 My aunt Evelyn did not believe that we had a 7" TV.  Here we are watching it.  I think this is in Alexandria at our Jefferson Manor house. Evy is sitting next to Davy and Jay is on the right.

My dad liked to watch TV.  It was a natural tranquilizer for him. My mom hated TV.  She would rather be reading.  The following, I think, is the story of why we had a TV before anybody else in Fairbanks, Alaska:

We lived in California in 1947.  California had TV stations at that time.  Apparently my dad purchased a 7" TV.  I appeared on the Howdy Doody TV show with my Brownie Troop. My mom watched the show and she said that they showed a close up of me.

Then when we arrived in Alaska in 1950 there were no TV broadcasting stations.  We switched back to listening to the radio. Two years later we moved to Virginia.  In 1952 in Virginia there was at least one TV broadcast station.  We watched "Captain Video" and enjoyed it very much.  I remember one time two neighbors, Beverly Barrett and Rita Raybold came over to ask me to come out and play.  I turned them down so I could watch "my show."  After that I did go out and play with them.  Later I dressed the neighbors and Evy up in old costumes of mine and presented recitals. 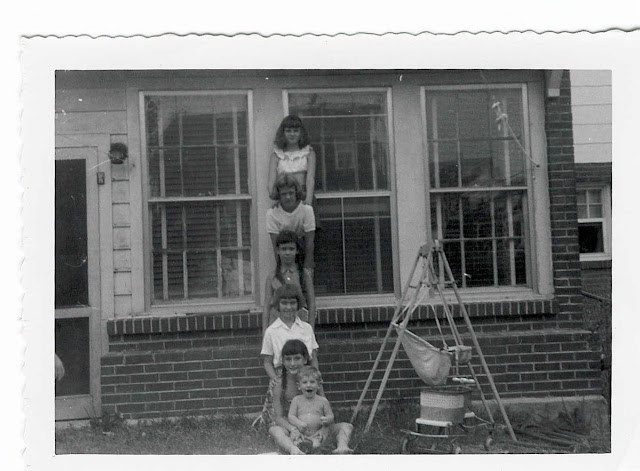 Bottom to top Davy, me, Beverly, Rita, and 2 more I don't remember. 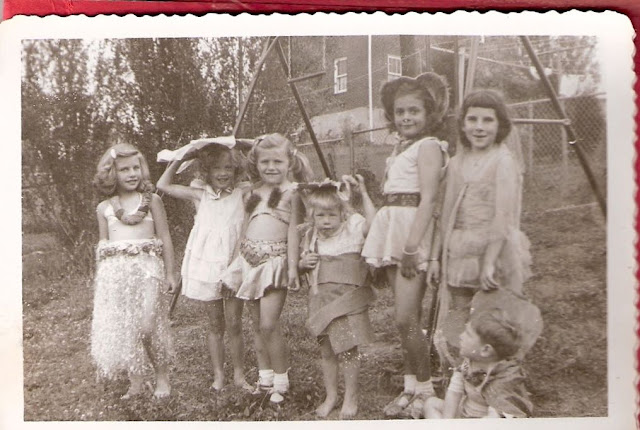 I don't remember the names of those five in this picture.  On the right is Evy, Davy sitting below.

Jay watched cartoons.  I'm not sure how Evy, Davy, or Wayne felt about TV but I know Jay and I enjoyed it like our dad. (Jennifer let me know that Evy liked Seinfeld.  She also liked Mission Impossible as I recall.) My dad and I would bet on how many times Mannix got hit on the head during the Mannix show.  That was an enjoyable dad/daughter time for us. I doubt my mom ever watched the show.  Sarah reminded me that she watched and enjoyed Lawrence Welk.

Now Chris and I  have cable TV.  We have 24 hour coverage.  I have at least 2 Christian friends who do not watch cable news. I am considering following their examples.  Here is a blog which asks some interesting questions to consider about cable news.

Here is a You Tube of Springsteen's song "57 Channels (And Nothin' On).