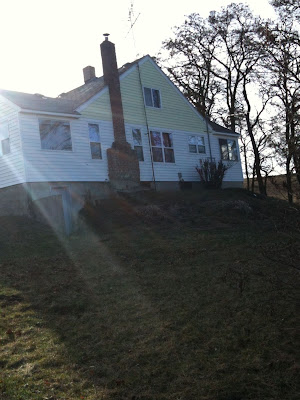 One of the houses Grandpa built

Scotch, Irish, Dutch, and Yankee--that is what my grandfather, Ira LeRoy, my mother's father, told us about our ancestry.  We have been able to find some Scotch, Dutch, and Yankee but have not been able to trace any Irish ancestors.  My grandmother, Grace Belle,  told us to just mark our ancestry as--English.  After all we can trace our family lines back to England on both sides.

My mom's parents both started life out in Iowa and both ended up in Spokane, WA.  Grandma arrived in 1884 when she was just three years old.  Her family is considered a pioneer family.  Grandpa arrived in 1910 when he was about twenty-nine.

Grandpa worked at various jobs while he was in school before coming to Spokane. 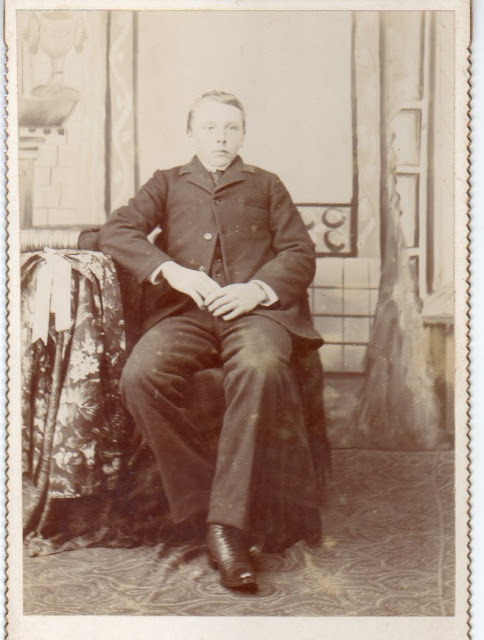 Grandpa as a young man

I don't know what the occasion was for these photos of Grandma and Grandpa.  Maybe these were high school graduation pictures. 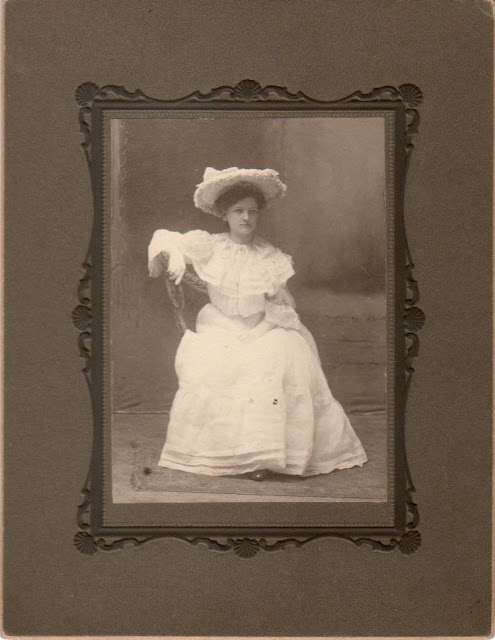 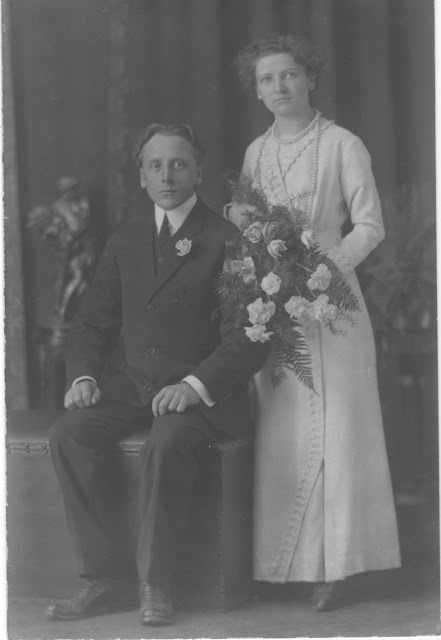 They traveled to Seaside, Oregon for their honeymoon.  Grandpa invented selfies.  He attached a string to the shutter of the camera and took their pictures. 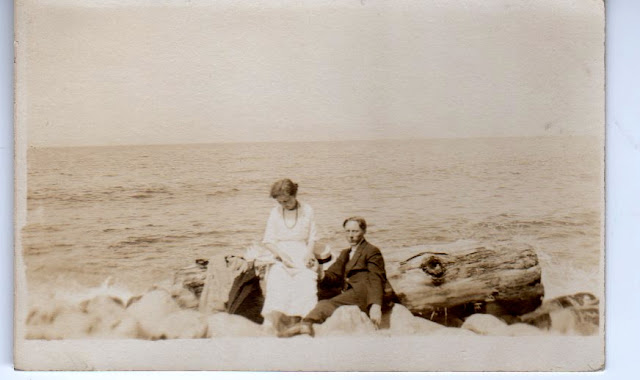 By 1917 they had two daughters.  Their last daughter was born 9 years later. 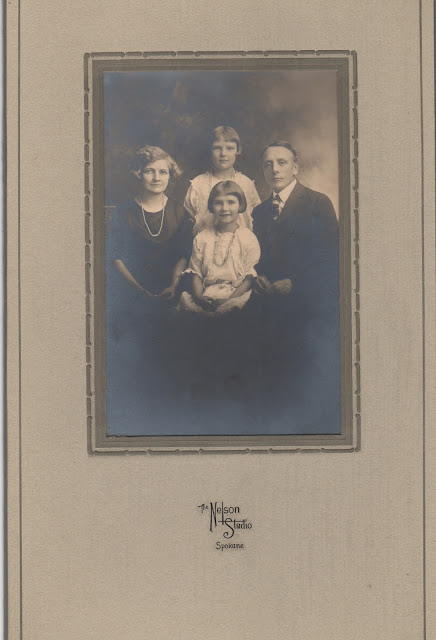 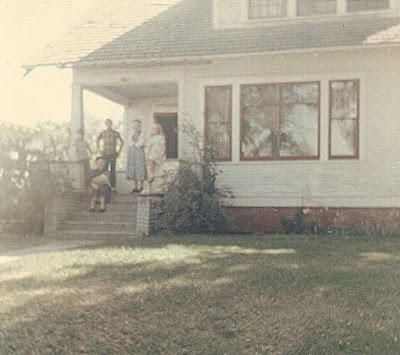 This was the house in town that Grandpa built. Photo taken in 1967.

All three daughters moved to far off places because of their husband's jobs.  It was difficult to come home for reunions but they persisted and were able to get together over the years. 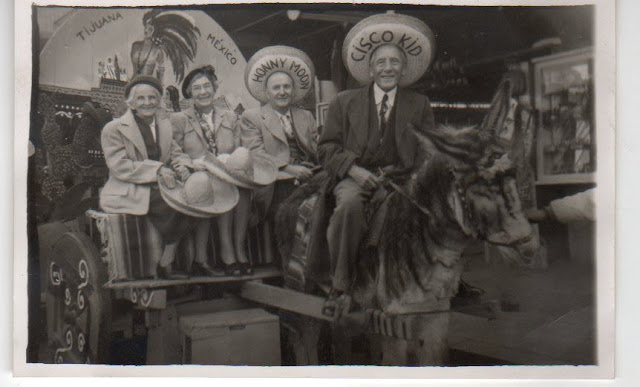 Grandma and Grandpa traveled to Mexico about 1940 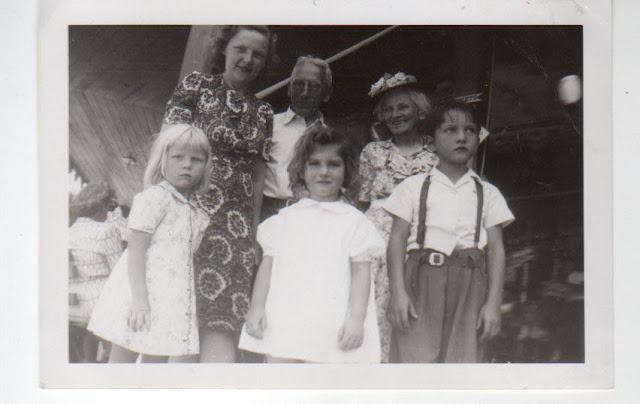 Grandma and Grandpa along with Aunt Evelyn and Dorothy visiting in CA.about 1945 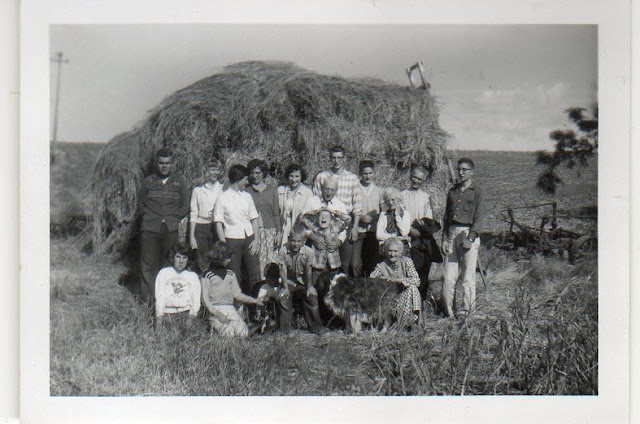 Grandma and Grandpa with more family in about 1952 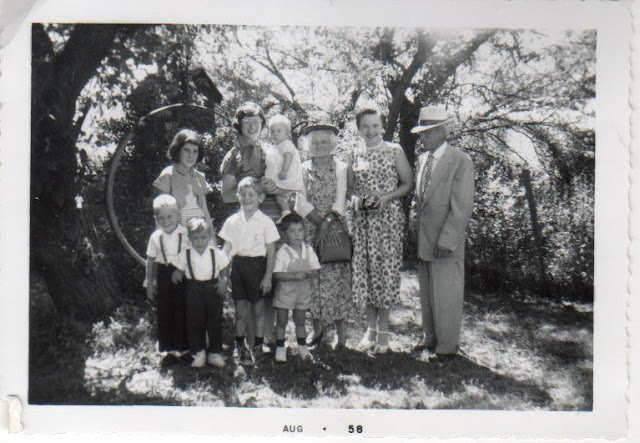 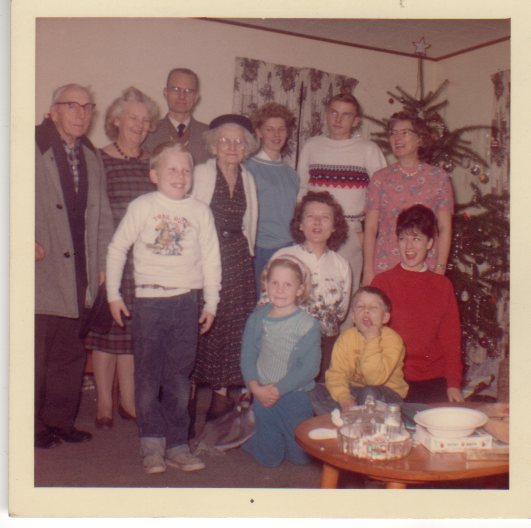 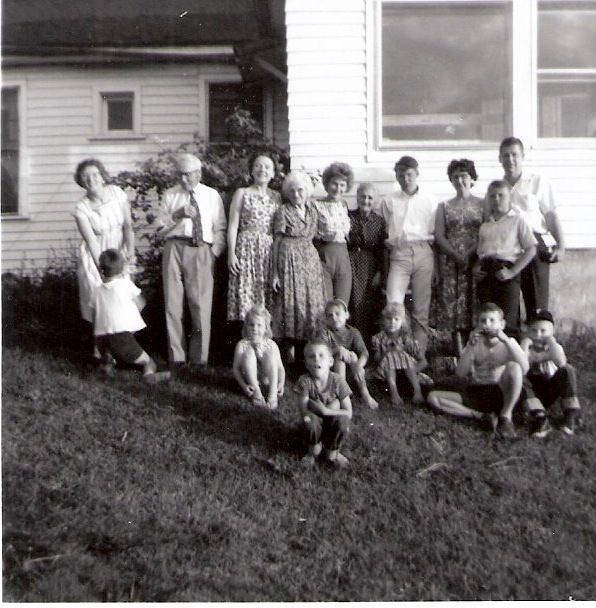 They celebrated their 50th wedding anniversary 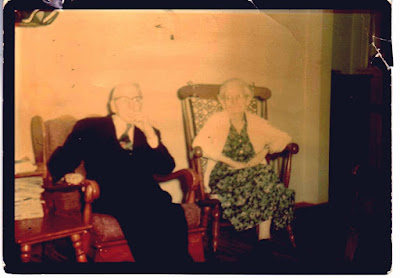 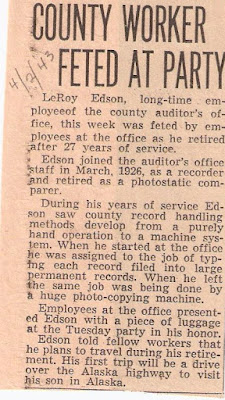 Grandpa built two homes for his family.  He farmed 15 acres of wheat and an acre truck garden. He could play the fiddle by ear.  He taught his girls to type. He made sure his girls had private lessons in elocution and piano.  Aunt Ruth took voice lessons to hone her exceptional talent. Grandpa worked on developing a new strain of pop corn. 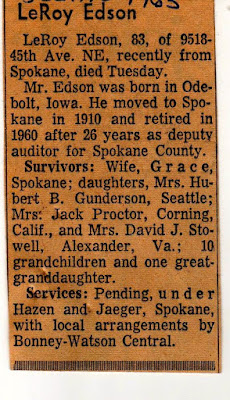 Grandma was always willing to cook us a big meal with all of the garden fresh vegetables and a fresh chicken or rabbit.  We could count on her to have a chilled watermelon for dessert.  Grandma was a wonderful gardener using organic techniques like planting marigolds to keep away the bugs.  She put wooden stakes in the ground with a tin can over each stake.  Each morning she would take a kettle of boiling water, lift the can, and pore boiling water on the earwigs.  Aunt Evelyn said that she planted 1/3 of the garden for the bugs, 1/3 for the family, and 1/3 to sell.

We could count on her for a song.  We loved driving home from Spokane after a day in the city because she would sing "See the sun is sinking in the golden west." Below are the words as we remember them: 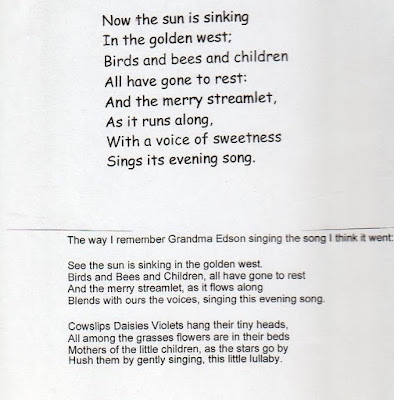 I loved my times on the farm whether it was sleeping in the downstairs bedroom with several beds and usually a crib.  Or sometimes beds would be put in the attic for sleeping dorm style.  Or sleeping until noon in the sun on the sun porch off of the living room. Uncle Beanie would take us on long walks to the mailboxes, dump, or apple trees across the road.  I especially liked drinking cold water out of the well across the road.  We used the rusted tin cup left there. The water tasted like pure spring water into which a little rust had been mixed.

Grandma had a pain in her toe.  I kept taking her to the doctor but all he would do was to give her pain pills.  She could not tolerate them so she didn't take them.  She was admitted to the hospital by a podiatrist.  She had gangrene.  She died there.  She was 88.  Below is the obit:

Some Important Events in my Life--by Grandpa
Page 2 is missing the last sentence.  If I find another copy of this essay I will rescan that page. 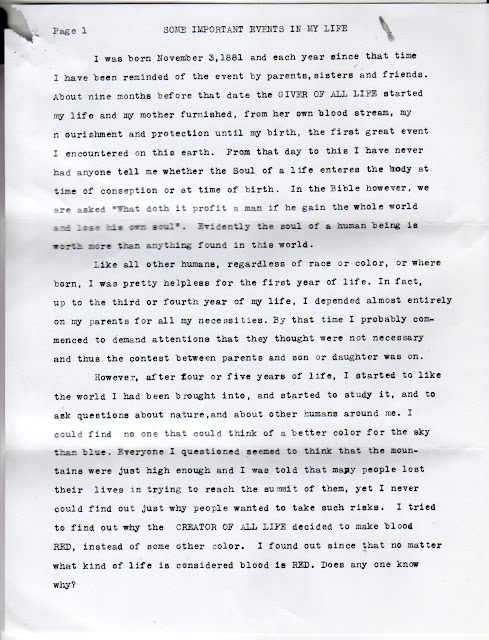 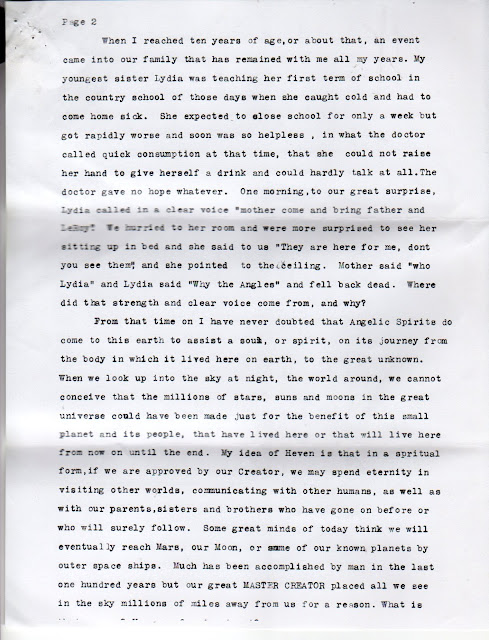 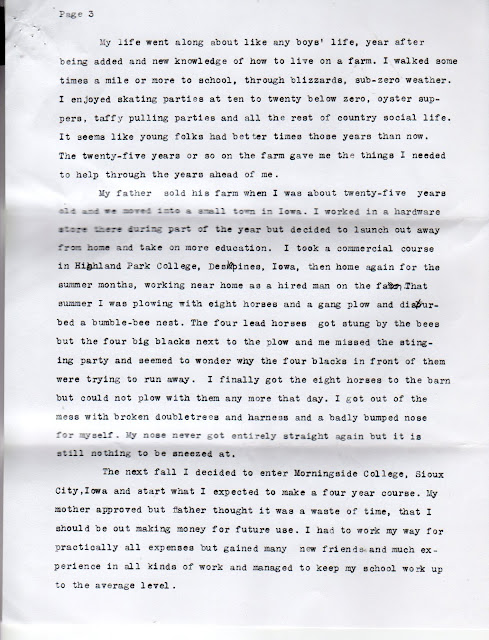 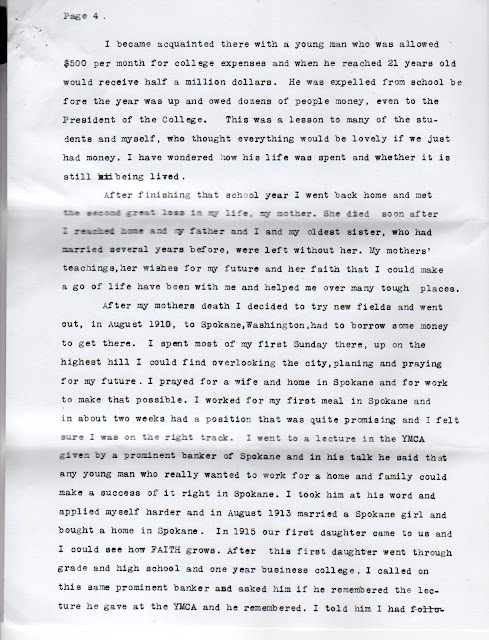 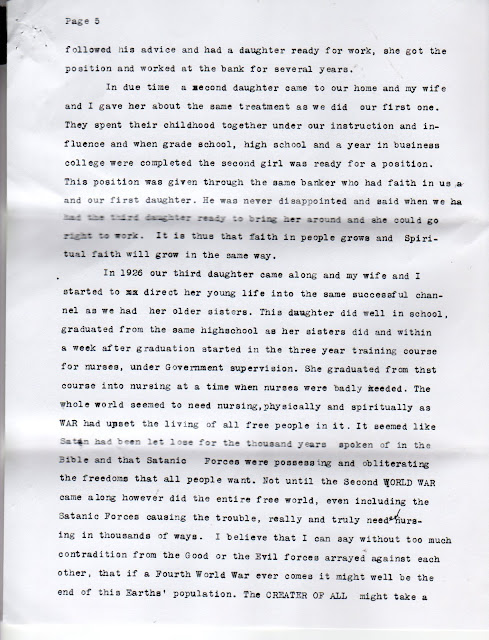 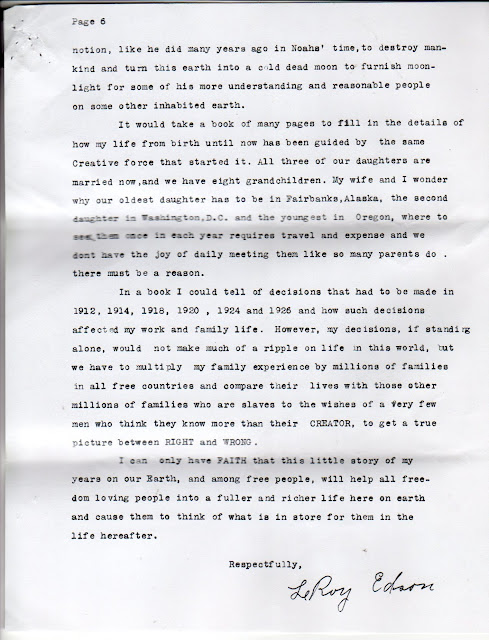