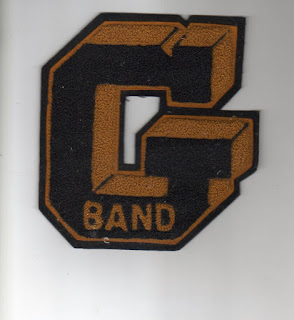 My brother, Jay, lettered in band at Groveton High School

My cousin, Mark, said that he liked the blogs I wrote about the family very much.  So instead of writing about “The Benedict Option” by Rod Dreher, or how God has been kicked out of America, or the terror attack in London, or The President hosting 68 countries in Washington D.C. for a summit on defeating ISIS, I will write about the unexpected findings about my brother, Jay, and a few cousins, as I’ve sorted through all the boxes that my mom has saved over the years. 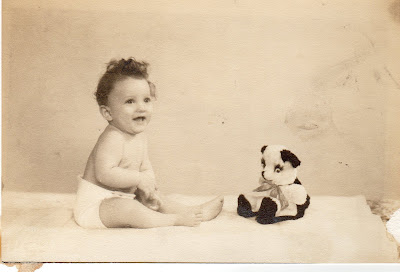 First of all, Jay was a very cute little boy.  He was born in Spokane, WA in November of 1940.  He was named Jay Leroy after my dad, David Jay, and my grandfather on my mother’s side, Leroy. 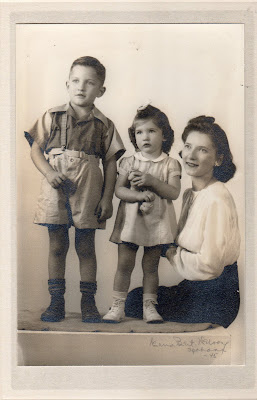 Jay, me, Mom. I was probably unhappy because I had to wear a dress

From there we moved to Santa Monica, CA. where I was born in 1943.  Jay was very sweet to me.  I admired him and wore all his hand me down clothes because I wanted to be a boy like he was.  After our move to Burbank, where our sister, Evy, was born in 1947, we moved to Fairbanks, Alaska.  In California we attended Edison School where Jay was on the Safety Committee. 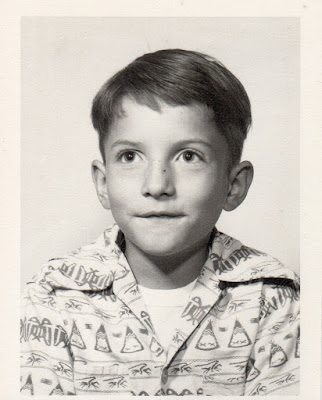 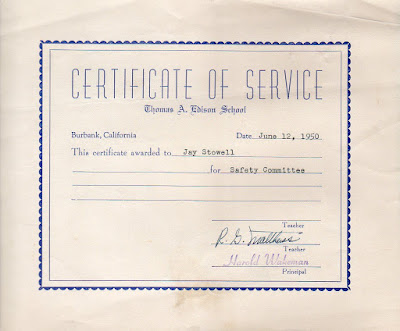 In Fairbanks Jay was involved in Scouts and had a paper route for the Fairbanks newspaper, which was owned by a Snedden cousin.  Jay saved his money and bought himself a 22 rifle and a bicycle.  I used to borrow his bicycle or my mom’s bicycle.  Our next to the youngest brother, Davy, was born in Fairbanks in 1952.  Shortly after, we moved to Virginia. 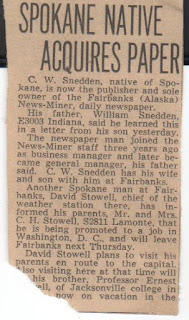 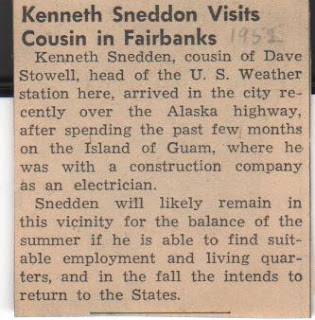 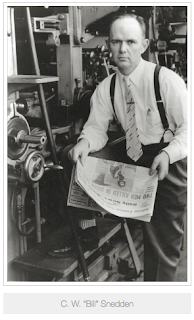 Below I have attached an e-mail I received years ago about CW.

In 1953 we had our picture taken with Santa. 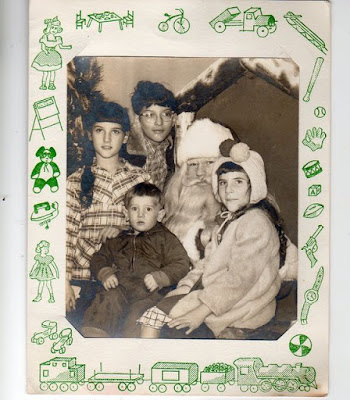 In 1954, Jay, finished 7th grade at Mt. Eagle elementary.  We lived in Jefferson Manor and attended Calvary Presbyterian Church.  He was apparently popular in his class and a nice write up about what he would be doing in 10 year included a rocket! 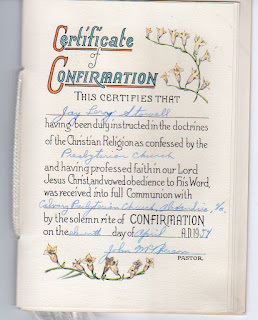 It was the summer of 1956 when our youngest bother, Wayne, was born.  That summer Jay was given an opportunity through our Aunt Emily and Uncle Ernie to travel to Mexico and live with a family there.  (I’ll attach a letter he wrote home telling of his experiences at the end of the blog. At the same time I took off for Eau Claire, Wisconsin, to visit with cousins Kit and Rinda, and Aunt Emily and Uncle Ernie.  I rode along with them to Spokane and spent the summer on my grandparent’s farm. 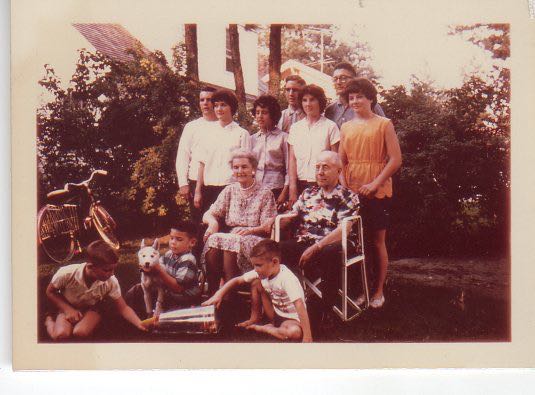 I believe it was the following summer that we visited Disney Land.  Jay was kind enough to drive me on one of the rides, as I was too frightened to drive alone.  (I was intimidated by driving until I was 23. Chris insisted that I get my driver’s license then.) 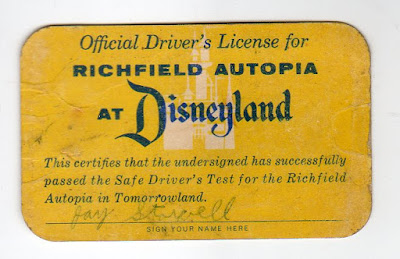 Jay enjoyed attending youth group and Youth for Christ. He lettered in the Groveton High School  band.  My high regard for Jay remained with me until I turned 14.  Then I didn’t claim him as my brother again until I attended college at EWU and was unable to balance my checkbook.  He was very kind to help me. During college he worked at various jobs.  I'll add more about that when I find the info. 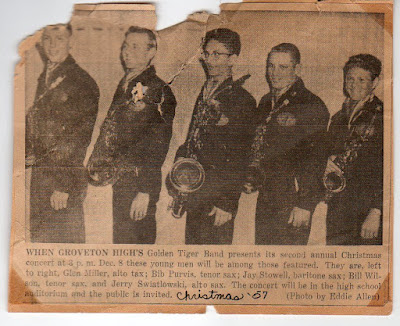 After being graduated from Groveton High School in 1959 he attended Eastern Washington University and received a Bachelors in 1963.  Taking our grandfather on our father’s side advice, he joined the Army.  After being stationed in Taipei, Taiwan, (where he learned Chinese and could speak it 30 years later) he returned home and began attending Miami Bible College.  He was hired as a radio engineer for Billy Graham and through his broadcasting job met and married Martha.  They were married for 30 years.  She passed away in 2004 and he followed in 2005. 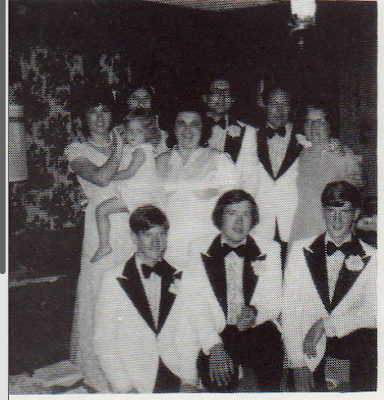 This picture was photoshopped before it was possible.  I hope to find a better picture as I continue to sort!
Front row-Davy, Chris, Wayne. Middle row Roberta, Heather, Martha.  Back row Evy, Jay, Dad, Mom

Below is the letter Jay wrote home from Mexico.  We were very fortunate to have an intact family through the years and I thank God for all He has done. 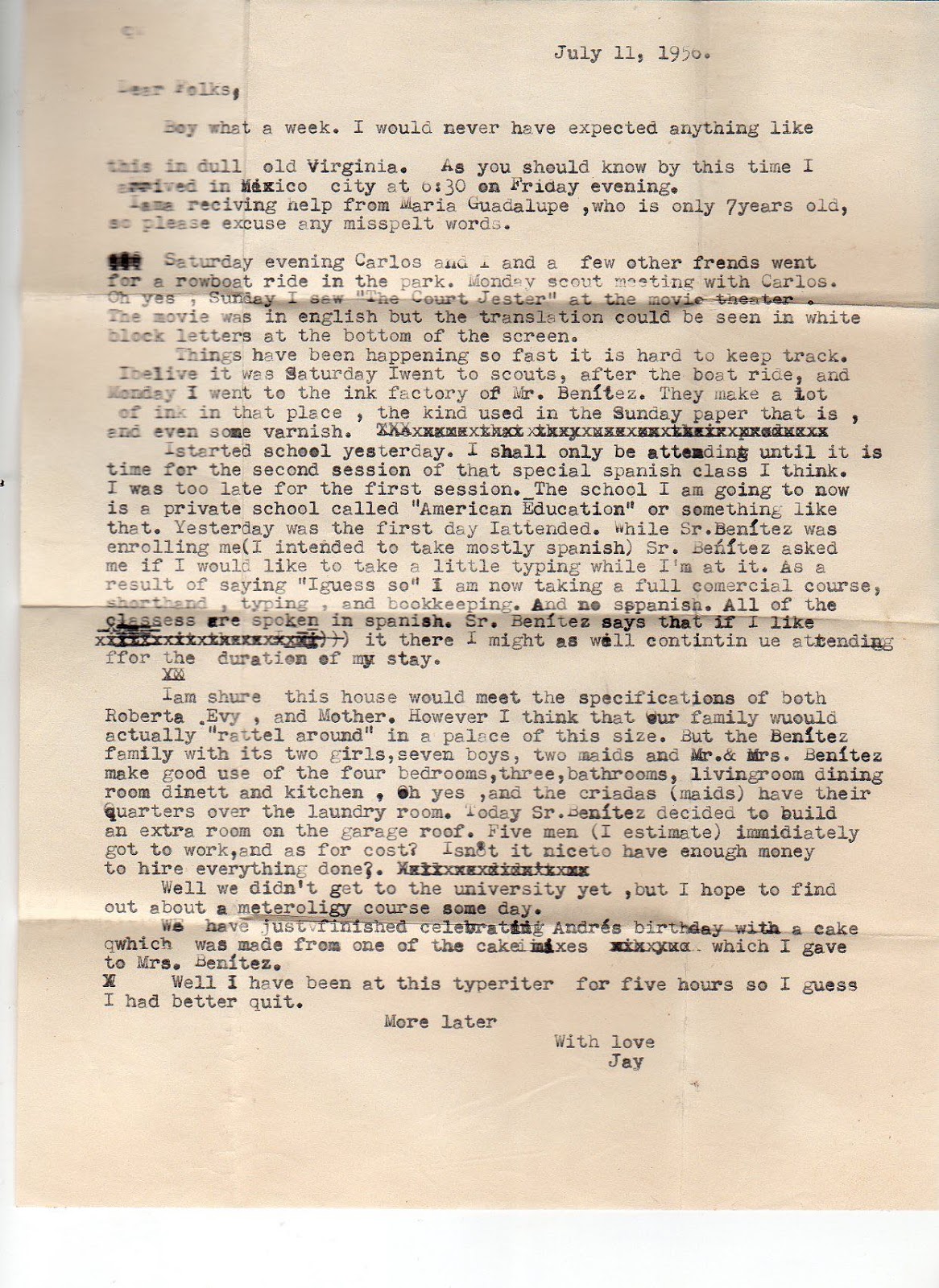 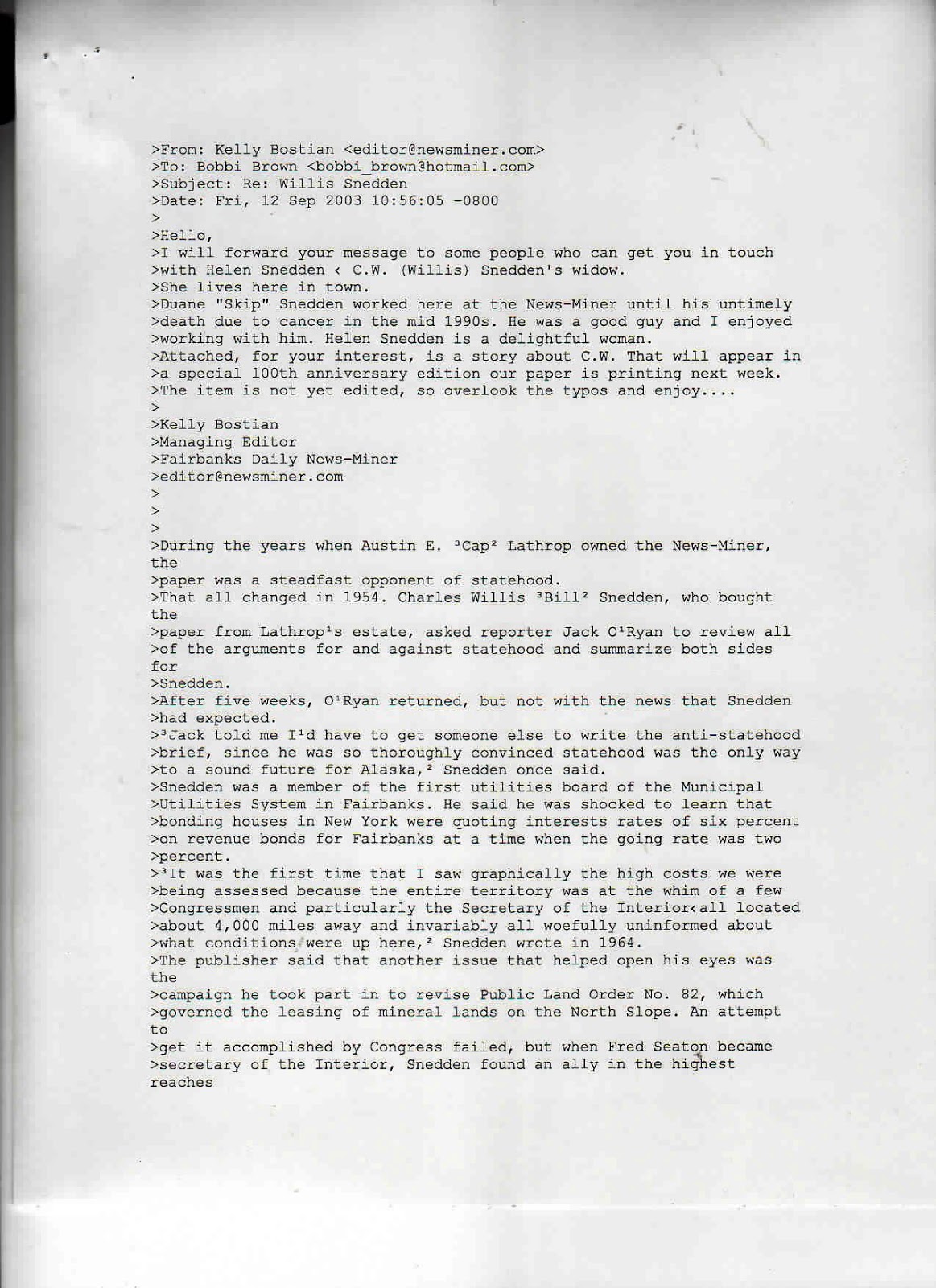 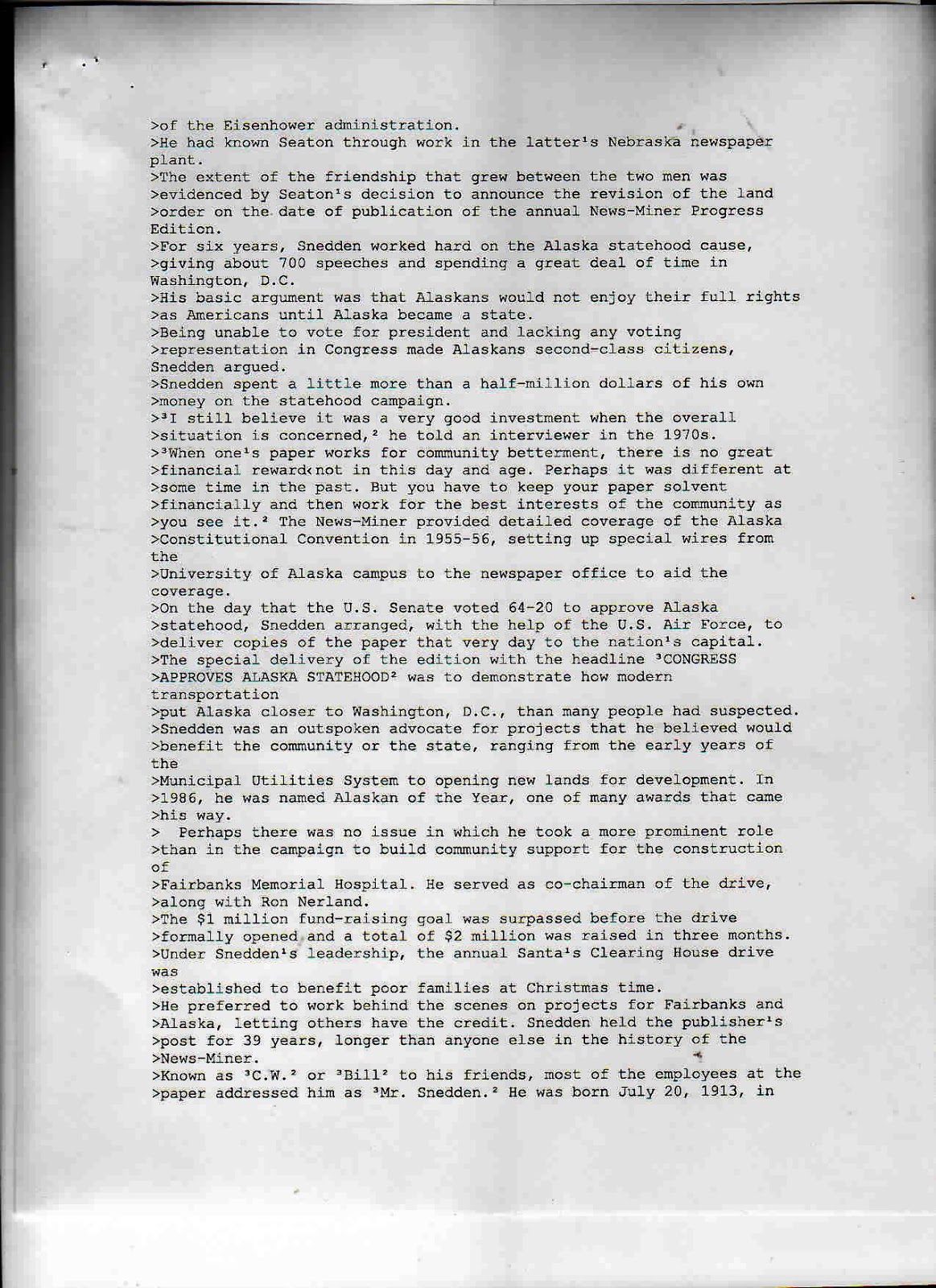 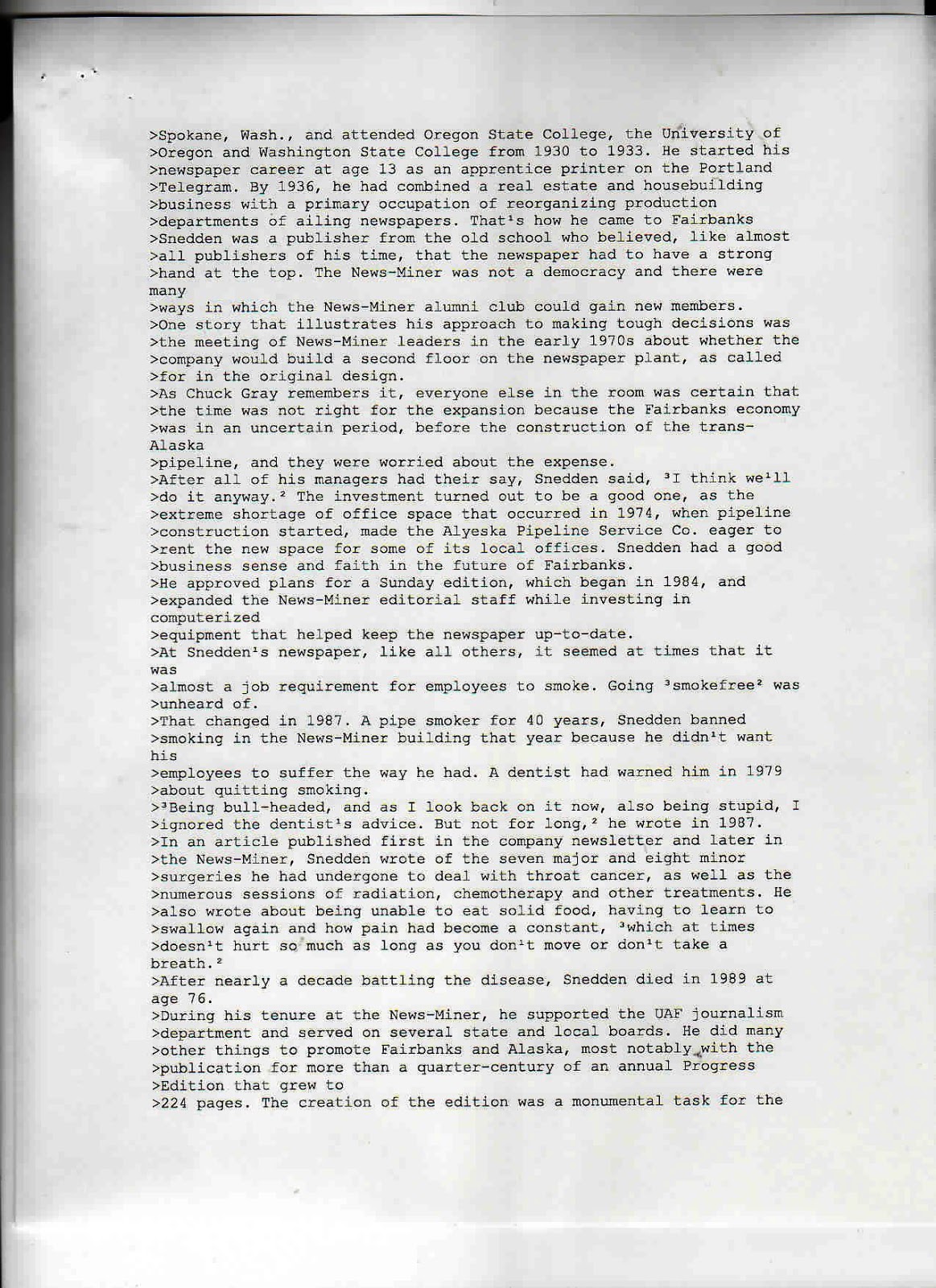 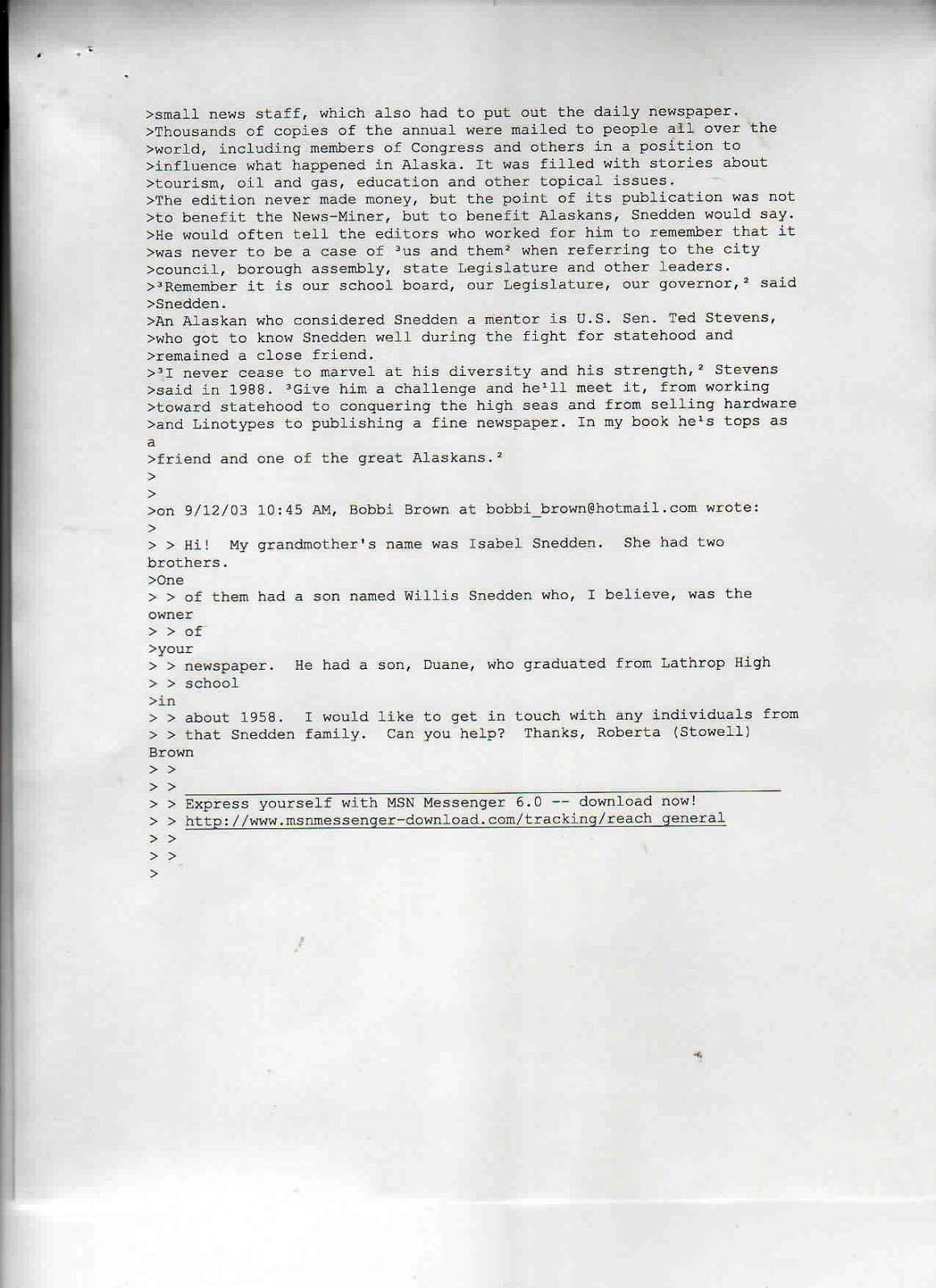