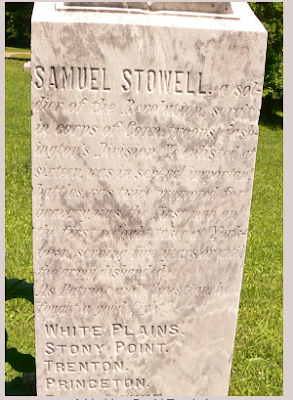 Here is a photo of the grave marker for my great, great grandfather Samuel Stowell who fought in the American Revolution.  He left quite a legacy.

We are learning about “Legacy” at church--what will you be remembered for after you are gone?  Our church is twenty years old and our legacy so far is that we are a church planting church.  There have been at least 17 churches planted within that time.

My parents and grandparents left letters they had written or received for us to explore.  Slowly their legacy of faith and good works is emerging as we read through those that are left to us.


Chris and I just saw the movie “ Hidden Figures.”  Those women had the right idea— educate yourself above and beyond anybody else,  pick your battles and you will succeed. They did not participate in the protests in 1961. They left a legacy of faith and achievement to us.

The history below was sent to me by  a college classmate, Marcene, who was co-owner with her husband of the pharmacy in Dayton, WA:

HISTORY:
Susan Be Anthony was born Feb. 15, 1820 in an age when woman were considered inferior to men.  Many restaurants had signs that said “No females allowed.”  Woman could not hold most jobs nor public office, or even vote.  Anthony spent most of her life trying to right those injustices.       Marcene’s note:   In the history of the Elk Drug of Dayton  (the oldest continuing drug store,1889, in the state of Washington), there is a reference to an early pharmacy in Starbuck, WA., which is a small community near by.  The note says that the   pharmacy started in Starbuck at about the same time as the Elk Drug but the druggist was a woman.  The ladies of Starbuck didn’t trust her so she went out of business.   Worse than that, at the annual state meeting of pharmacists held after the turn of the century, it was proposed that more ladies be admitted to the profession.  The protest was loud and clear. . . The claim was that woman did not allow smoking behind the pharmacy counter, they constantly complained of the mess, and they insisted upon good records.


Once again, women picked their battles and  educated themselves.  This is from a high school classmate—“ You would be most interested to hear about studies done about women physicians (med school entries are half women now). Women are found to have more successful results and fewer complications than men.”

While thinking about "Legacy" I heard about the letter below that Abraham Lincoln had written.  This clearly defines his legacy.  He was born in February so we celebrate President's Day each year with a day off.  He left a great legacy of many wonderful addresses and letters and of course the preservation of the union.  Below is one letter he wrote to Eliza Gurney.  Just as Abraham Lincoln's letter suggests, Eliza Gurney, the widow of the English Quaker Joseph J. Gurney, visited President Lincoln about two years earlier, assuring him of her prayers during a difficult period in the Civil War. About this time, President Lincoln also had written an unpublished memorandum relating the war to the will of God. His 1864 reply to Mrs. Gurney reveals a continuing thread of interest in that topic, which would reach its height in his Second Inaugural Address the next spring.


Executive Mansion,
Washington, September 4, 1864.
Eliza P. Gurney.
My esteemed friend.
I have not forgotten--probably never shall forget--the very impressive occasion when yourself and friends visited me on a Sabbath forenoon two years ago. Nor has your kind letter, written nearly a year later, ever been forgotten. In all, it has been your purpose to strengthen my reliance on God. I am much indebted to the good Christian people of the country for their constant prayers and consolations; and to no one of them, more than to yourself. The purposes of the Almighty are perfect, and must prevail, though we erring mortals may fail to accurately perceive them in advance. We hoped for a happy termination of this terrible war long before this; but God knows best, and has ruled otherwise. We shall yet acknowledge His wisdom and our own error therein. Meanwhile we must work earnestly in the best light He gives us, trusting that so working still conduces to the great ends He ordains. Surely He intends some great good to follow this mighty convulsion, which no mortal could make, and no mortal could stay.
Your people--the Friends--have had, and are having, a very great trial. On principle, and faith, opposed to both war and oppression, they can only practically oppose oppression by war. In this hard dilemma, some have chosen one horn, and some the other. For those appealing to me on conscientious grounds, I have done, and shall do, the best I could and can, in my own conscience, under my oath to the law. That you believe this I doubt not; and believing it, I shall still receive, for our country and myself, your earnest prayers to our Father in heaven.
Your sincere friend
A. Lincoln.