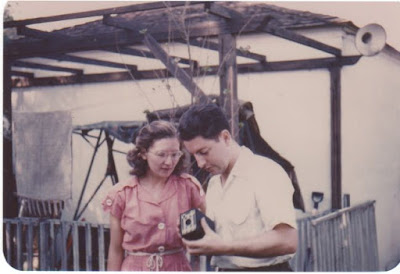 Grace and Dave in backyard of the Burbank house 1947

My dad was an excellent driver.  As far as I know he never had one accident while driving up and down the coasts of the United States, and through all states in between.  I don’t remember our first car, which we probably owned in California before we moved to Alaska.  In Alaska we used the government van, which belonged to the Weather bureau.  I don’t remember ever riding in the van though.   I recollect walking everywhere in Fairbanks, as the school, church, and our aunt, uncle, and cousin’s house were near by.  We did ride in our riverboat down the Chena River several times during break up, which was in about July.  When one or the other of us needed to go to the rest room we would stop on one of the islands that had emerged as the river lowered, and use the outdoors.  My sister refused to use the outdoors as a rest room so we brought along a wooden potty chair for her to use on the island which we dubbed “Potty Chair” Island. 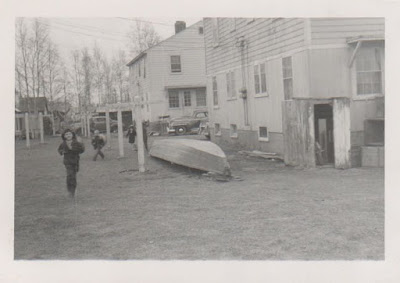 River boat on the right.  We would sing cruising down the river on a Sunday afternoon.

My dad’s first car purchase when he arrived in Virginia, after our move from Alaska, while my mom, my 3 siblings, and I stopped to visit our grandparents near Spokane, WA, was a 1949 or 1950 two door, black Ford, with a front seat only.  The back had room for a seat but I believe my dad was of the opinion that you stack kids in the back just as you would the groceries.  Sometimes this plan didn’t work so well as they left me at church, one time, when they failed to count heads.  After that I stuck very close to my mother so I wasn’t forgotten.  We drove the Ford for several years until my next to the youngest brother, at 2 or 3 years of age, figured out how to climb into the car, release the emergency brake, and coast into the nearest tree.  My oldest brother, who was about fourteen, was furious as he had wanted to drive the car, but was forbidden to. 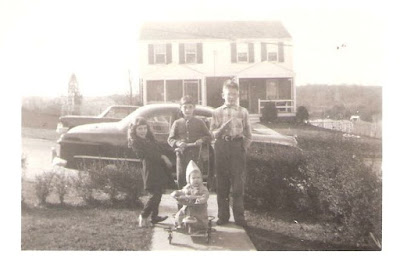 One October, Dad drove his, bald tired, Microbus up Belleview Blvd hill in Alexandria, Virginia on his way home from work.  He passed all the tract housing surrounded by freshly cut and edged smooth golf course emerald lawns sprinkled with the first snow of the season.  The street had barely an inch of snow. But many others could not ascend the steep road because of slipping and sliding back down to the bottom not being able to maneuver on the slushy street.  Dad had no trouble maneuvering around those who had failed to make the assent.  He had grown up in Spokane, Washington, and knew how to drive in adverse conditions. 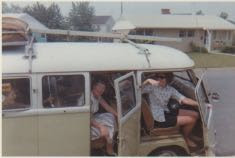 This must have been owned by my brother Jay or it could have been purchased after the last one was sold.  We tended to use Jay's cars as a second car as long as he got to drive it

The lawn at our house was the only lawn, which was brown at that time.  Although the snow did start greening it a bit. We conserved water even then in the 50’s by not watering. We didn’t have to mow our grass as a result.