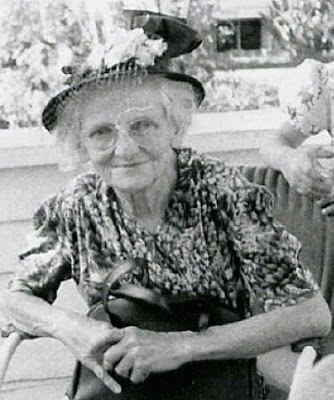 Grandma Edson was a small woman.  She could walk beneath the low branches of her apple trees and barely tap her head.  Her hair was as white as the farm house she lived in, and her eyes blue bell blue, like the wildflowers sprinkled over the fields around her fifteen-acre wheat farm in eastern Washington.  She could eat a piece of toast with her coffee at breakfast and smack her lips to convey to us her enjoyment.  Because of her delight everybody else would want a piece of toast too.  She gathered up corn, beets, carrots, and maybe some tomatoes, peas, or green beans every day from the acre truck farm, for our dinner.  The garden was just down the hill from the house and down the hill from the covered well that Grandpa had dug.

Grandma was an organic farmer before it was popular.  She’d plant marigolds around the garden to keep bugs away.  She’d spear stakes into the ground and place empty tin cans upside down on each one.  Early in the morning, she would take a boiling teakettle of water out, take the cans off one at a time, and pour boiling water on the unsuspecting earwigs underneath.

On days when we would drive into Spokane for a picnic with other relatives, or shopping, we drove west, into the sun, on the way back home to the farm each evening.   From the back seat, we would hear Grandma sing in her mellow, comforting voice,

“See, the sun is sinking in the golden west.
Birds and bees and children, all have gone to rest,
And the merry streamlet, as it runs along,
With a voice of sweetness
Sings its evening song.

Cowslips, daises, violets hang their tiny heads,
All among the grasses, flowers are in their beds.
Mothers of little children, as the stars go by,
Hush them by gently singing this little lullaby.”

Grandma’s soft skin wrinkled early and she had developed a hump on her back, which was always there as far back as I could remember.  She wore round steel rim glasses.  On town days, she would don her blue dress and blue hat.  Her purse was large and black and she would always hang on to it as if she might misplace it if she put it down.

From the time I was thirteen, when I begged my parents to let me go to the farm for the summer, even though they weren’t going that year, Grandma wasn’t afraid to tell me good things about myself.  She told me that I was pretty and she appreciated my politeness.  My mother tried to tell me nice things about myself but she was so busy with five kids she didn’t always have time to think.  So Grandma was the first person who really noticed me-- other than my Aunt Ruth who helped me put on a “show” for the wire tape recorder when I was just five.  (At seven my Aunt Evelyn complimented me for keeping my pants dry when I was playing “raft” in the
nearby gravel pit.  My Aunt Jeanne was amazed at me when I was 7 or 8 and I wouldn’t throw a rock when the boys were treating me poorly. She said my cousin Janet would have thrown a rock.) 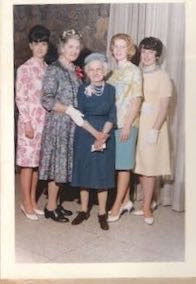 My cousin, Dorothy, and I, the summer of our 15th year, walked along the hot dry dusty farm road the wind gently blowing the threads on my unhemmed cut off jeans.  Dorothy, as usual, had on smart shorts, which coordinated, with her matching top.  Our tanned legs and feet caused puffs of dirt to float toward Grandma’s house, which by that time of year was surrounded by stubble wheat fields.

“I love being at the farm in the summer,” I said.  “No school, no chores, nothing to do but relax.”  (We did help snap the beans or shuck the corn, wash dishes, and clean up after dinner, but they didn’t seem like chores to us because we were on the farm.)

“I can’t wait to get my drivers license next year,” said Dorothy.  Maybe I can borrow my folk’s car and we can drive around the back farm roads and even go to the drive in.”  (We didn’t know that our parents would make sure we didn’t have a car available, but that my older brother, Jay, would drive us to the drive-in in a VW Microbus.  We’d take cots, set up our row in front of the car, and stretch out while we watched the movie.)

“I’m not getting my license.  I took the written test at the urging of the valedictorian of our class, and failed it.  If I had known I was going to take the test I would have read the book!” (I got my license after I got married.)

To reach the farm each summer Dorothy had come from Fairbanks, Alaska and me from Alexandria, Virginia.  Dorothy was as blond as I was brunette, we were the same height and weight, that summer.  (The summer we were 13 Dorothy was a little taller than I was.)  Even though we were first cousins, we were as close as twin sisters would be.  I had always admired people with blond hair and blue eyes.  Maybe it was because I had two blond aunts, five blond cousins, and two blond uncles.  Everybody in my family had blue eyes, except my mother and me, we had green eyes. We all had brown hair of different shades, except the next to the youngest brother who was a strawberry blond.

We passed the locust tree where we had spent many hours when we were younger.    Uncle Beanie, Grandma’s older brother, had installed a swing hanging from the sturdy branch of this huge locust tree in the side yard. A wooden seat on a heavy rope, which he had tied way up about ten or twenty feet, on a sturdy branch,  hung down almost to the ground.  We took turns swinging as high as we could in the cool shade from the time we were small, until we were teenagers, and the swing no longer appealed to us.
We spotted Grandma in the garden, “Hey Grandma, is it okay if we pick one tomato each?”
“You girls go ahead,” she smiled, waved, and went back to her gardening.
We each picked a giant tomato, washed them under the cool well water from the hose, and took a bite.
“This is the best tomato I will ever eat!”  I said.
“Me too,” agreed Dorothy, as she jumped back so as not to get tomato juice on her clean shorts.

After I grew up and got married, my husband and I would pick Grandma up during the Christmas holidays, and take her for a tour of the Christmas lights in Spokane.  She would oo and ahhh and we would appreciate the lights even more just because she was with us.  I want to be just like her.

Now it is your turn.  What are some of your happy childhood memories?