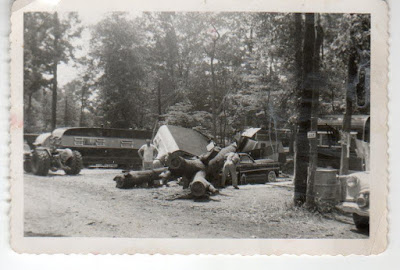 This picture was taken of one of the trees that fell in Woodley Hills during hurricane Hazel.

It happened on Friday, October 15, 1954.  I was eleven years old and living in Woodley Hills Trailer Park in Alexandria, Virginia.   My older brother was 13; my little sister was 7, and my next to the youngest brother was 2.  My youngest brother wouldn’t be born until June of 1956.

Anyway, my dad, a meteorologist who worked at the National Analysis Center in Suitland, MD, had driven our car to work that day.  Mom was busy watching all of the neighbors evacuate because of the hurricane expected to make landfall that day.  I don’t have a clue as to why we didn’t evacuate as we lived in a 32’ trailer.  Most people in trailers need to find a solid building or shelter, I understand, if a hurricane is expected.  But the forecast had been that the storm was to slow down from a cat 5 to a cat 4 when it made landfall in the Carolinas.  Maybe that is why we didn’t leave.

But looking back at what Hazel did maybe we should have evacuated.    The write up in Wikipedia reports this, “Hurricane Hazel was the deadliest and costliest hurricane of the 1954 Atlantic hurricane season. The storm killed as many as 1,000 people in Haiti before striking the United States near the border between North and South Carolina, as a Category 4 hurricane. After causing 95 fatalities in the US, Hazel struck Canada as an extra tropical storm, raising the death toll by 81 people, mostly in Toronto. As a result of the high death toll and the damage Hazel caused, its name was retired from use for North Atlantic hurricanes.
From Carolina, it traveled north along the Atlantic coast. Hazel affected Virginia, West Virginia, Maryland, Delaware, New Jersey, Pennsylvania, and New York; it brought gusts near 160 km/h (100 mph) and caused $308 million (1954 USD) in damage. When it was over Pennsylvania, Hazel consolidated with a cold front, and turned northwest towards Canada. When it hit Ontario as an extra tropical storm, rivers and streams in and around Toronto, Ontario overflowed their banks, which caused severe flooding.”

I believe that the Lord protected us that day.  Our neighbors, the Taylors, remained behind in their trailer, and during the eye, a pause in the storm, (hurricanes are in the shape of a doughnut with the middle a hole, which they call the eye,) Mr. Taylor walked all around our trailers looking at the huge trees to see if any were in danger of falling.

The next day we learned that one trailer and car a few streets over from us, had been crushed by a huge tree falling on them.  Maybe our lives were in danger that day but we came through just fine.

Where were you during Hurricane Hazel?

PS I was saddened to hear that Typhoon Haiyan hit the Philippines at an estimated 195 MPH with up to 235 MPH wind gusts.  Here is a photo of some of the damage.  We were blessed in Virginia not to suffer such destruction or loss of life.