Slow to Anger or Just Slow

When my dad was a little boy he was given a wagon for one birthday.  He took it outside and immediately the neighbor kids took the wagon away from him and he watched them play with it.  The next morning he told his mom what had happened and he said, “I relents that!”  He resented the kids had taken the wagon away from him but didn’t realize it until the next day.  Was he slow to anger or just slow?

I also have that problem with slowness.  Recently I found a letter written to my mom by my aunt when I thirteen years old and spending the summer with her and my cousins at my grandparents farm.  As a very young looking 13 year old, (see the picture below), I had traveled from Alexandria, Virginia to Eau Claire, Wisconsin, by bus, so that I could ride the rest of the way to Spokane, WA with my aunt and uncle and cousins.  In the letter my aunt said that I was very self-controlled and that it was —“Not normal for a teenager!”  What?!  Teens can’t be self-controlled?  I think we all have different personalities and for some of us we just aren’t built to get angry.  Take Rachel—the gal from the You Tube who stayed very calm and didn’t get angry with the patron who was trying to goad her at Chick Fil A.  In an interview she said that it was her training and her personality.

Do some of us have it easier than others as far as anger control?  I think it is.  Each of us has something that God wants to help us work on.  As for me I have to force myself to analyze the situation and decide if it was something that I would be angry about later and then decide what to do.  Is this something that I should let go?  Is it something that would anger Jesus? Am I enabling someone to have bad behavior?  What are my interests as well as the interests of others?  It all amounts to the question of what would be the most loving thing to do?

I'm first on the left holding hands with my cousin who is a month younger than me. 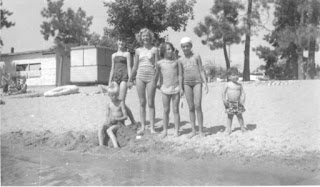